As I slowly but surely make my way through Humphrey Bogart’s body of work, some movies stand out for different reasons. Bogie is associated with a ton of classic films, and even people who haven’t seen his most famous movies still likely recognize titles like Casablanca, The Maltese Falcon and The Treasure of the Sierra Madre. Any film fan would be hard-pressed to hear those names without instantly having Bogart’s careworn face spring to mind.

Yet, for all of the classics that Bogie appeared in, there are plenty of movies with him that are notable and well worth watching but that seem to fly under the radar. One of the things that I love about all Hollywood between the 1930s and the 1950s is the way the studios cranked out movies at an unbelievable pace. Each and every week, studios like Warner Brothers, Fox, Paramount, and RKO pushed out a new release for a hungry audience. Some of those movies have gone on to be considered classics, but the majority of what studios produced during those years occupy a lower tier of acclaim. Dark Passage is one of those movies that I was mostly unaware of before I watched it, and that’s a shame. 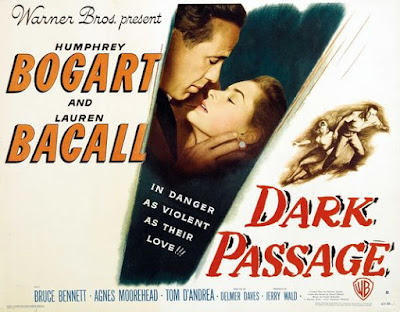 The 1947 film, written and directed by Delmar Daves (the original 3:10 to Yuma), opens with a prison break and a twist. The twist is that the film puts the viewer in the first-person perspective of the prison escapee (Bogart) as he makes his escape. When I think of experimental or unconventional camera work, I tend to think of guys like Brian De Palma, Scorsese, even Ford and Leone to an extent, but it’s easy to forget how far back people were tinkering with the medium. As a matter of fact, this first person perspective was used in another film noir earlier the same year, with Robert Montgomery’s Lady in the Lake, so subversion was obviously in the air. Dark Passage uses all sorts of tricks and plot devices so that we don’t see Humphrey Bogart’s face in the film until after the half-way point, even though he’s the male lead. After the prison break, Bogart decides to visit a back-alley surgeon to have a facial reconstruction operation and spends a good amount of time covered in bandages. Warner Brothers co-founder Jack Warner was reportedly very upset that they’d hidden the face of one of his biggest stars for more than half of the movie.

Bogart’s real-life wife Lauren Bacall co-stars, and their charisma on screen is evident. They made four films together, and this is the third of the four. Bacall smolders, SMOLDERS, I tell you, and threatens to set the whole film on fire with her gaze. She’s dangerous, mysterious, and tough as nails with a touch that’s as light as a feather. She knows what she wants and she isn’t afraid to go for it. There’s a reason she’s known as one of the sexiest dames in all of cinema, and Dark Passage puts it on front street. 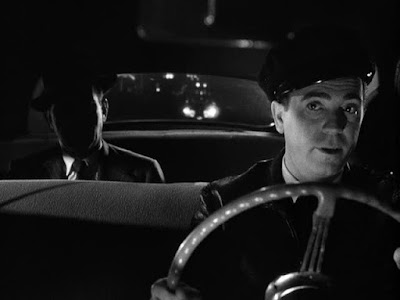 Also appearing in this movie as a busybody meddler is Agnes Moorehead. Because I wasn’t watching many older movies until a few years ago, it’s always a joy for me to connect the dots with certain actors that I know from other things. In this case, I knew Agnes Moorehead not from movies like this one or Citizen Kane, but from her role as Endora on the 1960s television show Bewitched. I can’t tell you how excited I get when I realize that a television actor had a flourishing film career in the decades before they came to television. Side note: another example of what I’m talking about was when I realized Carolyn Jones had been in a bunch of great noir films, horror movies, and westerns before she took the role of Morticia Addams on The Addams Family. 1950s and 1960s television seems to be where too many actors of the 1930s and 1940s ended up in an attempt to pay the bills. BUT I DIGRESS. At any rate, Agnes Moorehead is OUTSTANDING in Dark Passage, and you can’t help but be a little bit sad when you see her range, because it feels to me like so much of her talent was wasted in her television comedy appearances.

Like most good noir films, Dark Passage keeps the viewer on the hook from the very beginning and then never let’s us exhale. Will Bogart get captured by the police? Is he telling the truth when he says he was framed for the crime that landed him in prison? Who is the person that keeps following him in the shadows? What does Bacall’s character stand to gain from helping him? As the spiders on the web circle closer and closer, we wonder if Bogie is going to be able to make a getaway, and if anyone would believe him even he can prove that he’s an innocent man. 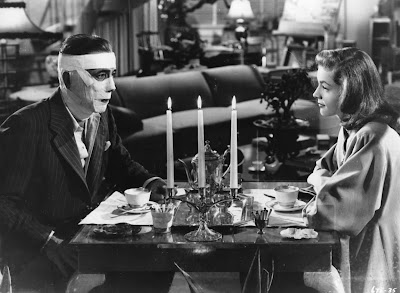 As you can probably tell, I like Dark Passage a lot. I watched it with my wife, who is not normally inclined to sit and watch film noir, and we were both really impressed with the pacing and the characterization. It’s just a solidly written, directed, and acted film that doesn’t get a lot of attention. On the DVD extras, someone (I think it’s Leonard Maltin) comments that it’s not a great movie, but it’s a GOOD movie. Too many times I think I can get caught up in what’s great and what sucks, and decent movies that tell good stories in a capable way tend to get overlooked. I think back on Patrick’s comments about Ben Affleck’s The Town, that “every movie should be at least this good.” That sentiment applies here. Dark Passage is not Casablanca, but it takes some chances and does some really interesting things, both in front of the camera and behind it. The deeper I delve into the films made during this time period, the more I’m drawn to less-famous genre pictures that take risks and do unconventional things with their storytelling.

Unfortunately, the movie didn’t do particularly well back in 1947, and there are probably a few reasons why. It can’t have helped that Bogart spends the first hour of the movie either out of frame or covered in bandages. Behind the scenes, Bogart was also taking heat for his outspoken opposition to the actions of the House Un-American Activities Committee and their anti-communist agenda in Hollywood. In other words, Bogie was outspoken in favor in the First Amendment and against the Red Scare witch hunts that led to the blacklisting of something like 300 filmmakers and actors in Hollywood. All of this was happening at the same time as the release of Dark Passage, and the film performed poorly at the box office. Maybe that’s why the film still doesn’t seem to have the same reputation as many of Bogie’s other films, even after all these years. Or maybe it’s because the film isn’t afraid to explore the shadows and the things that live there. That would be unfortunate if it were true, because some truly wonderful things can be found in the dark.

Dark Passage is currently streaming on Amazon Instant Video and is also on DVD.