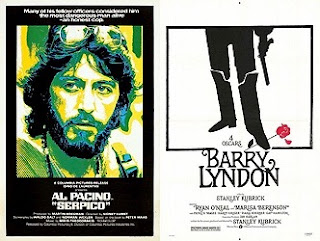 For this installment, Adam Riske and I decided to delve into some excellent movies from the '70s. Adam watched Barry Lyndon (1975) off of my unwatched list, and I saw Serpico (1973) for him. We felt like more people need to talk about how good these movies are.

Adam Riske: I'm a big fan of 1970s Al Pacino (and Al Pacino in general) and I'm trying to be a good film student and catch up on what movies of his of note that I've missed including Serpico, Sea of Love, Frankie and Johnny, and Looking for Richard.

Mark: I've been fascinated with Stanley Kubrick for a lot of my movie life, but his filmography is a large gaping hole in my viewing. TRUE STORY: In addition to Barry Lyndon, I still haven't seen 2001, or The Killing (even though Patrick lent it to me), Lolita, or Eyes Wide Shut. I'm the worst.

Adam Riske: I'm envious of you. Kubrick is either my favorite or second favorite director (depending on the day) and Barry Lyndon is by far his most underrated movie. I think it's a masterpiece, along with 2001 and The Killing from the list you gave. 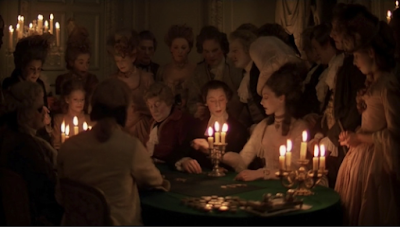 Why hadn't you gotten to watching these acclaimed movies yet?

Adam Riske: I'm not really sure. It took me a long time to get to Dog Day Afternoon but I finally did. I'm woefully behind on my Sidney Lumet movies.

Mark: I think that Kubrick's movies are so demanding that I need to be in the proper mindset to watch them. Like, I need to prepare to be intellectually and philosophically challenged, and I don't always have the energy for that type of heaviness. I feel like I need a whole weekend to ingest Kubrick, and who knows how long to digest it.

Adam Riske: I can see that. I would recommend watching Barry Lyndon on a lazy afternoon where you can start it at 1pm and take a break during the intermission.

Adam Riske: I'm not sure what your temperature is for Stanley Kubrick, so it's tough to say. Even if you don't like Barry Lyndon, though, you'll have to marvel at the pure filmmaking of it all from the cinematography to the costumes to the music, which is hypnotic.

Mark: I love the way New York is portrayed in movies from this specific decade; tough, grimy, but totally rich with life and activity. Even though it's depicted as a tough place, the movie is never mean spirited or hateful toward the city, and it's what makes what Frank Serpico sees as a cop that much more impactful. Al Pacino is fantastic in this movie (he was nominated for Best Actor), and it's worth remembering the kind of acting he can do. He's at the top of his game here, playing an intellectual, honest, but conflicted character that has to fight off the wolves every step of the way. 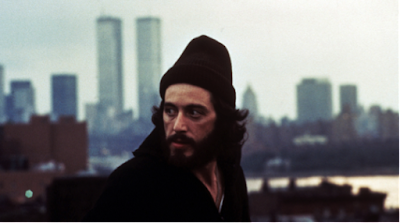 Adam Riske: It's long and methodically paced so it's something I'd say is best watched when you have a full afternoon or evening and can afford to get lost in a movie. Also, Ryan O'Neal is not the best actor but he's great in this movie. He's playing a specific kind of brat character, like teen Anakin -- and he's terrific at playing that -- but make no mistake that he's an unlikable protagonist.

Mark: You had me at “teen Anakin.” There isn't a lot to dislike in Serpico. Some of the dialogue didn't seem to be mixed well into the sound (I watched on Netflix streaming). Some of Serpico's interaction with his personal relationships might come off as a little shrill, but that's not how they came off to me. You might not enjoy that Pacino looks more like Jesus the further the movie goes along.

Adam Riske: Warner Bros. would only finance the movie if Stanley Kubrick cast a top 10 box office star at the time in the title role. Because of this (and the age of the character), his choices were limited to Ryan O'Neal and Robert Redford. Redford turned down the role, so O'Neal was cast.

Mark: I’m a little sad that we missed out on teen Anakin Robert Redford. I learned that Frank Serpico is an actual police office whose life was the basis of the film and his career and experiences led to changes in New York's police department.

Barry Lyndon and Serpico are comparable to what other movies?

Adam Riske: I like Marie Antoinette, but Barry Lyndon is a much better but similar movie.

Mark: Serpico reminded me of other Pacino work of the time (like Dog Day Afternoon). Outside of its time, and compared to other cop movies, I think it's better than Training Day (which I love), and I think it's on par with something like The Departed or Chinatown. 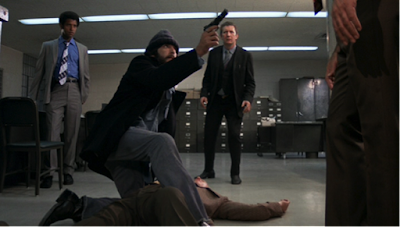