All kinds of movies this week. 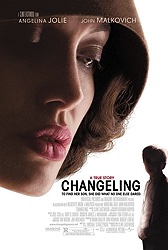 Adam Riske: Changeling (2008, dir. Clint Eastwood) Clint Eastwood has made some stinkers of late but his crime drama, Changeling, from 2008 is actually really good and underseen by most. It's based on a true story, the type of story that makes you both emotional and gets under your skin. I remember seeing this movie years ago (after hearing that it wasn't very good) and being quite surprised by those reactions. It's really gripping. 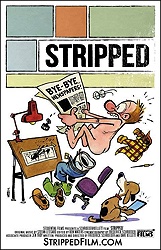 Adam Thas: Stripped (2014, dir. Dave Kellett, Frederick Shroeder) If you are anything like me, the only part of the newspaper you really read growing up was the comics. As a fan of the comic strip, Stripped delivers by interviewing just about every person who has ever done a newspaper comic strip. As an illustration and comic fan, I found the entire history of the medium absolutely fascinating as well as how someone makes a living drawing a daily comic strip. Interestingly, though, Stripped takes a turn after the first few minutes and starts to explore what is essentially a dying art form. With the death of newspapers throughout the country, you are also getting the death of the comic strip. Stripped takes the time to interview multiple artists from different generations and how each of them is dealing with the influx of digital media and how this art form is going to survive. From opening to the end credits, I was fascinated with this one and recommend it for all you comic and movie fans out there. 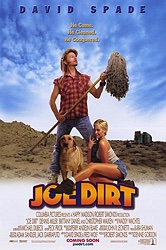 Heath Holland: Joe Dirt (2001, dir. Dennie Gordon) I have a big soft spot for Joe Dirt. Maybe it's because I always appreciated David Spade and his particular brand of sarcastic snark. Maybe it's because I live in the south and the character he portrays is only a slight exaggeration of a real kind of person. Maybe it's because he's parodying southern culture in a way that doesn't feel judgy and still has some heart and affection behind it. In case you're wondering, I haven't been able to bring myself to watch Joe Dirt 2: Beautiful Loser on Crackle because I'm afraid the things I like about the original movie won't be there anymore. 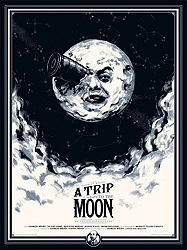 JB: A Trip To The Moon (1902, dir. George Melies) I know that this is going to be a busy weekend for all F This Movie! readers, what with Pixels and Southpaw to see in theaters and The Wolfpack to enjoy On Demand, so I am suggesting something short. Melies’ seminal short is required viewing, even if both versions currently available on Netflix Instant are compromised. The “color” version, the recent Lobster Films restoration of an original, hand-tinted print, suffers from “gate float” so the image is constantly snapping in and out of focus—annoying, but I guess we should count ourselves lucky to have any version of this at all. The hand-tinted version also featured a new score by AIR, about which the less said, the better. For “purists,” the fine folks at Netflix also offer a black and white version, with worse, but more consistent, image quality and a bizarre “soundtrack” featuring asinine narration and unnecessary dialogue. My preference would be this version, though, if only because when the “Moon Man” has his eye punctured by the rocket in the film’s most famous image, what comes out of the wound looks a lot like delicious custard in the black and white version. In the hand-tinted version, it looks more like bloody pus. Yuck. I would really like to see this someday with a straightforward organ score and black and white image quality like the clips used in Scorsese’s Hugo. For twenty years or more, the print I showed in class was missing the last 90 seconds, showing the scientists honored and the statue erected. It’s nice that footage has finally been restored! 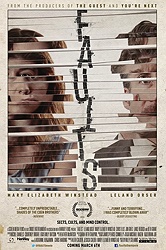 Patrick: Faults (2015, dir. Riley Stearns) The debut feature from Riley Stearns (who is married to star Mary Elizabeth Winstead) is part chamber drama, part black comedy, part...something else. Character actor Leland Orser, finally given the opportunity to step into a lead role, gives the performance of his career as a pathetically down-on-his-luck author hired to deprogram a woman (Winstead) from what her parents believe is a cult. Most of the film takes place between the two actors in a single hotel room and is hypnotic throughout. Even when I'm not sure it adds up to a whole lot, the getting there is always compelling. Stearns announces himself as a filmmaker to watch.
Posted by Patrick Bromley at 12:00 PM