All due respect to Zac Efron, but WE are your friends. We tell you what to watch on Netflix. 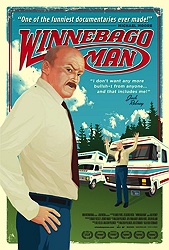 Adam Thas: Winnebago Man (2009, dir. Ben Steinbauer) Andy Warhol once famously said that “Everyone will be world-famous for 15 minutes.” An interesting statement by itself, but Winnebago Man continues Warhol’s quote by exploring what would happen if you were completely embarrassed by those 15 minutes. Much like the Jerky Boys and the Tube Bar Tapes, the Winnebago Man started as a video that had been passed around for years made up of outtakes from a Winnebago sales commercial in the '80s. The tapes gained notoriety through “Found Film” festivals and the fame grew. All the while, the man who had been known as the “Winnebago Man,” Jack Rebney, seemed to drop off the earth. Winnebago Man follows the director Ben Steinbauer in search of Mr. Rebney. At this point I am going to stop playing spoiler and hope you see the movie. What I will say is that I got completely swallowed by Steinbauer’s quest and the story behind this tape as it slowly unravels. There are so many themes going on in Winnebago Man from such a simple subject as it explores the many people that have been impacted by this seemingly forgettable video shoot. At only 85 minutes, Winnebago Man is definitely worth the time. 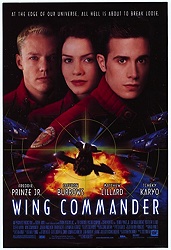 Heath Holland: Wing Commander (1999, dir. Chris Roberts) A few months before Freddie Prinze, Jr. and Matthew Lillard appeared in She's All That, they starred in this unfortunate clunker. Why am I recommending this movie? Well, while Wing Commander isn't even close to being good, it offers a fascinating case study. The movie is based on an extremely successful video game series of the same name, but the video game differs from the movie in that it had experienced actors like Malcolm McDowell, Mark Hamill, Christopher Walken, and John Hurt holding down major roles instead of Prinze, Jr, and Lillard. The movie -- which was distributed by 20th Century Fox -- also takes a major turn away from the established universe of the games, leaving its devoted fan base completely cold and failing to ignite interest from a general movie audience. Remind you of anything at the theater right now? Here's the thing, though: the movie wasn't directed by someone who didn't have experience with the property. It was directed by the CREATOR of the video games, Chris Roberts. The dude that made the games such a huge success and created a universe full of depth and gravitas is the same guy who was in charge of making the movie. SO MANY QUESTIONS. Also, even though it's a failure, Wing Commander is not as bad as people make it out to be, and it's perfect for late night viewing. 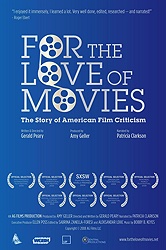 JB: For The Love of Movies: The Story of American Film Criticism (2008, dir. Gerald Peary) Clearly, I was attracted to the subject matter of this documentary, but initially put off by its style and structure. The film is broken into too many little bite-sized sections, as if its source, Public Television station WGBH Boston, was planning all along to show it on pledge nights, interrupted every fifteen minutes with fevered appeals for additional funds. But I stuck with it, and I am glad I did. The film clips are great and well chosen. (Hint: You have seen too many movies when a short clip of Edwin S. Porter’s 1906 Dreams of a Rarebit Fiend is shown, and you shout, “DREAMS OF A RAREBIT FIEND!” before the filmmakers identify it onscreen.) The script and narration are both top notch. The film’s treatment of the ongoing battle between Pauline Kael (who I read avidly in high school) and Andrew Sarris is probably the high point here. The importance of Roger Ebert and Gene Siskel on television is discussed. The film features some interview footage with Ebert when he could still talk, which left me wishing that he was still alive. The film concludes with talk of the myriad movie websites, blogs, and podcasts that sprung up in the Internet age to supply a new generation with insightful criticism. F This Movie! is not mentioned (although, to be fair, we did not exist in 2008.) Boo. 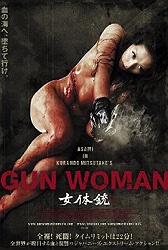 Patrick: Gun Woman (2014, dir. Kurando Mitsutake) Half of this Japanese import from last year is deliberately provocative trash -- crazy violence and rape and people having sex with corpses. Shock me, shock me, shock me with that deviant behavior. But the back half of the film, in which a young woman (Japanese porn star Asami) is trained by an older man to be an assassin (yes, another one of those), takes some insane and inspired turns. They have to sneak a gun into an impenetrable fortress, and the only way to do it is to cut the heroine open and sew the pieces inside her -- and that's just the jumping off point for what follows. Only recommended for those with strong stomachs and a tolerance for this kind of "extreme" cinema, but the good here manages to outweigh the bad...just barely.
Posted by Patrick Bromley at 12:00 PM