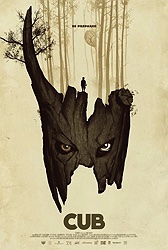 There are two reasons I never joined scouts: I don't do well in the outdoors and all of the murderous children.

I first became aware of the Belgian horror film Cub (aka Welp) when it screened at Austin's annual Fantastic Fest last year. The premise -- or what I believed to be the premise -- sounded completely inspired: a killer-in-the-woods movie acted out by a group of young scouts. I was in, so much so that I named it as one of the films I was most looking forward to in 2015. Having now seen it, I can say that it is not the movie I was hoping it would be.

A group of 12-year old scouts venture into the woods under the watch of pack leaders Chris (Titus De Voodgt) and Peter (Stef Aerts). They tell their pack the story of Kai, a werewolf who supposedly haunts the woods. When the oft-bullied Sam (Maurice Luijten) meets a feral boy in the woods that he believes to be Kai, all hell breaks loose as the campers come under attack. 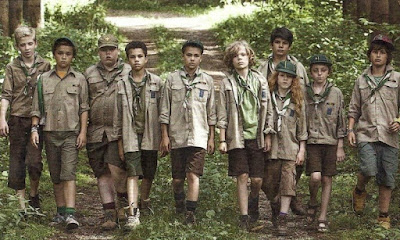 While technically well made, Cub is a complete disappointment as both a narrative and as a horror film. There's no way to suggest I was curious about a slasher movie played out by children without sounding like a sociopath, but if the shoe fits, right? The "hook," as I understood it, was the thing that would distinguish Cub from the dozens of other indie horror films released ever year. I can't fault the movie for not being what I thought it was going to be -- and it isn't -- but I can still fault it for not being the best possible version of the movie it actually is.

Cub's biggest issue is that it doesn't seem to be sure what it actually is. Part slasher film, part slasher subversion, part survivalist horror, part High Tension-style psychological head trip, the movie is just too confused to settle on being anything long enough to make it work. I'm someone who loves it when a movie can be multiple things (especially at a time when so few movies can even be good at just being one thing), but that has to come from a place of intent. Cub's messiness doesn't come from a place of intent. Director and co-writer Jonas Govaerts doesn't seem clear on what movie he wants to make, creating something that is at the same time unfocused and low on ambition. The film is unable to do what it's not sure it wants to do well. 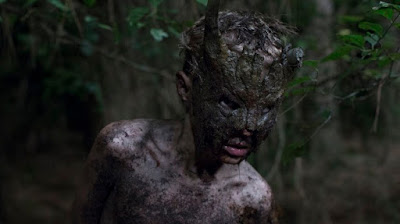 To speak too much about my issues with Cub would require too many spoilers, which makes it a difficult movie to talk about. The young cast is ok but totally underutilized, with De Voodgt and Aerts getting the most dialogue as the good cop/bad cop scout leaders who serve little function except to provide a negative reflection of adulthood and authority. That might mean something if the film had a different point of view about the young characters, but they mostly suck, too. If the message is just that everyone is the worst, why make the movie about kids in the first place? Campers of any age could be attacked by a feral kid. Failing to find any kind of thematic resonance to the film's most significant storytelling choice renders it meaningless.

It also fails to deliver the goods as a horror movie. More than half the running time is devoted to set up (though this begs the question: what is it that is being set up?) and the back half rushes through what we normally pay to see in one fell swoop. There are a couple of effective and particularly nasty moments -- ones that aren't really earned, actually, but then the film can't take a consistent attitude towards any of its characters. For the most part, it feels like it's going through the motions until the time comes to break its own rules and invent new conflict in the hopes of introducing a twist. 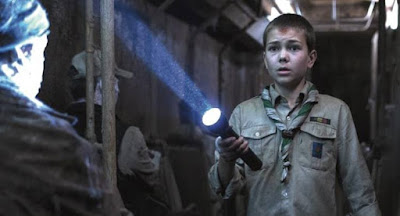 I'm sure some of my disappointment in Cub comes as a result of my own inflated expectations. The movie is...fine. It's not a complete waste of time, but it also fails to add anything new to the genre. It's just kind of there. My indifference turns to frustration only because there's a compelling movie in here somewhere, one that Govaerts fails to whittle out. It's like the famous scout motto says: "Be prepared...to be let down."