Underestimating this movie is a BIG MISTAKE.

If movies had ended in 1993, I’d be okay. I’ve recently come to the conclusion that the movies that mean the most to me were made within and before 1993. I had suspected as much for a while, but F This Movie Fest 4 was one of the final confirmations that most of my cinematic passions lie in 1993 and earlier. My preference has a lot to do with my age, but it also owes to the way that movies were being made then, before CGI became widespread and everything became EPIC. Movies made in and before 1993 were allowed to be big and dumb and earnest and sweet and have a good time just for the sake of having a good time, and 1993 seems like the last year where Hollywood made THAT kind of movie. Last Action Hero is one of THOSE kinds of movies, and of course I was there when it came out and thought it was great. My affection for the film was helped by the fact that I didn’t really see many R-rated movies (unless they were on basic cable, sanitized for my protection) until I was well into high school, so this PG-13 action film starring Arnold Schwarzenegger was one of my first real experiences seeing an Ahnuld movie theatrically. Don’t worry, many more followed.

Something happened over the years, though. Last Action Hero--a borderline financial and critical disappointment—started to get beat up by a lot of my friends and coworkers. The movie and the marketing around it was definitely a massive miscalculation: there were toys and video games and a CD soundtrack, and the audience for this massive media push didn’t show up like Columbia Pictures needed them to, which is when the backlash began. I worked the video counter at a local grocery store during high school, and there weren’t a lot of good things being said about the movie. Later on, people started to watch Last Action Hero and think that it’s stupid and isn’t in on the joke, and that they are so much wiser and experienced than their entertainment (a phenomenon that’s everywhere now). I assumed the position of a Last Action Hero apologist, defending it to people by saying “it’s not that bad.” Well, I’m almost embarrassed to admit it, but I just recently watched the film again, and it doesn’t need my defense. It holds up just fine all by itself.

The fact is, Last Action Hero is smart. No, it’s not smart in the way that a Christopher Nolan movie is, and it’s not going to compete with Primer in the fancy book-learnin’ category, but it knows what its going for and only wants you to follow where it leads you and try to enjoy yourself. Patrick has pointed out that Arnold Schwarzenegger is frequently cast to play “the other,” a double of himself or a robot or an undercover agent, etc., and he does so here by appearing both as himself the actor and as the action movie character Jack Slade. Detractors cry “that’s stupid!” but the movie KNOWS it’s stupid and has a lot of fun with the concept. It even allows Schwarzenegger to parody the kinds of movies that made him famous and have quotable catchprashes (like “I’ll be back;” this film’s catch phrase is “Big mistake”). Last Action Hero even has the actor appearing as a machine-gun-wielding Hamlet with the trailer narration stating “Something is rotten in the state of Denmark, and Hamlet is taking out the trash!” “That’s so lame!” cry the cool kids in the back row. The movie knows this. It’s not just a parody of Arnold Schwarzenegger’s movies; it’s a send-up of the way films were being made at the time. Remember, this was one year after Keanu Reeves was cast in Bram Stoker’s Dracula. This movie understands that. You can’t dismiss it for being the very thing that it tries so hard to be. 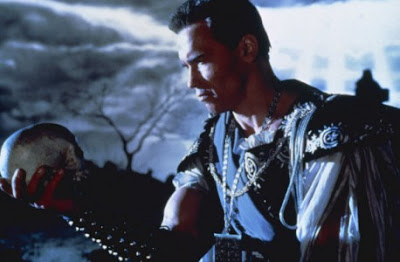 If you haven’t seen Last Action Hero in a while and need a refresher, the premise involves a latchkey kid of around 12 named Danny Madigan (played by Austin O’Brien) who absolutely loves movies. He loves them so much that he skips school to go and see them and stays out long after he should be back home in his unsafe New York neighborhood. When he’s not skipping school, he’s fantasizing about them during his classes and forming the real world around him into an artificial one that plays by movie rules. An old man named Nick (Robert Prosky) runs the projector at the run-down theater where Danny frequents; Nick let’s Danny come in through the back door because he knows he doesn’t have much money. He’s also something of a father figure to Danny, and invites him to see the new Jack Slade movie before anyone else. As a gesture, he gives Danny a magical ticket that had once belonged to Harry Houdini. Danny is transported into the world of Jack Slade, and with it, the Hollywood action movie world of 1993, where Danny will have to help Slade catch the bad guys.

The setting of the film itself is riddled with clichés like the loose-cannon renegade who lost someone close to him, the obnoxious, foul-mouthed police chief, the cop who’s just a few days from retirement, and guns that never need to be reloaded. It’s delightful when you take into account that John McTiernan directed the movie, since McTiernan played a pretty significant role in creating the modern action film with movies like Die Hard and Predator. Furthermore, the script was written by Shane Black and David Arnott. Black, as you probably know, was something of an ction pioneer himself with scripts for films like Lethal Weapon and The Last Boyscout. It’s fair to say that both McTiernan and Black know their way around all the action movie tropes, so they’re ideal candidates to exploit them in clever and subversive ways. 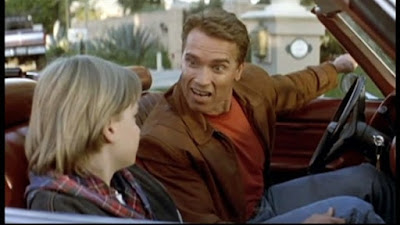 All those jokes and clichés can get a little monotonous after a while. When the premise of the film has run its course (or a little later, unfortunately) the movie turns on its heel and switches things up by bringing Schwarzenegger’s Jack Slade into OUR world, which gives the movie just a little bit more life. Luckily, a little bit is all it needs, because this allows the film to speed toward a satisfying conclusion for both the character of Jack Slade (whom the movie hopes we’ve become attached to) and for Danny Madigan.

There are clever little winks everywhere in the movie. There’s a Terminator 2 joke that incorporates another action icon, and there are these weird little character moments that take me by surprise, like the “real” Schwarzenegger shamelessly promoting himself and Planet Hollywood at a red carpet premiere. There’s a cute peak inside Jack Slade’s closet where we get to see his varied wardrobe. There’s even a cop that’s a cartoon cat, voiced by Danny DeVito. There are other jokes too, like how every woman in the movie world looks like a model. When Danny tries to use this evidence to convince Jack Slade that only a movie would have so many artificial-looking people in it, Schwarzenegger/Slade reminds Danny that they’re in California.

I know the movie doesn’t work for some people, and that’s totally cool. For me, it works for a couple of reasons: first, there’s a lot of heart in the film. It’s a kid’s movie (by 1993 standards, not today’s) that shows that life can be really hard for young people. It depicts the escape from reality that movies offer, which is something every member of the audience can appreciate and get behind. Without the heart and the innocent nature of Danny, the film would feel like a National Lampoon comedy and probably wouldn’t work at all. It’s only because we get the occasional glimpse that the film is acknowledging the absurdity that we are able to have fun with the movie. And that’s really the key: the movie wants you to have fun with it, not at it. It’s in on the joke. In fact, it might be one of the first postmodern action films. 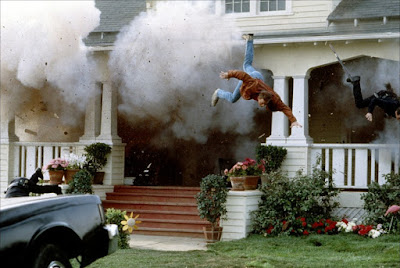 As much as I appreciate what it tries to do, Last Action Hero is not a home run, and not everything works. Some of the jokes fall flat, and at over two hours, the running time is too long for this kind of movie. I’m also not sure that things work tonally as well as they could have. Then there’s the question of the timing of the film. Last Action Hero made back its budget and a modest profit, but it’s not considered a financial success. Is that because it came out the week after Jurassic Park and therefore never even stood a chance, or is that because movie audiences didn’t want to see this in 1993? Would it have fared better a couple of years earlier? What about a couple of years later? Would the parody and self-deprecating elements have played better when the action bubble had completely burst?

It doesn’t really matter now. It’s something of a cult classic now and has found its audience. Sure, that audience may be a narrow, but for those of us who grew up with muscle-bound action stars with foreign accents, Last Action Hero plays like Cinema Paradiso for machine gun kids. Looking back on it, the movie was a big gamble for everyone involved; it’s unconventional and--at times--kind of a mess. In fact, it’s kind of hard to believe that the movie exists at all, but I’m glad it does.