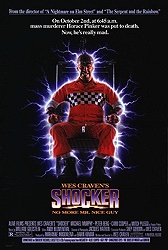 Wes Craven has been gone a few days now and I'm still trying to wrap my head around it. I'm far more deeply affected by his loss than I ever thought I might be to the point that I'm losing sleep over it. I keep thinking about that voice of his, so soft and fiercely intelligent, now silenced forever. I loved listening to him speak. If I had my way, I'd be falling asleep to his commentaries every night and it might make me feel better. But I'm not sleeping. I'm just sad. 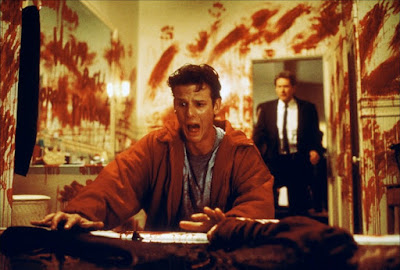 I've been rewatching some of his films to try to feel closer to this person I didn't even know but who played a huge role in my life -- one I don't think I even fully realized until I found out he was gone. And because I'm finding writing about him to be therapeutic, I hope some of you will indulge me as I revisit his 1989 film Shocker, which I've long considered to be one of his weaker efforts but which has in recent years developed a sizable cult following in part thanks to its greatest champion, Brian Collins of Birth Movies Death and formerly of A Horror Movie a Day. My good friend and regular F This Movie! guest Heather Wixson is also a big fan (but she loves Howling II, so there's no accounting for taste), and when Scream Factory recently announced that they would at long last be releasing a Blu-ray of the movie there was much rejoicing in the horror community. With Craven having now passed away, I will have no choice but to pick up the disc just so that I can hear what will now be a posthumous commentary from him. I can't imagine I'll be able to listen without breaking into tears, though it does help that he'll be talking about Shocker. I find it difficult to take the movie all that seriously.

Peter Berg plays Jonathan Parker, high school football player and hometown hero whose foster family is almost entirely wiped out by Horace Pinker (Mitch Pileggi), a TV repairman and serial killer. Jonathan tries to help the only remaining member of his family, his foster father Lt. Don Parker (Michael Murphy) catch the murderer because he saw it all happen in a dream, but their efforts only lead to more bloodshed. Eventually Pinker is caught and sent to the electric chair, but his spirit somehow escapes and affords him the ability to "jump" from person to person, continuing to wreak havoc and death on a small L.A. suburb. As Jonathan discovers the reason behind his dreams and his inexplicable connection to Pinker, those closest to him and put in more and more jeopardy as Pinker's powers continue to grow. Will the killer be stopped? No shocker there. #youseewhatIdid Here's the problem I'm facing. I do not want to speak ill of the recently deceased, especially when I and so many others are still in mourning, but I'm still not sure a lot of Shocker works for me. It's a movie that began its life at a disadvantage, born as it was out of Wes Craven's attempt to create a new horror franchise after feeling cheated out of profits from the Nightmare on Elm Street series by New Line (though the studio, to their credit, did later make some restitution). There are a lot of similarities between Shocker and the original Nightmare, from the killer who is a monster in life but gains supernatural abilities in death to the suburban locale to teen protagonist who is the only one that knows what's going on and happens to have a cop father. But there are elements of Craven's other films that bleed into Shocker, too, like the doomed teenage romance that recalls Deadly Friend and some bedroom scenes two-thirds of the way in that totally predict the ones in My Soul to Take. Throw that together with the cameos and references that Craven snuck into the movie (several members of his family show up, as does Heather Langenkamp and Bruce Wagner, with whom Craven wrote an early draft of A Nightmare on Elm Street 3: Dream Warriors) and there are sections of Shocker that feel a little bit like a "greatest hits" reel. At a time like this, that can be comforting.

The thing that I still find most frustrating about Shocker -- besides its challenging pace (it takes forever until Pinker is electrocuted and the story proper actually kicks in, and even then the movie runs just under 120 minutes) -- is that I'm not sure what Craven is really trying to say. His best movies are as much about scaring us as they are about ideas. Even most of his problematic-to-bad efforts offer some kind of political or psychological subtext. Shocker pretty much doesn't. Now, that may be me projecting my own expectations of a Wes Craven movie onto it, and it's not fair to do that if it's not what Craven is after. Maybe he really did just want to make a fun, silly horror movie with a sense of self-awareness about its own ridiculousness and a bunch of metal music. If that's the case, I guess Shocker is a success. 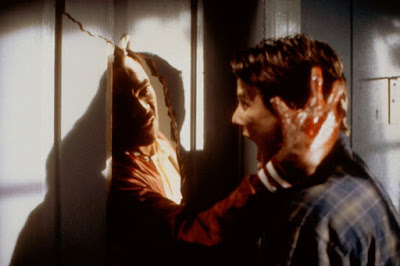 I can sometimes forget that Craven is a really playful filmmaker. Because so many of his films are so cerebral -- even political -- I tend to remember those aspects of his work and lose sight of the fact that almost every one of his movies has a good deal of comedy in it even when it maybe doesn't belong (Last House on the Left). Shocker is very much in that vein; it's not overtly comic, but I think Craven knows that he's making a "fun" horror movie. I'm not totally on board with it because I don't have much fun with it until the last 20 minutes or so, but I've at least learned not to fault the movie just because it's not the thing that I expect. I have to appreciate it for the Wes Craven movie that it is, not the Wes Craven movie I want it to be.

But outside of standing back and smiling at some of the movie's goofiness -- I mean, the theme song (from a soundtrack of all metal jams) is by a Paul Stanley side project called Dudes of Wrath -- I'm not always able to enjoy what Shocker has to offer. Even if I think I can now better understand what Craven is trying to do, I still don't think it's the best possible version of that thing. I have never warmed to Peter Berg as the Final Girl; he has some really nice moments with his girlfriend early on and is at his best when he seems a little bit sweet and dopey, but is mostly just competent and motivated by revenge. That would be ok if it seemed like he was at all upset that his family is slaughtered at the start of the film, but they might as well be strangers. In fact, his entire relationship to Michael Murphy is confusing in the early scenes, as Jonathan calls his father by his first name and treats him more like a cop he knows instead of the man who raised him. 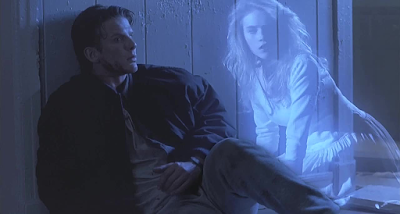 For every one thing in the movie that I like there are two that I don't. There's a scene in a lake that's creepy and haunting and even kind of beautiful, but it's the kind of scene that feels at odds with the rest of the film. There's nothing else in Shocker to support a moment like that, tonally speaking, meaning it grinds the movie to a halt despite being one of its best sequences. The violence sometimes has a nasty edge to it (Craven reportedly had to resubmit the movie a bunch of times to the MPAA, who kept on slapping with an X) but often feels generic in that late '80s/early '90s way. Again, though, that's me holding Craven to a higher standard because the violence in his previous films was so visceral and so deeply felt that it feels strange to see him so indifferent towards it here. He's not shooting the violence in a way that unsettles or provokes us. He's just chumming us.

Once Horace is taken to the chair, the movie comes alive. There's a very cool long take in which the camera moves into the execution chamber and circles all the way around it as Megadeth's cover of "No More Mr. Nice Guy" plays. The idea of Pinker jumping from body to body is kind of fun, though don't tell horror fans I said so as it's this very idea that so many of them hate in Jason Goes to Hell despite not taking issue with it here. The conceit does limit Pileggi's screen time, which is too bad as he has a lot of sweaty, overacting fun in the role. Craven's most inspired/dumbest gimmick comes late in the film when Horace Pinker "jumps" while stretched across a TV satellite, effectively beaming himself through the airwaves and onto televisions everywhere. Jonathan gives chase and the two characters run through a number of series like they're fucking John Ritter and Pam Dawber. In my younger days I assumed this was Craven thinking he was making some deep commentary about the dangers of television and the things it invites into our lives. This was because my memory of the film was that this conceit made up a much larger section of Shocker. In my head, Horace Pinker was to television as Freddy Krueger is to dreams, but that's so not the case. It's just a set piece in the movie. Did it stand out so much to me because it's the most interesting stuff in the movie? The most novel? Or the silliest? And does it matter? Is the fact that it stands out at all proof of its effectiveness? 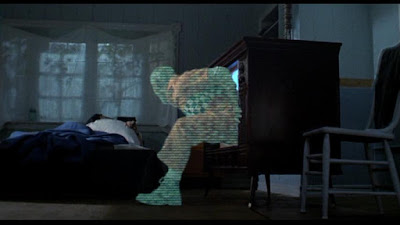 In the current climate of film discussion in which there is a real belief in objective "truths" about movies -- this one is Good, this one Bad and no dissenting opinions tolerated -- we sometimes overlook that the context of how we watch a movie has so much to do with how see perceive it. Had I revisited Shocker a month before Wes Craven unexpectedly died, I probably would have continued to find it kind of boneheaded and half-baked. While it still is those things, the circumstances of my rewatch endeared the movie to me more. Instead of imagining Wes Craven whiffing as I have so often in the past, this time I imagined him smiling, pleased with the goofiness of his efforts and just having a good time. I still think the movie is crazy overlong and uneven and I'm still not especially fond of it, but watching it this week has made me feel better in a way that I know watching one of Craven's "better" movies might not have. For all of his education and all of his brainy talk about the function of horror, Shocker is a reminder that he was also a showman who wanted nothing more than to make a commercial movie that gave us genre fans what we want.

I miss him so much.