Review: Some Kind of Hate 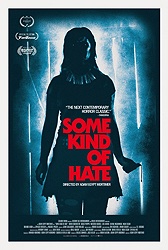 Here's an incredibly well-made horror movie that's both completely relevant to our times and the clear beginnings of a possible new slasher icon. I so want to love it more than I do.

There is so much to like in Some Kind of Hate, the feature directing debut of Adam Egypt Mortimer. For its first half hour, it's one of the best horror movies of the year: made with impressive confidence, full of striking widescreen compositions courtesy of Benji Bakshi and focusing on a unique group of characters in a way that reminded me somewhat of A Nightmare on Elm Street 3: Dream Warriors. These aren't often the protagonists of a slasher movie, and for a while Some Kind of Hate doesn't feel like most other slasher movies. Eventually that uniqueness goes away and the movie becomes another version of the thing we've seen so many times already, albeit one that's well made.

Ronen Rubenstein plays Lincoln, a teenage boy with a rough home life and an even worse situation at school, where he's constantly picked on by rich, popular bullies. One day Lincoln is pushed too far and jams a fork into one of the bullies; as a result, he's sent to the middle of the desert to attend a reform camp for troubled kids. As he grows closer to the equally troubled Kaitlin (Grace Phipps of Dark Summer), the kids at the camp start getting killed off by Moira (Disney Channel star Sierra McKormick), the vengeful spirit of a girl who was bullied and died at the camp and can be conjured up by those seeking revenge. It's like if Pumpkinhead was a cutter. 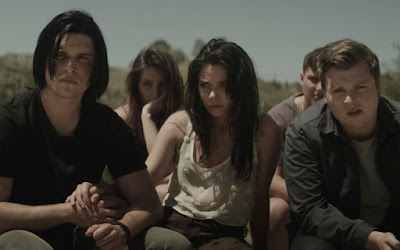 With its heavy, heavy anti-bullying themes, Some Kind of Hate is the right horror movie for our current times. It's a movie about the psychic and emotional wounds young people can inflict on one another writ physical. Its supernatural killer (I hesitate to call Moira the "villain" of the film, as she's really just a manifestation of other characters' desire to hit back) wears a necklace made of razorblades and is constantly slashing her own skin -- she's a cutter -- and the fact that she's a teenage girl gives the film a dimension not found in many contemporary horror films. Once upon a time, the teenage girl slasher was a fairly common trope (I won't mention titles for fear of spoilers) but even in those movies the character's motives weren't usually tied in directly to the female adolescent experience. The idea of Moira gives Some Kind of Hate novelty, but also some depth.

It's frustrating, then, to see the movie eventually devolve into a mess of confused motivations and repetitive scenes of Moira attacking; one of the tropes of the slasher movie is that the killer usually mixes up the way he or she dispatches victims, but with Moira it's always the same -- she cuts herself somewhere and the same wound is suffered by her target. The setup and payoff is always the same, and for a movie that wants to inflict some revenge on bullies who "deserve" it, there's a point at which people just start dying whether they're innocent or not. I get it -- Moira is a monster, even if she is righteously just at points -- but because the language of the film treats all of the deaths the same, there is no emotional difference between those that have it coming and those who are truly innocent victims. What starts out so strong gradually loses its way. 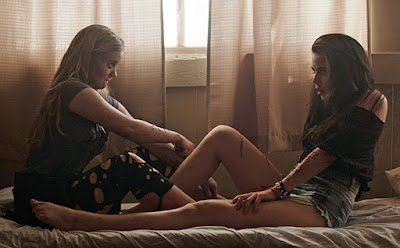 The cast is uniformly good. Ronen Rubenstein, an actor with whom I was previously unfamiliar, ends up hiding a little behind his character's own brooding but is so strikingly handsome and charismatic that he comes off like a born movie star. This is also the largest role I've seen Grace Phipps play to date -- I am unfamiliar with her Disney Channel stuff -- and she does a convincing turn as a girl who's basically a good person but for whom one might be willing to make some bad decisions (her costume designer also deserves special mention and/or praise). The supporting cast includes Spencer Breslin, The Wire's Maestro Harrell, Noah Segan and writer/director Michael Polish as the camp's leader. Even Josh Ethier (editor and sometimes actor of Almost Human fame) pops up for a cameo -- a little reward for those of us who follow indie horror. This is a group of people with whom I'm happy to spend time in a movie. 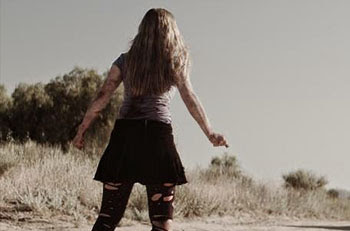 So what is it that's holding me back from embracing the movie all the way? I know it's the type of genre film that's going to click with a lot of people and I wish it would have clicked that way with me. There's nothing wrong with Some Kind of Hate that isn't wrong with ninety percent of all horror movies: it's repetitive, the characters don't always make sense, etc. My frustration with the movie is because there are so many things right with it that I bummed out when it fell short of living up to its early potential. So many horror films are disposable; they can easily be forgotten or downright ignored. Some Kind of Hate is the kind of movie that's good enough for me to want it to be better.