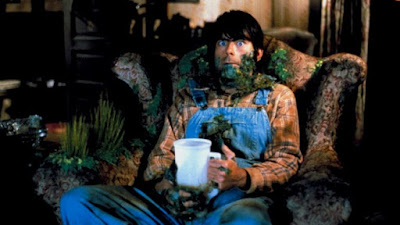 My favorite food is pizza and my favorite writer is Stephen King.

I'm sure there some for whom either (or both) of these opinions will discredit me. I am ok with this. I understand Stephen King's place in pop culture. He writes a lot of books, sometimes two a year. He uses corny turns of phrases and often relies on the same tropes. His endings are often disproportionately disappointing in comparison to what has come before. In spite of this, there is no other author whose work I enjoy reading more and to whose next book I look more forward. Yes, he's written some clunkers. But I'm happy to grant the guy who wrote Dreamcatcher some leeway because he's the same guy who wrote The Stand. M-O-O-N spells I love that book.

Stephen King movies are often a different story. The common wisdom seems to be that all of the movies made from his books are terrible, but this is lazy and ignorant thinking that comes as a result of people just repeating said common wisdom without thinking much about it. It's true that I like more Stephen King movies than most people might, but that doesn't change the fact that there are a least a half dozen adaptations (probably more) of his work that are legitimately terrific. Many of those will be represented in this lineup. Some of them aren't because I had to make room for The Mangler. I gotta do me.

And yes, I probably should have saved this list for #ScaryMovieMonth, but I've been tearing through Stephen King books lately (or, as my 6-year old calls him, "Step-hen King") and wanted to write this up. What can I say? I was in a mood. 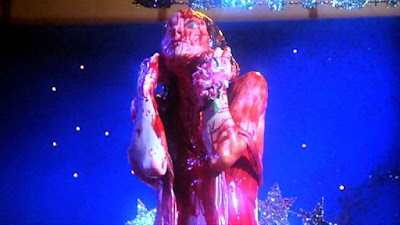 With over 100 movies and TV shows adapted from the writing of Stephen King, it makes sense to start with the first -- both the first novel King published and the first film to be adapted from his work. I know there are some people who feel Carrie has dated badly because of the haircuts and the clothes and the music and the soft focus, but I find it to only get better with age. Not only are its themes more relevant than ever (something even the 2013 remake failed to capitalize on), but De Palma's energy and stylistic flourishes feel just as contemporary in a cultural space filled with directors influenced by him. I like this movie more every time I see it. We're off to a good start. 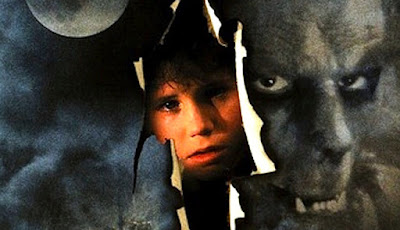 Normally I would wait to the overnight section of these 24-hour marathons to start programming the more idiosyncratic, "just for me" picks. But like Carrie, Silver Bullet does a great job of melding the more humanistic, character-driven side of King's writing with the supernatural stuff -- it's just that Carrie gets credit for doing it and Silver Bullet doesn't. I'm a big, big fan of this underrated werewolf movie (despite the appearance of one of the all-time worst screen werewolves) and love the way it blends early '60s-style nostalgia -- shades of To Kill a Mockingbird (I swear!) -- with stupid '80s gore.  Corey Haim and especially Gary Busey are great. I'm happy with its placement here. 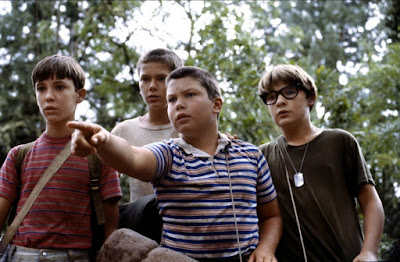 Of the handful of non-horror Stephen King adaptations to make it to the screen, Stand By Me was the first and still one of the best. It's a comedy, it's a drama, it's a coming of age story in which the characters talk more like Stephen King characters than in most other adaptations. Plus it's proof that the kinds of diversions in which King so often indulges -- stuff like the "Lard Ass" story -- can sometimes be iffy on the page and even more so on screen. Slotting this any later than third would make it stick out too much, but this side of both his work and his filmography ought to be represented. 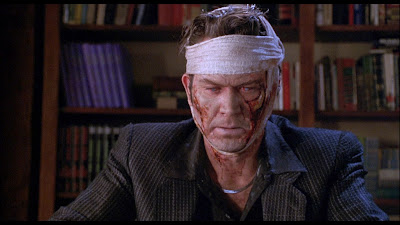 Here's a Stephen King adaptation that usually gets lumped into the "bad" column but which I think is pretty underrated. It's flawed in part because Romero was tasked with visualizing some things that work much better in a novel (the sparrows, the sparrows) and in part because it was a difficult movie to make -- not everyone got along and it got caught up in the collapse of Orion, shelved for a few years before getting dumped with little attention. I was hoping Scream Factory's Blu-ray from last year would help audiences rediscover the movie, which has great atmosphere and some really interesting stuff from Timothy Hutton, but that hasn't happen. I do wish that Ed Harris had been able to reprise his role as Sheriff Pangborn from Needful Things (in reverse, I guess, since this one was short first), because I sometimes struggle with buying Michael Rooker as a decent, sympathetic human being. It's the kind of subdued horror film that would work well in this spot, especially as we rev up right after this. 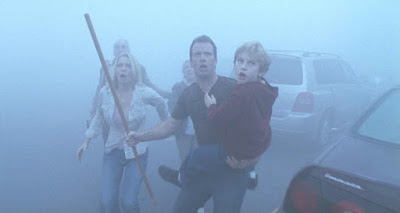 Probably the last great Stephen King movie (or at least the most recent one), adapted from a novella by a filmmaker who in some ways owes his career to King; of the four features Frank Darabont has written and directed, three of them have been Stephen King adaptations. This is a really cool monster movie and a scathing social commentary; like Romero's original Night of the Living Dead, it's a movie about (as JB has pointed out) how terrible people can be to one another when the shit goes down. The movie plays even better in Darabont's preferred black & white, maybe because it looks even more like NotLD? The famously bleak ending doesn't come from King's story, but the writer has publicly said he likes it better than his own. I still don't know exactly how I feel about it. What I do know is that I have to program this thing early on or else risk becoming irrevocably depressed. 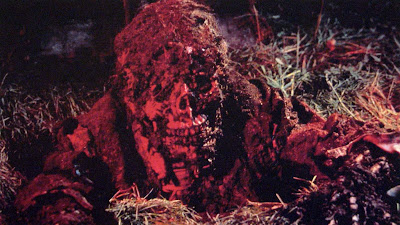 After the insane downer that is The Mist, we need to pick things up and have some fun again. No King adaptation is more fun than Creepshow, still my favorite horror anthology of all time and a better tribute to EC Comics than even Tales from the Crypt. Though I'm not the world's biggest fan of "The Lonesome Death of Jordy Verrill" -- Stephen King's sole outing as a leading man -- it's never enough to sour me on the film as a whole, which delivers great segment after great segment with a mix of dark comedy, wonderful creature effects and twisted morality. It's just so goddamn entertaining. 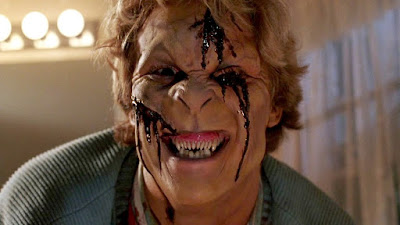 As nighttime begins to set it, my tradition is to always let the movies get weirder and sillier. Sleepwalkers is both. The film marks the first pairing of King with frequent collaborator Mick Garris, directing King's first original screenplay not based on one of his own works. It's a crazy, over-the-top movie, filled with giant cat people and incest and at least one person getting stabbed with a cob of corn. Largely misunderstood on its release (the '90s were a weird time for horror), Sleepwalkers has aged quite well and is now one of the decade's more underrated entries. It's a blast. 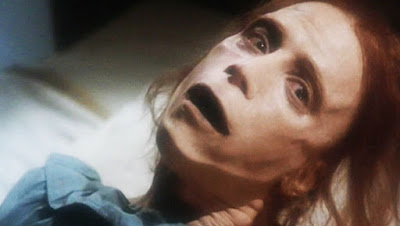 Well, we have to get to it sooner or later. I go back and forth on this movie, which I sometimes find grisly and nasty in a really effective way and sometimes manipulative and off-putting and trashy. All of this indicates that the movie is pushing buttons and leaving me unsettled, which means it works even if I sometimes get mad at it for working. Few films capture the ugliness of which King is capable better than this one, and Fred Gwynne's Maine accent is heavy enough to represent every King story set there, which is most of them. Plus it has Zelda, still the scariest thing anyone has ever put in a movie ever. 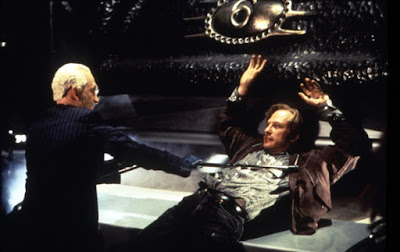 Like I said, nighttime is when I like to get weird. There are few King movies weirder than this Tobe Hooper adaptation of a King short story about a possessed laundry press. Coming as it does a few years past Hooper's most creatively fertile period, I won't make the case that this is one of his best films, but it's much more in keeping with the kind of outrageous movies he made so many of and for which he rarely gets credit. Plus one of the things I tried to do with this marathon is program a lot of the King movies directed by the heavy-hitters: Romero, Cronenberg, De Palma, Darabont, Kubrick (I left out Carpenter because I think Christine only works early on and I had other stuff I wanted to watch more). There are very few -- if any -- authors whose work has been directed by so many masterful and iconic filmmakers. No way I was leaving my boy Tobe off that list. 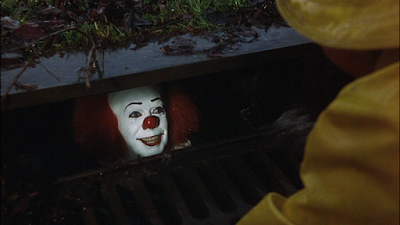 I struggled with this one a lot, mostly because of its length (I could program two more movies into the time slot it takes to watch just this one). But because television has been such a huge source of King adaptations and because this is one of the very best ones, it seemed appropriate to put it here. The first half is infinitely better than the second (it originally aired in two parts, split between childhood and adulthood), but there's so much to like throughout that I can overlook some of the rough spots...like the spider monster revealed at the end, which King himself accused of looking like an enormous Duracell battery. I put it this late on purpose thinking that, should one begin drifting in and out of sleep, this is the time to do it. I can't imagine anything scarier than waking up to Tim Curry's Pennywise -- still one of the best Stephen King monsters ever put to screen -- yelling about how they all float down here. THEY ALLLLLL FLOOOOOOAT. 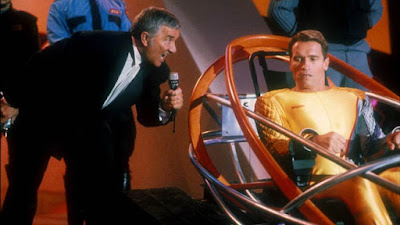 Almost everything I programmed into this marathon falls under the category of horror, and while there are several good Stephen King dramas there weren't many I felt like watching under these conditions (though Dolores Claiborne came very close). Here's a loosely adapted -- VERY loosely -- film from a story King wrote under the name Richard Bachman. It's pure '80s action movie nonsense: loud, garish, violent and stupid. Naturally, I love it. This is the perfect movie to revive yourself before going into the home stretch. It's also maybe the last fun to be had, as the next two movies are going to be pretty heavy stuff. Remember: there's nothing funny about a dickless moron with a battery up his ass. 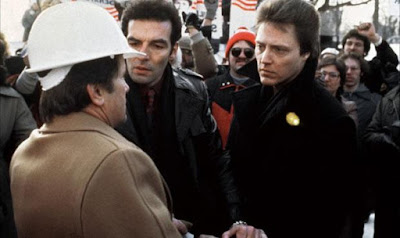 This is a really interesting film in that it's one of the best King adaptations, but also one of the most somber. It's the David Cronenberg movie that feels least like a Cronenberg movie. Though it has elements of the supernatural, it's really more a character drama and a tragic one at that. There's something about the greyness of the sky that has always stuck with me, and Christopher Walken gives one of his best -- and certainly warmest -- performances. It will be a great comedown after a nighttime of goofiness and a reminder of just how strong a number of the late '70s/early '80s King adaptations were. 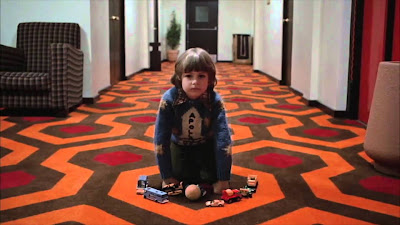 Yes, this will take us well beyond the 24-hour mark and closer to 27. But c'mon. It's The Shining. It's one of the greatest horror movies ever made. Really, though, it just seems crazy to talk about programming a marathon of Stephen King movies and not include what is arguably the greatest one -- ironic, since it's famously the one with which King himself was so vocally displeased. What better way to watch The Shining than when you're feeling cooped up in the same place for way too long, starting to think you're never going to leave? Maybe you never left. Maybe you've always been here.
Posted by Patrick Bromley at 12:00 PM