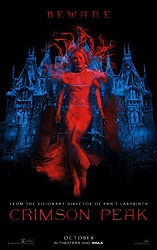 This is an impossibly gorgeous movie that I want to live in. Except for all the ghosts and murder.

I have a strange relationship with Guillermo del Toro. I think he's a great filmmaker and I'm so thankful that he is making movies, particularly because he mixes smaller personal films (Cronos, The Devil's Backbone) with big blockbusters (Pacific Rim, the Hellboy films), both of which feel like an extension of who he is. He's a true visionary, and there should be more filmmakers with as much imagination, passion and vision making films as he does on a massive scale. I love del Toro the person even more than del Toro the filmmaker. He loves all the things I love with all his heart and he lives to put that love back on the screen. We are lucky to have him.

Having said that, it's rare that I fully fall in love with any of his movies -- I appreciate so many things about them but rarely lose myself in them. He's never made something that I have disliked, but only Pan's Labyrinth and Blade II really connect with me. Well, add Crimson Peak to that list. I loved it. 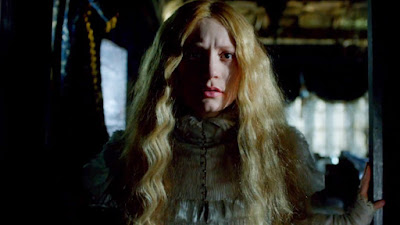 Mia Wasikowska stars as Edith Cushing, a young woman living in 19th century New York. She's the daughter of a wealthy industrialist but wants to carve out her own place -- unlike the girls around her, Edith has no desire to marry a wealthy man but instead has dreams of being a successful writer. Into her life comes Sir Thomas Sharpe (Thomas Hiddleston), an English aristocrat seeking an investment from Edith's father (a delightful Jim Beaver). Her father dislikes Sharpe immediately, but Edith finds herself falling in love with him against her better judgment. She eventually returns to his crumbling family estate Allerdale Hall -- sometimes referred to as "Crimson Peak" because of the red clay that seeps through the soil and snow -- where she lives with Sharpe and his icy sister Lady Lucille (Jessica Chastain). The house is old and full of ghosts, and as Edith investigates the estate she begins to uncover the dark and terrifying secrets of Crimson Peak.

A big deal has been made of the fact that Crimson Peak is not a horror movie; del Toro has been saying as much on his press tour and even has Edith say early in the film that "This is not a ghost story; it's a story with ghosts in it." By my standards, it is still a horror movie -- it has ghosts and murder and a great big spooky house. It is a film positively overflowing with gothic atmosphere, born of a love for Edgar Allan Poe and Hammer and Mario Bava. Crimson Peak is celebration of a specific kind of '60s horror, and del Toro recreates the period perfectly and with the utmost care and respect. I could go on and on about how exquisitely gorgeous the movie is, from the production design by Thomas Sanders to the costumes by Kate Hawley to Brandt Gordon's art direction to Dan Lausten's photography -- everyone involved with the film does incredible work, and I can't think of another movie this year with visuals with which I've fallen more in love. The atmosphere is perfect, so much so that I didn't want the movie to end. 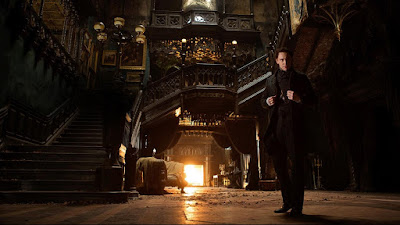 The narrative is less expertly realized than what's in front of the camera. The screenplay, by del Toro and sometimes collaborator Matthew Robbins (who, once upon a time, directed Dragonslayer), offers little in the way of surprise or originality. The dialogue can be clumsy and on the nose at times. None of that matters. Crimson Peak works exactly as it is supposed to work -- it is a feverishly heightened romance and, like all good ghost stories (or stories with ghosts in them) a film about the sins of the past returning. Wasikowska is as ethereal as ever but no mere damsel in distress; her Edith is a woman of intelligence and agency, and when she is swept up in romance it is in spite of herself and not the fulfillment of any girlish fantasies. Hiddleston continues to impress with his every performance, striking just the right balance of charming sincerity and deceptive con man, while Chastain gets to have the most fun as the potentially unhinged Lady Lucille. The film is engaging during the early New York stuff (in large part because of Jim Beaver), but once it gets to England and puts the three actors inside that incredible house it's able to fully become what it's meant to be. 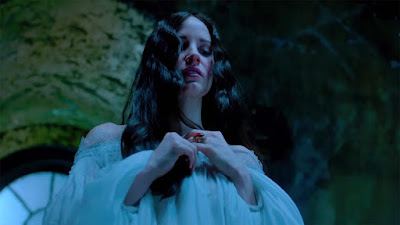 Crimson Peak has already proven polarizing. There are those who object to its preference for gothic romance over full-blooded horror and others who seem unable to forgive the narrative shortcomings in spite of the visuals on display. I cannot argue with any of these people, as we can only respond to the film in a way that's honest for ourselves. The same goes for me, and I honestly love the film. Do I think that Crimson Peak has its problems? Sure. Charlie Hunnam gives yet another weak performance and the scariest moments are undermined by the usual CGI "ink blot" ghosts, digitally created apparitions with wispy black tendrils floating off of their spectral bodies. Do I care? No. I'm too deep in love with the look and feel of the film, so painstakingly and lovingly created by del Toro and his team. His films are so often about his love of fairly tales and the fantastic, but also about his love of film, perhaps none more than Crimson Peak. I want to watch this movie again and again. It's one of my favorites of the year.
Posted by Patrick Bromley at 5:00 AM