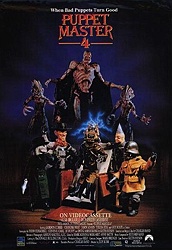 1993's Puppet Master 4 marks a turning point in Full Moon's long-running Puppet Master franchise, the series that essentially built the company. Like in the Saw series of the 2000s, the first three Puppet Master films make up their own trilogy of sorts. There's not a ton of continuity to them, but they at least feel like they're of a piece and are typically the only ones cited when fans list off their favorite entry in the franchise.  Like the Saw series, the franchise probably could have ended after the third movie, but fan demand kept it going movie after movie. And like the Saw series, the fourth film sees a real shift in the approach to the mythology; whereas Saw IV introduced Detective Hoffman and sent the sequels down a new path, Puppet Master 4 introduces the underworld and demons and magical creatures called Totems to serve as antagonists, turning the once-murderous puppets into the heroes. 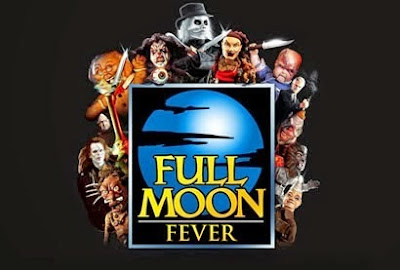 The movie opens in Hell, where a demon named Suktekh commands a totem to Earth so that it will find and kill anyone in possession of André Toulon's secrets of animation. After it kills two scientists and steals their souls, more totems are sent off after a group of researchers at the Bodega Bay (the old hotel first seen in the original Puppet Master) who have discovered Toulon's puppets and animated them with his formula. The first thing they do after uncovering the secrets of artificial life? Play laser tag with the puppets. The second thing they do? DIE.

That's an overstatement, because (SPOILER) only one of the four main characters in the movie actually dies, and he's the asshole character only interested in Toulon's magic for his own personal gain. Gone is the slasher movie structure of the first two Puppet Master films, and in its place is...well, I'm not really sure. Half the less-than 80-minute running time passes before the puppets come to life. And when they finally do, they play laser tag. The majority of the first half consists of characters standing around in rooms talking, which makes this sound like a more recent Full Moon effort despite it having been made under the original Paramount deal and thus given a slightly larger budget. 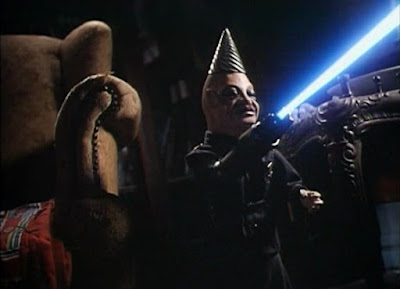 When the killer totems finally do attack, they don't do anything cool like drill holes into heads or vomit up leeches to drain the blood from their victims. They just kind of bite and claw in a way that's not terribly threatening. There's not much to distinguish their assault from one in Gremlins, except in Gremlins the monsters were higher in number and the scenes were mostly played for more for laughs than horror.

The real charm of Puppet Master 4 is seeing the puppets become the heroes, in much the same way that Terminator 2 turned the T-800 into the good guy because the filmmakers knew that's who the audience had come to see. The best scene in the movie finds the formerly evil Blade and Pinhead grabbing hold of a totem and pinning him to the wall so Tunneler can drill a hole in his stomach, followed by a wonderful shot of Pinhead cleaning the blood off Tunneler's drill with a paper towel. It's a moment that makes them simultaneously murderous and charmingly adorable. Another sequence finds them dispatching a totem in roughly the same way that Doc Brown sends the DeLorean back to 1985. It involves setting up wires and climbing onto the roof of the hotel and waiting for some well-timed lightning and it makes one wonder why five puppets went to all that trouble when it was a lot easier just to drill the thing through the stomach. Maybe they just like a challenge. 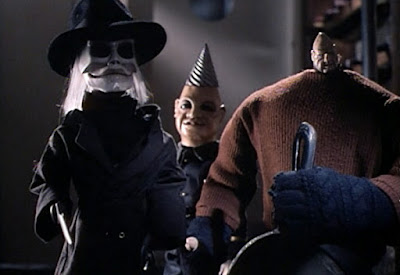 The movie is the first in the series to be directed by talented genre filmmaker Jeff Burr, who would also direct Puppet Master 5 the following year (which is really just the second half of this movie, as it ends -- or rather just stops -- on something of a cliffhanger). Burr, whose credits also include From a Whisper to a Scream, Stepfather 2, Leatherface: The Texas Chainsaw Massacre Part 3, Pumpkinhead II: Blood Wings (he's clearly the guy you hired to make a horror sequel in the early '90s) and Night of the Scarecrow, is a director who elevates possibly substandard material by never talking down to it -- whatever he's making, he embraces the movie that it's supposed to be. I wish his photography were a little more shadowy; this movie, like Pumpkinhead II and Night of the Scarecrow, suffer from being too clean and brightly lit in that very '90s way and lacks some of the moodiness of the previous entries. Not that Puppet Master 4 is lacking for style, though. It just doesn't have a consistent style at all. It seems like Burr tries to keep the movie alive by doing something different with the camera in every scene. Sometimes he plays things out in slow motion, sometimes he jerks the camera around, sometimes he tilts it, sometimes he has characters talk directly into it like it's a Jonathan Demme movie. There's rarely a motivation for any of this choices other than to try to keep it interesting, either for the viewer or for himself.

But like I said, Burr's a good director who knows how to stretch a budget and he does solid work with Puppet Master 4. It was originally meant to be the first theatrical Full Moon film with Charles Band attached to direct, but when it got busted down to DTV status Burr was brought on because he's a guy who knows how to work fast and work cheap while still turning out a good movie. He does his best to keep things energetic and makes sense of a script that had been passed through a lot of hands as well as cut in half to be turned into two movies. Dave Allen was still providing stop motion animation for the series at this point, but there's not a whole lot of it in the film; more often than not, the puppets are shot from the waist up. They move around quite a bit (unlike later entries), but some of the charm of those first films is gone. 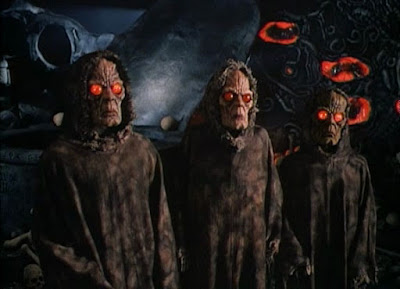 For a long time, the first three films were the only ones available on Blu-ray, not counting the more recent Puppet Master: Axis of Evil and Puppet Master X: Axis Rising, the ninth and tenth entries. That's no longer the case, as Full Moon has now released Puppet Master 4 in high def and already announced plans for Puppet Master 5 in the coming months. Unlike some of Full Moon's early forays into HD, Puppet Master 4 looks pretty terrific on Blu-ray. For one, it's finally presented in its original 1.85:1 widescreen aspect ratio after only being available in 4:3 for years on VHS and full screen DVD. It's bright and colorful and clean, not suffering from visible wear or softness. The disc also comes with a couple of bonus features, including Full Moon trailers (standard for their releases), the original Videozone piece that accompanied the VHS release and, best of all, a commentary with Jeff Burr, who always gives great, totally honest talks about the movies he's directed. His track on this disc is no different.

While far from being a traditionally "good" film, Puppet Master 4 is a decent little B-movie that knows just what it is and has some fun by mixing up the status quo of the series. It's probably still my fourth favorite of the franchise, but the quality of the movies hadn't yet fallen off the cliff. Much of its success can be attributed to Jeff Burr, a director talented enough to make even the fourth and fifth Puppet Master movies work. Pity that Full Moon wasn't able to use him more often.