The Overlook: Cracking Up

I believe that I have just seen the worst movie ever made.

Cracking Up is the last feature film (so far) written and directed by Jerry Lewis. Cracking Up was completed in 1982; after a disastrous preview screening in Kansas City, it was only released theatrically overseas under its original title, Smorgasboard. Cracking Up is 89 minutes of my life that I will never get back. Cracking Up is an interminable parade of barely connected scenes. By my count, there are 22 “skits and bits.” Here's what we get (all timings approximate):

1 Jerry tries to kill himself in various unfunny ways. Suicide, we are reminded, is an excellent way to begin a comedy. 4m.

2 Jerry visits a psychiatrist and slips on his highly polished floor. 5m.

3 Jerry and the psychiatrist (Herb Edelman) cannot decide on which chair Jerry should sit. 6m.

4 Jerry has an unfunny flashback in which he recalls crossing the street with another sixty year-old actor dressed as a child. They keep dropping things. 5 min.

6 Jerry remembers an ancestor (also played by Jerry) in 15th century France. This sequence is colorful, but half the long shots look out of focus. Much of the sequence involves Jerry speaking gibberish that is supposed to be French. At one point the phrase "Oui, Oui" refers to urine. 3 min. 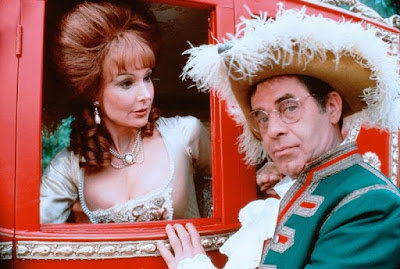 7 Jerry the comic Frenchman is put in jail. Now he simply speaks English with an outrageous French accent. He tries to escape and fails. 5 min.

8 Jerry thinks back to his father, the orchestra conductor (also played by Jerry) for 3 minutes of orchestral hi-jinks that feels more like 20 minutes.

9 Jerry witnesses a bank robbery. The head crook (also played by Jerry) notices the bank's security cameras. The criminals become obsessed with the security cameras and perform an elaborate dance routine in front of them. The police arrive and join the dance. 7 min.

12 Jerry wears swim flippers on his feet, so he will no longer slip on the psychiatrist's highly polished floor. Jerry places two cigarettes in his mouth and imitates a walrus. 5 min.

13 Jerry hits his head on a wall sculpture that makes noise. 2 min.

14 Jerry has trouble taking a ticket from a parking garage kiosk. 1 min.

15 Jerry goes to the airport and has unfunny problems with the ticket agent, security, and the other passengers. Foster Brooks shows up, doing his “funny drunk” character from the 1970s. 7 min.

16 Jerry ends up in a hospital and has unfunny surgery. 3 min.

19 Jerry has car trouble; an unfunny Southern sheriff (also played by Jerry) arrests a man who is morbidly obese. 5 min.

20 Jerry is a chauffeur in a segment that also includes Sammy Davis, Jr., who seems to be wearing his costume from The Cannonball Run. I guess they let him keep his wardrobe. 5 min.

22 Jerry tries to kill himself again. Unfunny out takes over the end credits hint at deleted sequences; apparently, the Butkus segment was originally a lot longer. I can only imagine this is to leave us with a sense of profound gratitude that the movie was not as long as it could have been. 3 min. 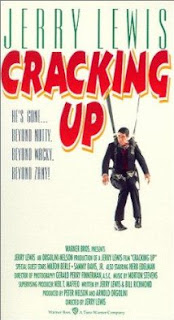 I originally intended to mark a few of the dumbest bits with an asterisk leading to a footnote, reading, “I am not making this up.” But so many of these premises are so thin, pointless, or otherwise unbelievable as comedy bits that I was getting too many asterisks. So, as a blanket statement, I assure you I did not make ANY of this up. These are the actual bits that were actually conceived, written, budgeted, rehearsed, filmed, edited, scored, and printed. People worked on this film—people for whom this was their job. They would go home to their families after having spent time and effort on this. They would tell people at parties “I’m working on the latest Jerry Lewis film” and inside, they would die a little. Someone missed their fifth-grader’s clarinet recital for this cinematic turd and that, babies, is a tragedy. 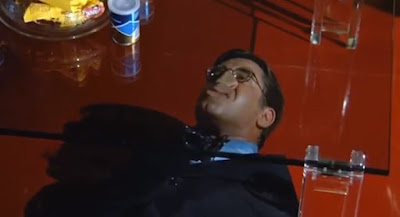 Jerry Lewis was one of the originators of paid product placements. Portions of the film seem like commercials for Sony televisions, M&M’s candies, United Airlines, and Ford automobiles. I can’t imagine that any of these fine companies felt that they got their money’s worth from the deal. In the film, Jerry shoots holes in the television with a gun, has a hard time opening the candy bag, refuses to fly United, and blows up the car. Could Jerry have secretly enjoyed biting the various corporate hands that fed him? Could these segments have actually been sponsored by LG, Reese’s Pieces, Delta, and Chevy?

Babies, I am not merely some Jerry Lewis hater who is looking to just pile on. I like several of his films and regard my first reading of his book, The Total Filmmaker, to be a seminal moment in my film education. I WAS ACTUALLY HOPING THIS WOULD BE GOOD. 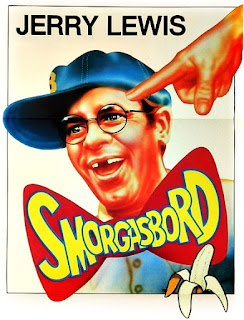 But believe me, the above synopsis is charitable. Cracking Up is not just a mess; it defines “mess.” It is devoid of entertainment value—it is even hard to look at. The lighting is ugly, harsh, and flat, casting huge shadows on the back walls of the sets. Some of the shots are out of focus, as is the lead performance by Jerry Lewis. The camera work, often a highlight in Lewis films, is erratic and sometimes looks handheld, as if the camera operators were simply told, "No matter what occurs, keep it on JERRY!" The pace is lethargic, and the timing is so off that it seems as if we were watching a rehearsal instead of a finished performance. At times, Lewis's famous comic timing is so demented, we wonder if he is actually underwater or under the influence of drugs… or both.

Cracking Up stands as the nadir of all art: pointless, self-absorbed, annoying, shallow, poorly made, and at times offensive. It serves to make all of the hundreds of bad movies I have seen in my life seem just a little bit better. And that, babies? That’s an achievement.