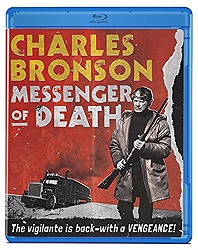 A double dose of Bronson's Cannon period now on Blu-ray from Olive Films!

Once the leading man's man of respectable Hollywood movies like The Dirty Dozen, The Battle of the Bulge, Hard Times and Once Upon a Time in the West, human mustache Charles Bronson had either fallen on hard times by the '80s or else just didn't give a shit anymore and was more than happy to cash a paycheck for learning a few brief lines of dialogue and shooting people in the face through his trademark grimace. This was the period in which he made a boatload of movies for Cannon Films, who were chasing box office and legitimacy by signing stars like Bronson and Chuck Norris and then getting them to star in some of the worst movies of their respective careers. Bronson made four Death Wish sequels at Cannon (the best, of course, being Death Wish 3 [RIP The Giggler]), first for director Michael Winner and then for J. Lee Thompson, his two most frequent collaborators in the '80s, plus a bunch of other violent trash like 10 to Midnight and Murphy's Law.

It should come as no surprise that this is my favorite period for Charles Bronson.

It has very little to do with Bronson himself, whose appeal as a movie star has often eluded me. My affection for '80s Bronson has everything to do with his willingness to appear in totally sleazy garbage at a time when his action movie contemporaries were on top of the mainstream box office. As a lover of Cannon's particular brand of junk, the movies he made during this decade are a full dose of delirious garbage mainlined directly into my head heart. 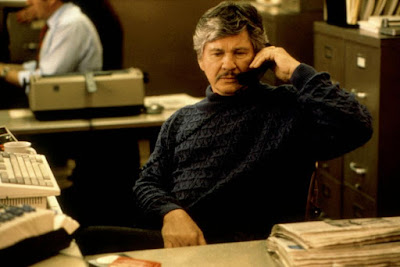 Well, most of them. 1988's Messenger of Death, the first of two Bronson Cannon films recently released to Blu-ray courtesy of Olive Films, is a disappointingly straightforward affair. Though the tagline for the film reads "The vigilante is back...with a vengeance!" (which in and of itself is hilarious and redundant, like saying "The pizza man is back...with PIZZA!"), Bronson isn't playing his usual pissed off, bloodthirsty, revenge-seeking geriatric. I mean, it opens promisingly enough with the senseless and violent slaughter of a bunch of innocent women and children (did I mention this is a Cannon movie?). But from there, it settles into a land dispute between Mormons and the shady dealings of the water company (forget it, Charles Bronson, it's Chinatown) with Bronson playing a reporter who stands to the side and watches two sides fight.

That's pretty much it. There's little of the lunacy that director J. Lee Thompson would bring to several of his other Cannon efforts, nor the spirit of facism found at the core of Bronson's '80s action movies. I can't even remember if he shoots anyone (and if he does, it's in self defense -- we're a long, long way from Paul Kersey). The mystery isn't one worth solving, the answers utterly predictable, the action mostly relegated to conversations and interviews. Maybe this was Thompson and Bronson chasing some respectability after years of trash. Or maybe they were trying to make trash -- the opening suggests as much -- and just came up short. Don't worry, boys. It's like riding a bike. 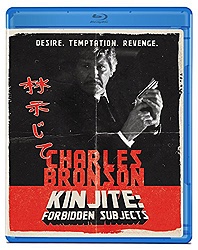 Just one year later, Thompson and Bronson came roaring back with their final collaboration, a film so bonkers sleazy that it's like they set out to overcompensate for the lack of seediness in Messenger of Death and even still might have gone to far. The resulting film, Kinjite: Forbidden Subjects, is one of their very worst/best efforts.

According to Wikipedia, the word "kinjite" translates in English to "forbidden hand," which means the actual title of this movie is Forbidden Hand: Forbidden Subjects. Right off the bat you know you're in good hands. Bronson is back playing a cop (PHEW) searching for the daughter of a Japanese businessman after she is kidnapped by bad guys running a child prostitution ring. Oh, and the same businessman is into groping women on the subway -- including Bronson's underage daughter. Oh, and Bronson's character doesn't like Japanese people. Between that last character detail and the whole "looking for kidnapped girl" plot, you just know that Thompson and Bronson thought they were making their The Searchers. At the very best, this is their Black Rain.

Kinjite opens with Nicole Eggert, then the pretty young star of Charles in Charge, stripped down to her underwear playing a teen prostitute. No one is burying the lede here. This is a racist, misogynist, xenophobic, paranoid thriller -- the kind that pretends to know what's "really going on" in the mean streets of America but which presents only the worst possible version of crime in the '80s. This was Cannon's bread and butter; I often wonder if it's because Menahem Golan and Yoram Globus immigrated here and, as such, had a "heightened" perspective of the dangers present in America. 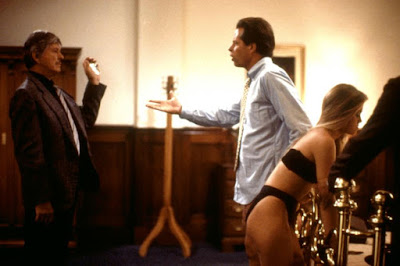 This is the rapiest of all Bronson's Cannon films, which is saying something given that the entire Death Wish franchise is contingent on sexual assault, with both Death Wish 2 and 3 featuring graphic onscreen rape (especially 2...ugh, Death Wish 2). While there isn't as much rape occurring on camera here, it's at the center of every interaction and plot thread, from the initial subway groping observed by the businessman to the fate of his daughter to Bronson's own obsessive paranoia about his daughter's sexuality to the last shot of the film, which seems to suggest that lots of prison rape is the ultimate justice. The movie's focus on sex and sexuality and Thompson's total inability to address any of it in a way that feels mature or socially responsible makes Kinjite one of the sleaziest of the Bronson joints, and that's saying something. I'd probably put it right behind 10 to Midnight.

Cannon's library continues to be divided up among a number of distributors, with some titles (like these) going to Olive Films while others go to Kino, some to MGM/Fox, some go to Scream Factory/Shout! Factory and even a few going to Twilight Time. I'm happy they're being released in HD at all. While Olive has released Messenger of Death and Kinjite: Forbidden Subjects without any bonus features aside from a trailer for each, the picture and sound quality on both discs is perfectly in keeping with other recent releases of catalogue titles. Bronson completists will want to pick up both discs, while Cannon die hards can sleep at night adding only Kinjite to their libraries. It's the rare case in which the more off-putting movie is the one I prefer...which probably says more about me than it does about the quality of either one.