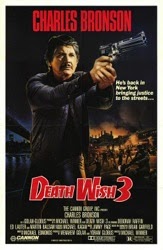 There are certain movies I always assumed would never be written about at F This Movie!. Back to the Future is one. Saving Private Ryan. Another is 1985's Death Wish 3, a movie that has been talked up so much around these parts that it has become its own kind of meme. But today we celebrate Cannon Films as part of Junesploitation, and there may be no more entertaining entry in the Cannon filmography (aren't you glad I didn't say Cannon canon? I should not be alive) than this one. It's time to put a face to the legend. Death Wish 3 deserves the #HeavyAction treatment.

There is a reason Death Wish 3 has been so widely embraced by several of us in the FTM community, and that is because it is one of the most singularly bonkers and entertaining action movies ever made. It is the Sleepaway Camp of action movies (the twist is that Charles Bronson has a penis) in that it creates a world that pretends to be ours, only much crazier and uglier and filled with people who are mean. In a genre defined by sameness, it is an action movie unlike any other -- for better or for worse. I would argue "better." 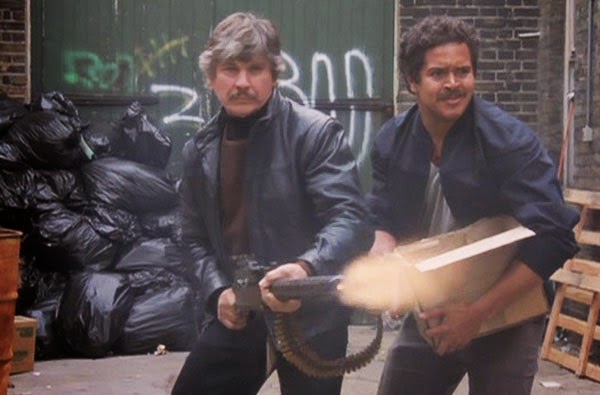 It's been a few years since the events of Death Wish 2, in which architect-turned-vigilante Paul Kersey (Charles Bronson) has the rest of his family killed by an L.A. street gang (this is after his wife was raped and murdered in the original Death Wish). Despite being barred from the city for his rampage of revenge in the first film, Kersey returns to Brooklyn to visit his old army buddy Charley (Francis Drake). He gets there just in time to see Charley murdered by a gang, a crime for which he is mistakenly arrested and forced to spend the night in jail. There, he gets into a fight with the gang's leader Fraker (Gavan O'Herlihy) with whom he's sharing a cell. Fraker decides to he's going to kill Kersey. No one pushes him around a few times in the confines of a jail cell and lives to tell the tale of that very specific incident.

Kersey is released and given a deal by Lt. Shriker (the late, great Ed Lauter): he is allowed to kill as many gang members as he wants as long as he gives the cops a heads up so they can take credit for any busts. THIS IS THE PLOT OF A MOVIE. So Paul moves into Charley's apartment, which is in a building full of elderly people that are being robbed and bullied by the gang. Kersey decides that enough is enough and begins to fight back, enlisting the help of senior citizen Bennet Cross (Martin Balsam), a WWII vet and former friend of Charley.

The rest of the movie follows Kersey as he taunts and murders gang members, then teaches the senior citizens of the apartment complex how to defend themselves by setting Home Alone-style booby traps and teaching them how to fire guns and also murder gang members. The final 20 minutes are pure anarchic violence as the residents of the building stage a bloody fight to the death against the gang. 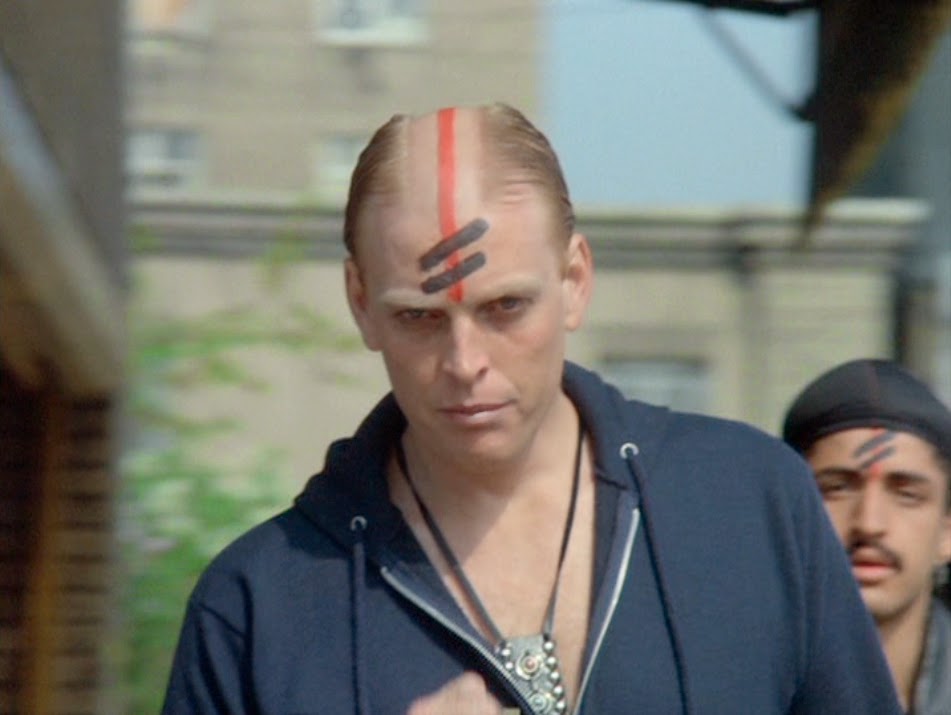 There is very little about the plot of Death Wish 3 that gives much indication of just how nutty it is, save maybe for the part about the old people fighting back against the gang (including one booby trap in which a spike board pops up and slams one intruder in the face, yanking out his front teeth in the process). The nuttiness is in the details, the tone, the weirdly comic attitude it adopts towards ugly, mean-spirited violence. It seems like the work of a madman -- and, because it was directed by Michael Winner, you know it pretty much is. The British director's once-decent career was on the skids by the '80s, leaving him to helm a number of movies for Cannon, usually starring Charles Bronson (and when Winner stopped, fellow Brit J. Lee Thompson took over). Winner's special gift is that he has little sense or care for what might be considered tasteless, meaning a number of his films (like 1977's The Sentinel) have the appearance of mainstream pop entertainment but the dirty soul of exploitation cinema. It's not that he's being subversive. It's that he doesn't know any better.

Apparently, Charles Bronson was unhappy with the increase in both scope and silliness that the series took in part 3. What was once a dark and gritty series about a broken man seeking revenge as his only hope of healing turned into a movie about a 63-year old guy taking on a street gang born right out of central casting. To put it in more contemporary, fanboy-friendly terms, it would be like if Christopher Nolan had followed up Batman Begins by making Batman & Robin. Screenwriter Don Jakoby (co-writer of both Tobe Hooper's remake of Invaders from Mars and my beloved Lifeforce) eventually had his name taken off the movie and changed to the pseudonymous Michael Edmonds. Winner and Charles Bronson didn't work together again. This seems to be a movie in which some bridges were burned -- but, oh, what a glorious blaze it is. 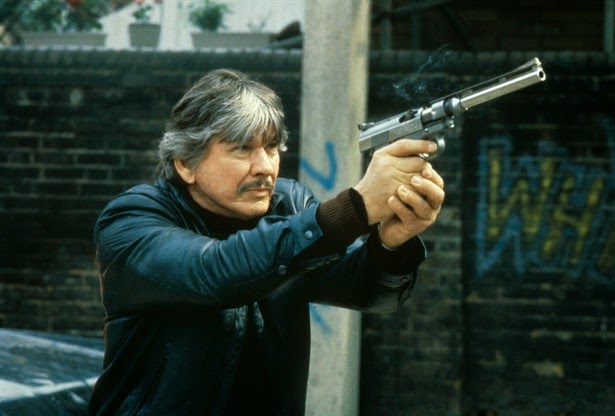 The movie is endemic of a total shift that took place in the mid-'80s towards bigger and more cartoonish action. Consider that Death Wish 3 came out in '85, the same year as Rambo: First Blood Part II. Both movies are huge, overblown sequels to grittier, more thoughtful films -- movies that try (with varying degrees of success) to deal with the ways that men confront the atrocities they have faced. There is no more anger in Paul Kersey, no more pain. He's a guy who kills people because that's what we're used to seeing him do. By removing the emotional component, Death Wish 3 argues that Kersey is just "cleaning up the streets," because the only thing that stops a bad guy with a gun is a good guy with a gun who has been told by the police that he's allowed to murder. The movie is the height of '80s action movie fascism.

Or maybe the revenge angle has been lost because the Death Wish series has run out of family for whose deaths Kersey can seek vengeance, so it just starts inventing new people: "Uh...he's got an army buddy! And that guy dies, too." People, do not let Paul Kersey into your lives. It makes you total gangbait. Look what happens to poor Marina Sirtis (the future Deanna Troi on Star Trek: The Next Generation), who appears here in brownface playing a Latina woman who is raped for being married to a guy that talks to Kersey. 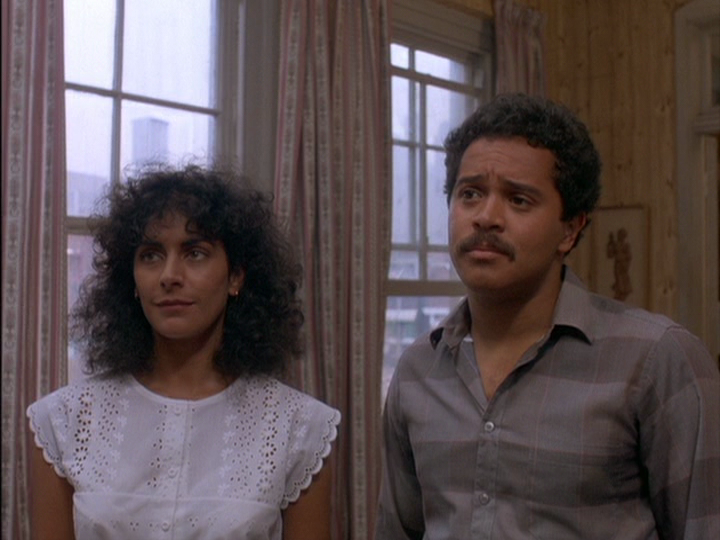 For as much as director Winner seems to want to depict gritty, "real" New York in the mid-'80s, everything about Death Wish 3 is designed by Martians trying to approximate America based only on what they had seen in movies and on TV. The gang members wear facepaint, which was fine in The Warriors because Walter Hill was aiming for a stylized comic book movie. Here it makes no sense. Gang leader Fraker sports an insane reverse mohawk -- you know, the way NO ONE DID. You can almost hear the creative types behind the scenes: "We should give him a mohawk. Those are punk rock and scary!" "No, this guy is ever CRAZIER than that." "What's crazier than a mohawk?" "I have an idea. Pass me the electric razor. Gavan, we're going to pay you an extra hundred box and double your taco allowance for the duration of the shoot, because we're about to make you look so stupid no one could possible be threatened by your fashion choices."

Many scenes in the movie were also shot in London standing in for New York, which is part of what gives it such a surreal vibe -- it's all actors playing dress up gang members, Europe playing dress up as gritty NY. Like so many street crime movies of the 1980s, Death Wish 3 works overtime to make us afraid of the big city...except that what is presented in no way represents an actual city. It would be like suggesting we be afraid of Hell based on what we see in Bill & Ted's Bogus Journey.

And, yes, I mention Bill & Ted because Alex Winter is also in this movie playing a gang member. You can dig and dig and dig, but Death Wish 3 will never stop producing oil. 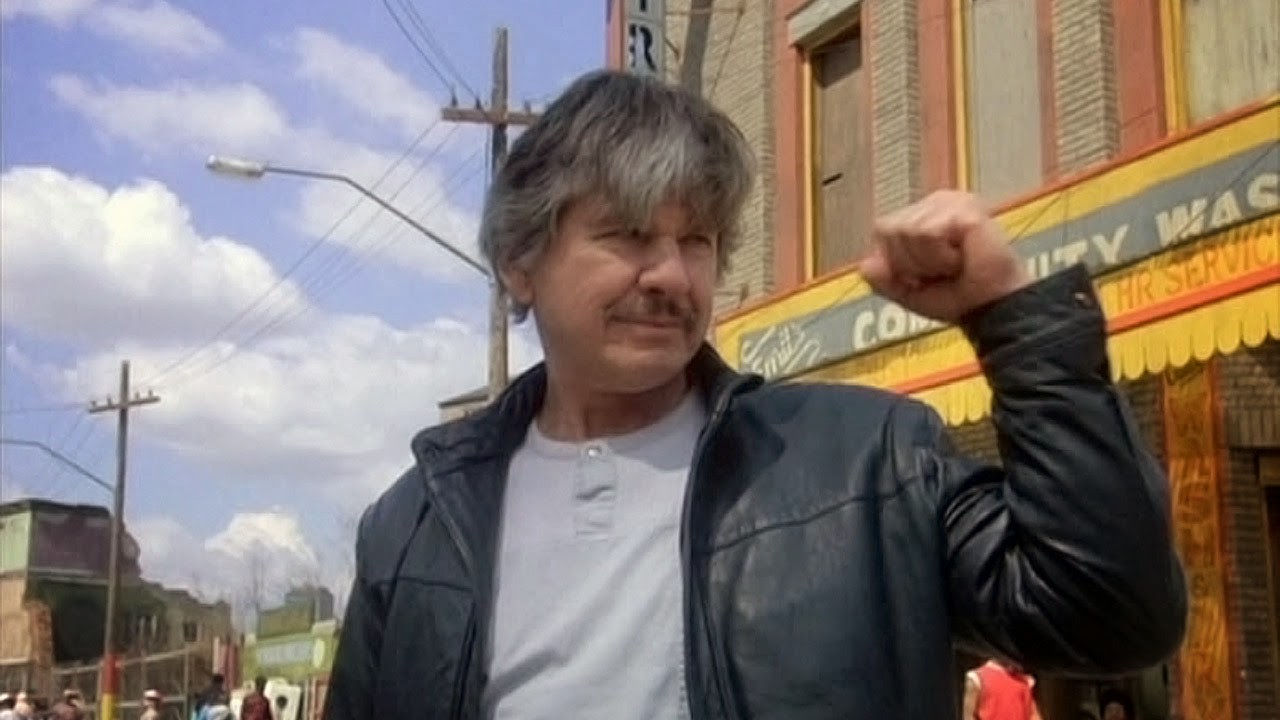 I've never had much use for Charles Bronson as an action star, nor the Death Wish movies as a franchise. Death Wish 3 works both in spite of him and because of him. Because it doesn't really fit into or continue the franchise, nothing about the part requires that Charles Bronson be cast or that he play Paul Kersey again. And yet the fact that he does -- and that he is in his 60s wiping out an army of teenagers -- is another of the film's magic charms. There is no performance or character here, so what we are left with is a former icon of badass cool embarrassing himself not because he's too old to be doing this kind of thing (he totally is) but because he actually looks embarrassed. For once, that grimace perpetually plastered across his face looks like it's holding back laughter. Or tears.

I love Death Wish 3. Love it. And not ironically, either, even though it would be easy to embrace the movie in that context. It is one of my favorite movies in the entire Cannon Group catalogue because it represents so much of what that studio made in the 1980s -- it's cheap and tacky, violent and vulgar but totally sincere in its attempt to compete with mainstream Hollywood. Cannon so clearly wanted to be one of the majors, but movies like Death Wish 3 demonstrate their fundamental misunderstanding of how to do it.

As a lifelong fan of #HeavyAction, I have seen dozens (if not hundreds) of action movies that feel the same -- same plots, same beats, same settings, even the same stunts. Death Wish 3 is the cure for that, a movie that tries to follow the formula but achieves true singularity in the process. This is a movie that features so much murder, often followed by "regular people" clapping and cheering. For murder. It's so entertaining.

Got a movie you'd like to see included in a future installment of Heavy Action? Let us know in the comments below.
Posted by Patrick Bromley at 7:38 AM