I wanted to enjoy The Good Dinosaur but I just couldn’t. While not without some positive elements, Pixar’s latest is ultimately forgettable, especially on the heels of their brilliant effort from earlier this year, Inside Out. Whereas that movie was filled with rich themes and beautiful animation, The Good Dinosaur can only claim the latter. This is a gorgeous looking animated movie. It’s sad that the story it illustrates is so shopworn and undercooked. It’s like they took The Land Before Time, An American Tail and The Lion King, put them in a blender and served. 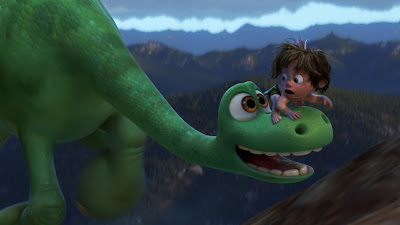 The Good Dinosaur was plagued with delays and production issues and it comes across as the first Pixar movie where the studio seems to be punting. I could be wrong, but it just has an air of a movie that the studio is glad is finally behind them. I was hoping that Pixar would be able to pull this one off, but The Good Dinosaur is merely a simple story, clumsily told and it has a blandness nowhere to be found in Pixar’s best movies.

The plot in brief: The Good Dinosaur posits the scenario in which the asteroid that struck Earth and caused the extinction of dinosaurs missed the planet and life continued for the species. We follow an Apatosaurus named Arlo who is separated from his family and along the way makes an unlikely friend in a feral human boy he names Spot. While searching for his way home, Arlo learns the power of confronting his fears. 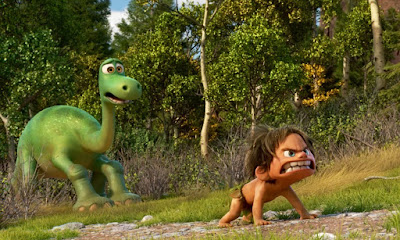 One issue I had with The Good Dinosaur is that the characters are uninspired. Arlo is someone I cared about because he’s portrayed as a helpless and sweet kid, but he’s sort of a passive participant in his own story for much of the movie. I often just felt sort of bad for him. Spot is cute but also a bit one-note, although the “boy and his dog” twist of it being a dinosaur with a pet human is inspired, if more in theory than in execution. The rest of the characters, including a scary, threatening pack of pterodactyls and a pride of cowboy T-Rexes, are more bizarre than entertaining and the other Apatosauruses in Arlo’s family have very little “personality” other than that his father seems to have taken lessons from Mufasa from The Lion King.

The themes are also underdeveloped. The Good Dinosaur is mostly about responsibility, making your mark and overcoming fear (since Arlo is a dinosaur that is afraid of almost everything). However, the movie oddly never really explores why Arlo is afraid and just comes to a pat conclusion that everyone is at least a little afraid and it’s something you have to get through. I think the filmmakers missed an opportunity to really explore fear as a theme in this movie. If Arlo were afraid because of a fear of failure or fear of the unknown, that could have been explored in an interesting way for a kids film, but in its current state there is very little there other than a base interpretation. 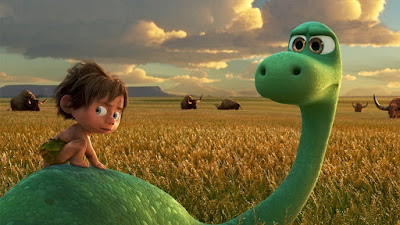 It’s not all bad, though. As I mentioned before, the movie is very striking visually; it's always colorful and with some of the best background animation compositions I’ve ever seen in an animated movie. The trees, fields, landscapes and rivers look photo-realistic, so much that I’m in absolute awe of the skill on display of Pixar’s animators. Simply put, the animation (outside of the characters who are deliberately cartoony) doesn’t even look like animation. My favorite detail is how the rain and water looks on the dinosaurs’ skin. It’s incredible. There is also one great scene (played without dialogue) where Arlo and Spot show each other their family histories. I wish there were more scenes in the movie like this one.

Watching subpar Pixar bothers me more than most other movies because it’s so disappointing considering what the brand normally represents. Not since Brave have I been this letdown by a Pixar movie. Despite being a kind film and featuring a likeable, sweet and simple lead character in Arlo, the movie just isn’t very moving or even entertaining. It sort of meanders from scene to scene with a draggy energy, making the short run time feel long. I also don’t think the movie is good for young kids, since it’s sort of dark and bizarre in tone by the usual Pixar standards (e.g. there’s a scene where a bug has its head ripped off, another where Arlo and Spot are hallucinating on psychedelic berries and one where a dinosaur eats another animal). What a mess.
Posted by Patrick Bromley at 12:00 PM