The 1980s were a different time for fans of obscure films. If the little-known film in question did not show up on VHS, on broadcast television, or onscreen at one of a handful of repertory theaters, said fan was simply out of luck. Two publishing events caused this situation to slowly change: The book RE-SEARCH #10: Incredibly Strange Films appeared in 1986 and Michael Weldon’s invaluable Psychotronic Encyclopedia of Film hit bookstore shelves in 1987. Both of these books described hundreds of weird, wild films—some of them so wild that some readers thought the authors had made some of them up! (But really—what kind of insane sociopath would just MAKE UP a bunch of obscure films?)

Spurred by the popularity of these two books, some small video companies began to selectively release these undiscovered… uh… gems. Little by little, the video floodgates began to open. 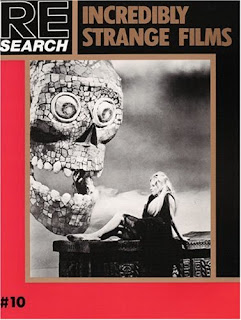 The fine folks at RE:SEARCH Publications graced the cover of their book with a still from an obscure horror movie—actually the first Canadian horror movie ever made, and the first Canadian film in 3-D to boot: The Mask from 1961. Ever since I bought the book some 29 years ago, that cover image has been burnished onto my brain, and I have wanted to see The Mask in its original glory. The image—and the book’s description of this weird, weird movie—inspired myriad unanswered questions within my fevered, obscurity-loving 24-year-old mind. What was that enormous Aztec skull? Why is that scantily-clad lady on that altar? Is the disembodied skull going to kiss her… or eat her? Is that her real hair? And most importantly… When would I get my own “Magic Mystic Mask,” so I could watch this film the way that God (well, Canada’s God) intended?

Babies, I finally have my answers. 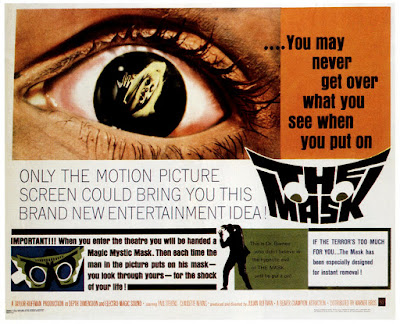 The Plot In Brief: A mental patient/museum worker/Canadian is obsessed with a strange, tribal mask, which finally drives him to suicide. Before killing himself, he sends the mask to his psychiatrist, Doctor Allan Barnes (Paul Stevens). When Barnes wears the mask, he sees strange visions and suddenly wants to kill pretty much every other character in the film—fiancé Pam (Claudette Nevins), receptionist Miss Goodrich (Anne Collings), and mentor Doctor Soames (Leo Leyden). Is anyone safe from THE MASK?

The Toronto International Film Festival and the copyright holders, 3-D Film Archive, have restored The Mask for this 3-D Blu-ray release from Kino Lorber. The 3-D segments were mastered for the first time from original 35mm left/right elements. The restoration of the 3-D elements (and the original cinematography) is out of this world. Seriously, this is one of the best-looking archival releases of the year. 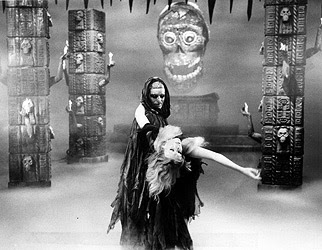 Now, the bad news… The 3-D sequences total only 15 minutes of the running time, and they are the best things in the picture. They’re weird, spooky little nightmares, and they achieve an art-house level of surrealism that combines with the very good 3-D effects to achieve an almost hallucinatory effect. In contrast, the rest of the film feels like an unnecessarily protracted Twilight Zone episode. After a few minutes it becomes achingly clear that the filmmakers simply do not have enough story for a feature-length film. In fact at one point, poor Pam steals the mask, runs out of Dr. Barnes’ office, hails a cab, drives to the natural history museum, and convinces the cabby to return the mask. Barnes follows her, waits until her cab drives away, runs into the now-deserted museum, finds the mask, and takes it back to his office. Aside from making my wife fall asleep, what on earth did that almost ten minute sequence accomplish?

Dr. Barnes, as befitting his Canadian heritage, is one of the most polite and well-groomed monsters in history. His idea of going wild is to loosen his tie and not shave. He spends a lot of screen time wearing the mask and writhing around on a neatly made bed; these sequences are like watching someone have a headache. Barnes actually informs most of his victims of his desire to kill them well in advance, which makes it easy for all of them to avoid being done in!

The film is unique in that it is not completely in 3-D from start to finish. When Dr. Barnes dons the titular object, original audiences were exhorted from the screen to “Put the MASK on NOW! Put the MASK on NOW!” This was their cue to raise their “Magic Mystic Mask” (aka “Miracle Movie Mask,” aka “Miracle Movie Fright Mask,” aka “Cheap Piece of Shit”)— mask-shaped cardboard cutouts they’d been given on entering the theatre. The “eyes” of the mask were red/green 3-D glasses. Clever, huh? 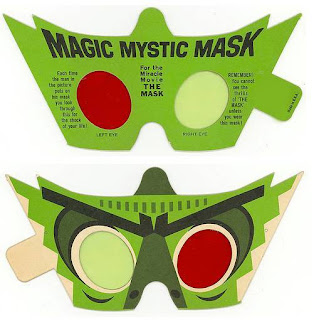 The dullness of the rest of the film undercuts the film’s central theme—Dr. Barnes is dabbling in things best left “undabbled-in” by mere mortal Canadians. The “flat” sections of the film are so boring that we long to “put on the mask” just to relieve the tedium. I am not sure the filmmakers intended their audience to be subconsciously pushing the protagonist toward madness and murder. “Yeah, Barnes, why don’t you just put on that goddamn mask already? That’s the only time anything vaguely interesting happens...”

The new Kino-Lorber disc is full of extras, including a 20-minute documentary about director Julian Roffman, in which his son politely makes the (rather weak) case that there would have been no Canadian film industry at all without his father. The disc also includes the 3-D sequences in anaglyph (red/green) 3-D for those viewers without a 3-D television, although by not integrating them into the rest of the film and by not providing any cardboard 3-D glasses, Kino-Lorber makes it very difficult for a home viewer to watch the film this way. An odd bonus feature is the 2014 3-D short film "One Night in Hell," which uses modern CGI to animate a series of antique glass stereopticon slides with music by Brian May (yes, the Brian May from Queen. Because why not?) 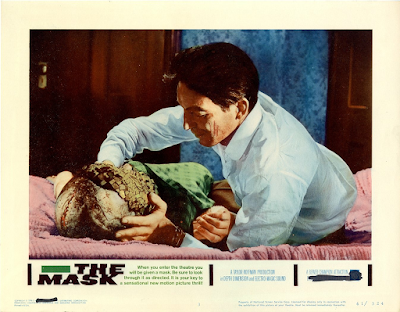 You be the judge, babies. Here’s the original trailer for The Mask, which is suspiciously light on footage from the actual film. In its place, a “supreme authority on all things weird” uses his bizarrely soporific voice to humblebrag about his travels, explain how masks work, and put us all to sleep.

I guess I am glad I saw this movie—after almost 30 years, my curiosity about that book cover has finally been satisfied. Do I recommend it? Not really—but only YOU can decide whether to “Put The Mask on NOW!” or “Put The Mask AWAY!”