Friday Firsts: A Fistful of Fingers 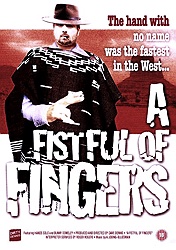 A new column full of firsts kicks off with Edgar Wright's first movie!

Hi, everyone. If there's one thing we don't need here at F This Movie!, it's another semi-regular column. But with some of our old fixtures fading away, I thought it seemed ok to replace them with something new. And it's alliterative! That's some clever shit!

The impetus for the column comes from my wanting to write about Eggshells, the first film from my beloved Tobe Hooper (and a film which I now own thanks to the wonderfulness of Josh Pearlman), and discuss how seeing a filmmaker's earliest effort can be influenced by our knowledge of their entire filmographies. The idea -- and I use the term loosely -- has expanded from there, so that sometimes I'll be writing about a director's first movie and sometimes I'll be writing about my first time viewing something considered to be a classic years after everyone else has already caught up with it. And sometimes it will just be whatever I want it to be, because those are the kids of decisions you can make when you have your own website. Some weeks it won't even run at all. You know how I do.

I wasn't able to check out Eggshells yet -- plus I'm guessing very few people are interested in reading me suck off Tobe Hooper yet again -- so I thought a good place to start would be with Edgar Wright's hard-to-come-by first film, the spaghetti western parody A Fistful of Fingers from 1995. It's a movie made almost a full decade before he came to widespread attention in America with Shaun of the Dead and has just recently celebrated its 20th anniversary with screenings in both Los Angeles and London. 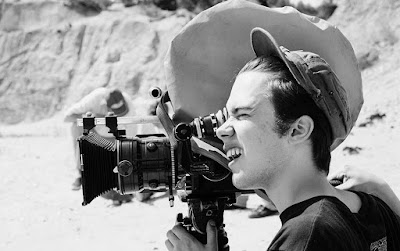 Shot on 16mm for $15,000 when Wright was only 20 years old, A Fistful of Fingers is another genre parody from a filmmaker who became famous for genre parodies -- the zombie movie, the cop movie, the alien invasion movie. This time, he's riffing on the spaghetti western, primarily Sergio Leone's Dollars trilogy. It's the feature-length (at about 70 minutes) remake of a short made by Wright and his friends in school starring Graham Low as "No Name," a raspy voiced drifter out for revenge against a villain known as "The Squint" (Oli van der Vijer) with whom he has history. Along the way he befriends a Native American by the name of Running Sore (Martin Curtis) who helps No Name on his quest for vengeance.

It would be easy to dismiss A Fistful of Fingers as a movie made by a bunch of childhood friends screwing around with a camera, because that's pretty much what it is -- it's a lot like Trey Parker and Matt Stone's Cannibal! The Musical in that way. But these aren't just any friends, and even Edgar Wright's screwing around is a great deal more cinematic than a lot of professional filmmakers trying their hardest. It's incredibly ambitious for a first film, and while it lack's Wright's expert composition it still shows signs of the director he would become. He already knows how to stage and execute a visual gag, and though his editing isn't yet brilliantly whip-quick, it feels like it's on its way. To call this his most poorly paced movie isn't exactly fair, as it's like reading the childhood diary of Stephen King and complaining that his writing isn't yet up to snuff. But at 78 minutes, the movie still sags in the middle. 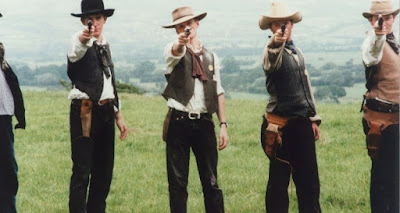 Perhaps most importantly, A Fistful of Fingers demonstrates that even at age 20, Wright had a deep and total understanding of genre. His movies have always functioned as well as they do in large part because Wright can speak the language of whatever genre he's working in without sweating to impress us with how much he knows. It just comes naturally. While he's not able to achieve the scope of a Leone western -- it's still a bunch of 20 year old kids playing dress up and pretending to be grizzled and older -- he gets many of the details right, whether it's the score by François Evans or  the spot-on opening title sequence animated by Wright's own brother Oscar (who also provides a very funny animated sequence detailing the fate of the Native Americans midway through the movie). It's not able to both be the thing and a spoof of the thing the way his better movies are, but it's fun to see him flexing those muscles and work out how to synthesize his affection for other movies and filter it through his own voice.

Wright's later movies start from a place of story and character -- they exist within the framework of their respective genres and demonstrate all the tropes and signifiers that come along with them, but he builds his films from the ground up and adds the gags on top. A Fistful of Fingers is reverse engineered from that model. It's a bunch of jokes strung together on a Spaghetti Western clothesline, more like the Zucker/Abrams/Zucker movies of the '80s than what he makes now. The jokes come fast and furious for the first few minutes, reminding of just how funny Wright can be and promising a previously undiscovered comic gem. The pace doesn't last because it almost can't. Once characters like Running Sore show up (Wright's uncomfortable use of brownface on Curtis can be chalked up to youthful cluelessness and the fact that it was the '90s, I guess) the jokes slow down and the scenes start to go on too long. Wright himself has said the movie worked better in its short form, but he was determined to get it to feature length and had to use everything he shot to get there. 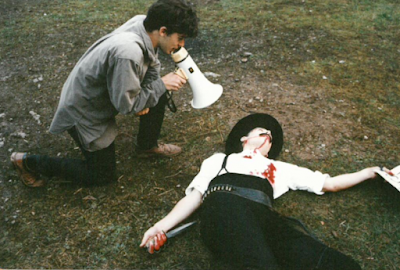 There are still plenty of traces of the Wright we've come to know, though. Borrowing a page from Monty Python and the Holy Grail, no one in A Fistful of Fingers rides a real horse but rather prop horses made of wood and cloth. Still, when (spoilers) one of the "horses" falls off a cliff, it explodes with blood when it hits the bottom. Edgar Wright gotta Edgar Wright. Characters have limbs and heads chopped off and the gunshots revel in Peckinpahian squibbery (both words, I assure you). The violence is always played for laughs, an approach that Wright would carry through his films in the 2000s (though a couple of Shaun of the Dead's goriest moments aren't meant to be funny at all). For as broad as many of the laughs are, they're always played with a straight face. His comedies work because they don't acknowledge that they're funny.

Edgar Wright sometimes seems in danger of being ruined by web hyperbole -- he has become so beloved in so many corners of the internet that his work can't hold up to hype. A backlash is just a forgone conclusion. He remains, to me, one of the most talented and exciting voices of his generation, making movies that speak to me in a way that many others do not. A Fistful of Fingers feels a lot like a first movie in the way that Martin Scorsese's Who's That Knocking at My Door? does: it's incredibly rough and youthful, but the raw materials are there for what would later become the director's signature style. A Fistful of Fingers is fun and silly. It might not be great, but it helped give rise to the career of Edgar Wright. That makes it important.
Posted by Patrick Bromley at 5:00 AM