So much good stuff this week. 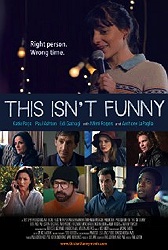 Adam Thas: This Isn’t Funny (2015, dir. Paul Ashton) When I got through watching this movie I wasn’t sure if I liked it, but I did know I liked a majority of the cast. Then as a few days went by I found myself still thinking about it and I realized I was a fan of This Isn’t Funny. It has the same simple “boy meets girl” premise that we’ve seen in countless rom-coms, but to call it a “rom-com” would be way off base as it’s darker and smarter than most rom-coms I’ve seen. Paul Ashton plays Jamie Thompson, a juice bar manager who falls for stand-up comedian Eliot Anderson, played by Katie Page. It’s a simple plot but heavy on the character development that follows how two very flawed individuals develop a relationship. What I most enjoyed about it is that I still couldn’t help but like characters that give you a lot of reasons to hate them. When the movie started, I instantly had the same reaction to Eliot that I do to Hannah from Girls, which was worrisome because Hannah is infuriating by design. However, a lot of credit needs to go to Katie Page, who gives a very enjoyable performance and had me falling for a “crazy person” by the end of the movie, making me hope that I see more of Katie Page in movies. This Isn’t Funny does have its problems, with a few jokes that don’t land and a few plot decisions I had problems with, but there is also a lot to like. You may walk away from This Isn’t Funny not loving it, but I would be surprised if you end up hating it. 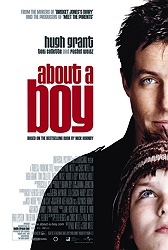 Erich Asperschlager: About a Boy (2002; dir. Chris and Paul Weitz) There are plenty of holiday movies to watch this December. Santa, elves, presents, trimmed trees and the like are in abundance in films ranging from classics to cartoon cash-ins. You want Christmas wrapped in a celluloid bow? You got it. But when it comes to holiday viewing, there's something to be said for movies that can best be described as "Christmas adjacent." Films like It's a Wonderful Life, Die Hard, Die Hard 2, and A Talking Cat!?! have been ushered into the holiday canon simply because they take place during the Christmas season and/or feature a cat that sounds like Eric Roberts. Christmas-adjacent movies have become very popular in recent years, especially with folks who refuse to admit they get misty-eyed every time Mike Brady is pulled from the rubble of the collapsed building at the end of A Very Brady Christmas. To those people I say, why not give About a Boy a try instead of watching A Talking Cat!?! for the twentieth time? This extremely pleasant British comedy has a lot going for it. Based on a book by Nick Hornby, starring Hugh Grant, Toni Collette, and Rachel Weisz, directed by American Pie's Weitz brothers, and with a catchy rock soundtrack by Badly Drawn Boy, this is a super watchable comedy with things to say about the difficulty of relationships, parenting, and singing '70s pop hits in front of a crowd of your peers. It's not strictly a Christmas movie, but there are some scenes at Christmas and also a subplot about how Hugh Grant's self-centered bachelor character lives off the royalties of a novelty Christmas tune written by his father. That should be enough to convince your friends and family to gather around the television's warm glow and give it a try. If not, then assuring them it isn't the recent NBC remake should do the trick. 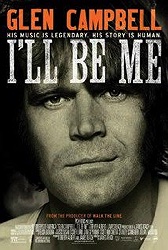 Heath Holland: Glen Campbell: I'll Be Me This might be considered something of an esoteric pick, as I doubt there are a ton of Glen Campbell fans on this site. My appreciation of the musician/actor has grown exponentially in the last three or four years, but the real reason I'm recommending this documentary is because it's important to me. Glen Campbell: I'll Be Me takes a look at the man's career, but also his diagnosis with Alzheimer's Disease and subsequent retirement from the spotlight. He's been told that soon he won't remember how to play the guitar or make music, but more importantly, that he's going to forget everyone that he loves, so he's saying goodbye while he can. Typing that sentence devastates me, especially since this has touched my own family recently. Still, there's beauty in being able to say goodbye, and this documentary allows Campbell something that not everyone gets. This is definitely not for everyone, but I'm sure it's for someone. 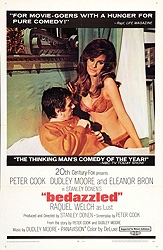 JB: Bedazzled (1967, dir. Stanley Donen) Boy, this movie (the original and still champion, not the Brendan Frasier remake, which has its fans) was very, very difficult to see for a very, very long time. I am jealous and envious of my students, who have access to thousands of classic films by merely stealing someone else’s Netflix login credentials. Get off my lawn. There is so much to love here: Peter Cook and Dudley Moore fresh off their early success with the comedy revue Beyond the Fringe, Stanley Donen directing with a real feel for the material, Eleanor Bron (sigh) in a rare romantic lead, and of course, the Order of the Leaping Berylians, a cloister of nuns on trampolines. I am convinced that there was a short window of time in which Peter Cook (who penned the screenplay) was the funniest person in England. A recent book about the early days of Monty Python reveals that all of its members were in awe of Cook back when they were all just college students at Oxford and Cambridge. It is such a shame that most Americans only know Cook decades later as the “Mawwidge… bwings us all together” priest from The Princess Bride. Sigh. Cook plays Satan here (actually named George Spiggot) to Dudley Moore’s Faust. Cook promises Moore seven wishes in exchange for his soul, wishes that Moore uses to woo the love of his life, Bron. It doesn’t go well because (spoiler alert!) Satan is a liar. Along the way, we get ancillary and tangential material about Pop stardom, Froonie’s Green Eye Wash, the love life of houseflies, and, of course, Raquel Welch. 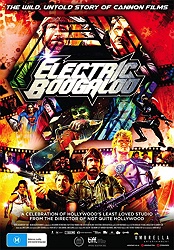 Patrick: I'm going to recommend two movies this week, which I know I'll regret next week when I can't think of anything to suggest. But there are two titles that I'm pretty passionate about that just hit Netflix and you'd be wise to check them both out this weekend. The first is Electric Boogaloo: The Wild, Untold Story of Cannon Films (2014, dir. Mark Hartley), a feature-length documentary chronicling the history of Cannon Films. Anyone who reads this site (or has ever talked to me) knows that Cannon is very near and dear to my heart, and this documentary is a celebration of all those crazy, trashy movies as well as the story about a studio that lived and breathed movies but overextended themselves and eventually collapsed. There are a bunch of great talking heads, some really fun stories and, best of all, a ton of clips from my beloved Cannon library. If you're completely unfamiliar with Cannon, this is a great place to start. If you know and love them as I do, it plays like a greatest hits reel.

My second pick is Tangerine, writer/director Sean Baker's comedy about a day in the life of two transgender prostitutes hustling in L.A. The movie made a name for itself by being shot entirely on an iPhone, and if that gets you to check it out as a curiosity it will be worth it. The film is gorgeous and buzzing with life, funny and profane and moving. It's also a Christmas movie -- hopefully one that people will begin to revisit every year. I reviewed the movie back in August and it still remains one of my favorites of the year.
Posted by Patrick Bromley at 12:00 PM