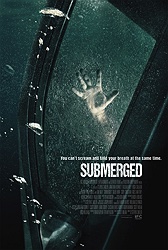 Submerged is like a sitcom "bottle episode," except the bottle is a limousine and the limousine is trapped underwater. How's that for a hook?

I'm a big fan of Steven C. Miller, a director who works primarily in low-budget genre films but who really knows how to put a movie together. After getting his start with the massive zombie epic Automaton Transfusion made for only $30,000, Miller has been turning out carefully constructed, beautifully photographed films that stand out from their indie movie brethren with artful slickness and supreme confidence.

His latest, Submerged, is a claustrophobic action thriller starring Jonathan Bennett as Matt, a driver/security guy for a shady businessman/gangster (Tim Daly) who just happens to have a very beautiful daughter named Jessie (Talulah Riley) he wants protected. While driving her and her friends back from a club one night, Matt's limo comes under attack and is driven off the road into the river, slowly sinking to the bottom with Matt, Jessie and her friends must find out a) who's trying to kill them and b) try to get out of the limo before they all drown. Maybe not in that order. 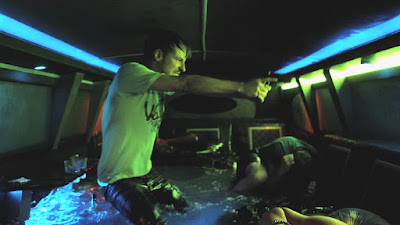 We've seen our share of "bottle" movies in recent years, with characters spending entire films trapped in phone booths and ATMs and coffins and cars both on the road and overturned. The screenplay for Submerged (by Scott Milam, who also wrote the underrated Mother's Day remake) is smart not to confine the entire story to the back of the limo, opening it up for the first and third acts to provide some Lost-style backstory and resolution. It's not that Miller couldn't have handled the demands of maintaining the single location for the entirety of the running time -- I have every confidence that he could -- but the characters trapped in the back are too shrill and unlikable for us to want to spend that much time in their company. Bennett establishes sympathy early on (in part thanks to the backstory he's given), but he's really the only one worth caring about in the limo. 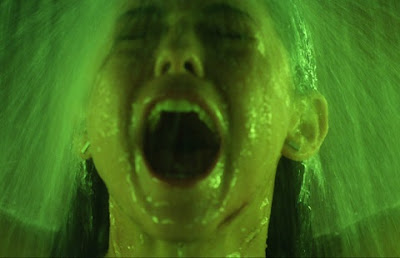 The final act is particularly problematic, as the movie shifts gears and becomes much more of a conventional thriller complete with surprise revelations and lots of characters explaining things. Up to this point, Submerged was a tight, idiosyncratic little thriller made with enough skill and artistry (Miller continues the style he really began in Silent Night in which he saturates his frames in bold colors) to exceed any limitations place upon it. The last third, though, feels too much like any number of DTV thrillers and cheapens some of what came before. 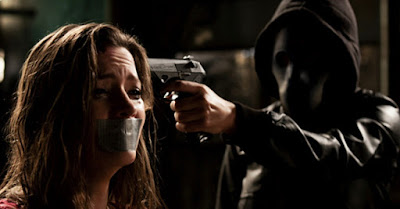 While I'm not crazy about that last act, it's not enough to completely derail what Miller accomplishes in yet another movie. He continues to prove that he's able to take fairly thin genre material, make it look great and move effortlessly, creating something that shouldn't work but is surprisingly good (see also his "more violent Home Alone" [the great The Aggression Scale] and a remake of Silent Night Deadly Night). After this many movies, it really shouldn't be a surprise any more. Plus, Bennett cuts a decent action figure -- pay close attention to his John Wick shooting style -- Mario Van Peebles lends some cool in a small supporting role and Rosa Salazar, so good in this year's little-seen festival player Night Owls, creates some authentic terror in the back of the limo. There are pieces that work better than others, but it's Miller's skillful artistry that holds it all together.

I'm not the only one who has noticed, either. According to his IMDb profile, Miller has a Bruce Willis movie already shot (Extraction), one Bruce Willis movie currently shooting (Marauders) and two more Bruce Willis-less films already in pre-production (and yes, I know that it's IMDb and these "pre-production" designations could very well be meaningless). I'm excited to see Miller step up to the next level and hopefully get larger budgets and greater resources. After all, if he can make a $1 million movie look like a $10 million movie, imagine what he can do with $10 million? Give Steven C. Miller a Star Wars movie already.