Last week I wrote about some of the things I was thankful for, and I disclosed that I’ve recently become a Chuck Norris fan. Admitting that in a public forum was liberating, so I thought this week I would come clean and really dig into my new Chuck appreciation. See, until just a matter of weeks ago I’d have been the last person you’d expect to watch one of his movies. I admit to making fun of the guy over the years, but the truth is that he was barely a blip on my radar. I knew who he was, I saw Sidekicks in the theater, and I had watched him alongside Bruce Lee in Way of the Dragon back when I was a teenager. Yet, outside of that, he was never someone I was interested in watching. It was less about avoiding him and more about total apathy and sometimes making fun of him because I just didn’t care.

Chuck Norris is not a charismatic man. He’s not a good actor and he always seems vaguely uncomfortable on screen, but also kind of…vacant. In a lot of ways, it’s perplexing that he’s been in so many movies over the years, because a lack of charisma in a film star totally defies all traditional movie logic. Then again, Norris was never an A-level star; his domain was always the B-film, cheap and dirty, and the world of exploitation seems to suit him. I’ve always been a fan of guys like Sylvester Stallone, Arnold Schwarzenegger, and Jean-Claude Van Damme because I grew up when their movies were the biggest things ever, but it’s only been the past couple of years that I started to develop an appreciation for the other guys who have been toiling away in cheap action flicks for the past two or three decades. I’m talking about your second-tier stars, and Chuck Norris definitely falls into this category. Maybe even third-tier. 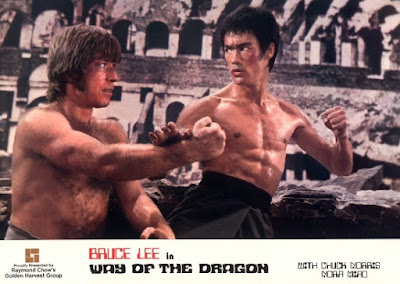 You know how there are all those Chuck Norris memes floating around? There are calendars and books talking about how awesome Chuck Norris is, filled with facts like “When Chuck Norris chops onions, the onions cry” and “When Chuck Norris does push ups, he doesn’t push himself up; he pushes the earth down.” That’s not what this column is. I have not developed an ironic appreciation for Chuck Norris because he’s so lame that he is therefore fun to ridicule. No, I have a genuine appreciation of his movies now and I get joy from watching him do his thing.

I have decided that Chuck Norris is, in fact, awesome. He was a legitimate karate champion for six consecutive years and was 1969’s triple crown winner for the most karate tournament victories during that year. He’s a real-life tough guy who fought hand to hand combat for years, served in the military, and taught martial arts to Steve McQueen. This is all very easy to forget when you’re watching a bad Chuck Norris movie like 1995’s Top Dog, but facts are facts. Some action stars have more street cred than others, but no one can say that Chuck Norris is a poseur.

Then again, I don’t want to put too much importance on the man himself, because that’s not what really matters. As much of a true tough guy as Norris is, there are also lots of things he has said and done that I don’t like. He’s very vocal in his political affiliations, and I wince when I’m flipping through the channels and I see him on an infomercial for the Total Gym home exercise machine. I absolutely have a hard time separating the work actors do in movies from their private lives, so I try not to focus on the stuff Chuck Norris says about his beliefs, or the candidates that he donates money to, and I try to focus on the movies themselves. That’s really what matters, and so far I’m able to completely lose myself in the gritty Cannon films and ‘80s one-man-army schlock that he pumped out in large quantities. 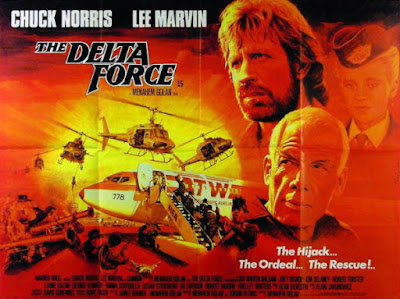 Maybe that’s the secret. Chuck Norris is an exploitation star, and he’s at his best when he’s making those kinds of films. Luckily, that’s pretty much what almost all of his movies are, and you can’t do a flying scissor kick without hitting a revenge movie or an escape movie or a movie about how awesome America is and how evil/corrupt/helpless everyone else is. You don’t have to agree with the sentiments behind a movie to be totally entertained by it, and that’s what I’ve discovered about Chuck’s oeuvre. It’s incredibly easy to lose yourself in the near-mindless action of a Chuck Norris movie and understand that there was a place, a time in American history, when we really thought this attitude was the greatest thing ever. Just as surely as the Missing in Action trilogy rides the coattails of the Rambo films, there is a purity in seeing someone shooting first and asking questions later, or bringing home POWs that bureaucracy couldn’t save. Here’s a guy who has the power to defend himself and those around him when the wolves are at the door. Chuck Norris movies give power to the powerless and hope to the hopeless. That’s what exploitation does: it plays to your basic instincts and desires. And let’s not forget fear.

Or maybe I’m over-analyzing this whole thing. Maybe I like Chuck Norris movies now because there are lots of bullets, big explosions, and fist fights. Because I can see a guy roundhouse kick another guy in the face. Because I can watch a dude shoot a missile into a moving target without aiming or looking, then walk away in slow motion without turning around. Maybe it’s because he’s always got a killer beard or a rockin’ mustache. Maybe it’s the mullet. Maybe it’s because he has impenetrable, dead eyes. Maybe it’s all of this.

The good thing about coming to Chuck Norris fandom at this point is that there’s a mountain of stuff waiting for you. It will take me a long time to get through all the Chuck Norris movies I’ve been accumulating, and that doesn’t even include his television work. I went to see my family for Thanksgiving and ended up sitting on the couch beside my dad late into the night after everyone else had gone to bed. I was caught up in the “Black Friday Tough and Tender Marathon” on some cable channel, which was playing back to back episodes of Walker: Texas Ranger. I had never watched the show (a point of pride), but my Walker cherry got popped over the Thanksgiving holiday. The scariest part was that at first I thought it was awful (nothing like “Early Chuck,”, when he’d kill a guy as soon as look at them), but slowly started to warm to it. By the time midnight rolled around, I was enjoying myself quite a bit. There was a silent bond forming between me and my father over Chuck Norris. You see? CHUCK NORRIS BRINGS PEOPLE TOGETHER. Now that I’m back home, I still keep thinking about Cordell Walker and the drug lords and street toughs that I haven’t seen him take down yet. 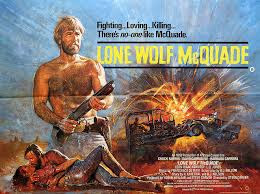 It’s all a little embarrassing and hard to admit, but this is the truth, and they say the truth can set you free. I’m not sure what free means in this case, unless it means freedom to watch all the Chuck Norris movies I can get my hands on with the shades open and the lights on without a shred of shame, and if it’s that then I’ll take it. What about you all out there? Am I on my own here, or do other people secretly enjoy the heck out of The Delta Force or The Octagon? Let me know in the comments below. And give me recommendations! I’m just getting started on this long road of Chuck, and I’m eager to know what people consider to be his better films.
Posted by Patrick Bromley at 12:00 PM