Question: you’ve just starred in the biggest box office success of all time and your face is on trading cards, novels, comic books, and lunch boxes. What do you do next? If you’re Mark Hamill, you star in Corvette Summer.

1978’s Corvette Summer has achieved cult classic status over the years, mainly because it’s the only movie that Mark Hamill starred in between 1977’s Star Wars and 1980’s The Empire Strikes Back, yet it still seems to be considered something of a punchline, and Star Wars fans in the know have used it as a type of secret handshake. “So you’re a fan of the wars, huh? Well, have you watched Corvette Summer?” In fan circles, my reading is that this movie is only one step above The Star Wars Holiday Special in terms of quality, and that’s too bad. Mark Hamill had been in a handful of films before his breakout role as Luke Skywalker, and he would go on to star in a plenty more afterward, but Luke Skywalker became such a household name that it seemed to hang over everything he did during the ‘80s. Eventually Hamill went on to have a thriving second half of his career as a voice actor until that galaxy far, far away came calling once again. Corvette Summer is special because it offers a glimpse at what could have been if things had unfolded differently. 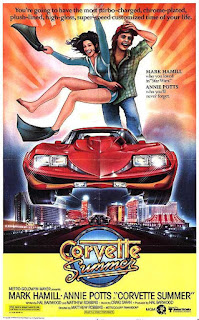 The story of Corvette Summer involves Kenneth (Hamill), a high school senior, who rescues a wrecked 1973 Corvette Stingray from being demolished at a junk yard. He spends his time at trade school restoring the car and crafting it into a weird, customized hot rod that looks more like a Hot Wheels toy than something you’d see driving down the road. After the car is completed, one of his classmates (Danny Bonaduce) takes it for a spin where the car is stolen. Depressed and angry, Kenneth soon learns that his car has turned up in Las Vegas, so he sets out for Sin City with no money and no plans other than to find the hot rod. Along the way he meets a prostitute-in-training (Annie Potts in her first feature film) and finds himself becoming more interested in her than in the car.

Look, Corvette Summer is not a great movie, but it’s not a bad movie either, especially not with appropriate expectations. I think that’s key, really: expectations make or break this movie. This is not the next blockbuster from a breakout star. It’s a modestly-budgeted little exploitation movie that Hamill chose because it was a big departure from what he’d just done. In interview during the time of the film’s release, he talks about how he wanted to do something where he didn’t look, act, or talk like Luke Skywalker. Well, he succeeded. It’s a really good performance that feels natural and slightly intense (not necessarily in a good way), but it’s nice to see him doing something outside the Lucasian acting style of “faster and more intense.” 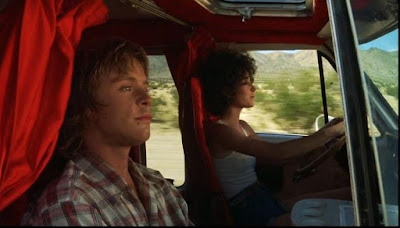 Annie Potts…OMG, you guys, I love her in this movie. I mean, I enjoy Annie Potts in the Ghostbusters> films, and I even remember liking her when I would watch the TV show Designing Women back in the day with my folks, but I adore her in Corvette Summer. She’s kind of like the ‘70s precursor of the Manic Pixie Dream Girl, only she seems to make Mark Hamill’s life way worse instead of better. She looks like she weighs all of about 90 pounds soaking wet, but she gives an absolutely gigantic performance in the film. She’s foul-mouthed, self-destructive, and a complete mess who has no idea where she’s going, yet she somehow manages to balance that with a softness and freedom that you can’t help but want to be around. Think Kate Hudson in Almost Famous, only as a hooker. It’s absolutely stunning to me that this was her very first film role, because she just seems so natural. In the same interview where Hamill talks about wanting to do something different, he says that he loved working with Potts because she reminded him of Judy Holliday. He’s absolutely right. There’s a scene, probably my favorite with her, where’s she’s drinking vodka from a bottle and then swigging orange juice to make her own little screwdrivers. Breaking news: I’ve just realized that I have a crush on Annie Potts.

It’s worth pointing out that both Mark Hamill and Annie Potts had both recently been in horrible car crashes prior to filming. Hamill’s car accident is literally the stuff of legend, as no one has ever explicitly told us exactly what happened and the details are shrouded in mystery. Sometime after he wrapped principle photography on 1977’s Star Wars but before the film had been completed and released to theaters, Hamill was speeding on some back road when he ran off the highway and flipped his car. His nose was broken so badly that he says that took cartilage from his ear to rebuild it. Allegedly, this is why The Empire Strikes Back begins with the wampa smacking Luke Skywalker across the face. I say allegedly because there are accounts that both support and deny this. Meanwhile, Annie Potts had been in her own car accident which left her with pins in her leg, causing her to walk awkwardly. So Mark Hamill sometimes looks visibly different in Corvette Summer, which started filming very shortly after his accident, and sometimes it looks like he’s got a ton of makeup on his face to hide the scars. Or then again, it’s entirely possible that I’m just imagining this because the scars are talked about so much. Annie Potts walks funny in the movie, and they actually wrote a reference about it into the dialogue. For me, this only adds to the charm of the film. 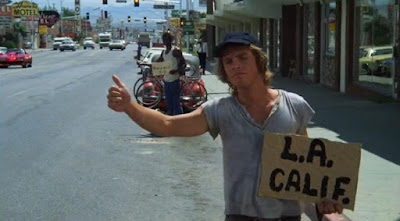 And there’s a lot of charm to be had. Truly interesting situations and funny interactions are here, as well as some boring stretches that don’t really do anything to advance the story or the characters, but hey, that’s b-movie filmmaking for you. And let’s not forget that this was the 1970s, the decade of filmmakers who were less interested in where they took you than in how they got you there. Speaking of filmmaking, you know the guy who co-wrote Crimson Peak with Guillermo Del Toro? His name is Matthew Robbins, and he wrote this movie too. It was also the first movie that he ever directed. You can tell it’s a directorial debut because of the uneven pace and the floundering middle act, but he later went on to direct Dragonslayer and The Legend of Billie Jean, both of which I think are pretty good, all things considered.

Corvette Summer isn’t a lost gem, but I feel like it deserves better than it’s reputation as “that movie with Mark Hamill that’s not Star Wars. Then again, it’s been a while since I’ve heard anyone outside of the Star Wars fan community even bring this up, so it might even be slipping into total obscurity. Perhaps now that the Star Wars franchise once again on top, Mark Hamill’s body of work (ooh la la) will begin to be reconsidered and evaluated. He does a great job with the role, and Annie Potts is just magnetic. Hamill seems to be really proud of the movie, and he should be. It’s a cool little picture about a guy, a girl, a car, and the shimmering lights of Las Vegas. I know we’re months away from Junesploitation, but it’s worth considering for your lineup when the summer gets here. It’s on various streaming sites as well as a DVD from Warner Archive.