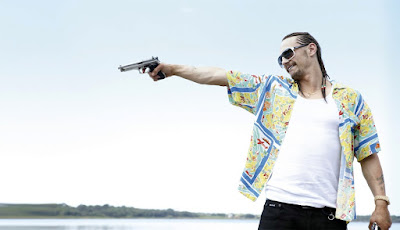 It’s the end of the world as we know it, and I feel Franco.

That’s the one-liner that introduces us to This Is The End on Netflix and you would not believe how often that runs through my dumb head. You see, I go through phases where I cannot get enough of a specific genre or style of film, and very recently my genre of choice has been James Franco. This is mostly due to my favourite book-turned-mini-series 11-22-63, currently being aired on Hulu and Franco at the centre of both the acting and the directing of the show. Briefly: The show is similar, but to say that it is true to the story is a LIE, as has been stated by so many reviewers of the series. Story aside, the show is good, but I think it is one of my lesser love-on-Franco roles. Due to my warm-ish feelings surrounding him in 11-22-63, I felt needed to revisit my fantastic-Franco. Well, more specifically, his ability to embody a particular character and bring to life all that is, was and might have been. 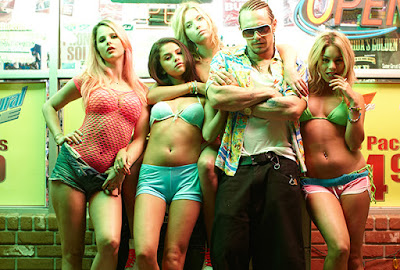 I wasn't always a Franco-fan. In fact, he was one of those actors that I recognized by face, not by name. (This is that douche that tried to steal Spider-Man's girlfriend!) But then one night a couple years ago Netflix recommended I watch Spring Breakers and THAT was my breakthrough eye-opening Holy-Shit-Who-The-Hell-IS-This-Guy moment. Wow. I was excited, yet somewhat leery to revisit it for this piece, as I was worried that I might discover it's enchantment over me had worn off. BAH. It did nothing but solidify itself as one of my all-time favourite movies, and its spell over me grows only stronger with age. This is due first and foremost to “Alien,” the character I love to hate and hate that I love. Simply put, he's a drug-dealing gangsta, with Scarface on repeat (on repeat), who lives Spring Break Forever. He makes it uncomfortable, nearly impossible to watch his interactions with the girls, yet I continuously find myself unable to look away. His is an exceptional and mesmerizing performance that is hands-down my favourite Franco, and always leaves me singing Britney Spears for days afterwards

That was dumb. I started with my favourite, which means it's all downhill from here! Heh heh. 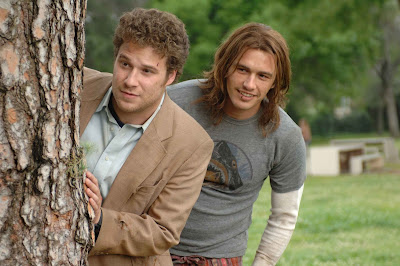 Okey dokey, so sometimes it’s the chemistry of the actors that make or break a film. And the ridiculous antics of James Franco and Seth Rogen have not once failed to entertain me. (Especially since some of the best moments the duo shared were improvised.) James Berardinelli wrote: “…buddy films aren't fundamentally that different from romantic comedies. The relationships are often developed in the same fashion, only with male bonding replacing sexual chemistry." And I couldn’t agree with him more. As a non-fan of romantic comedies, I opted for some of my favourite “buddy films”: This Is The End, The Interview and, of course, Pineapple Express. Based on the abundance of both 10 and one-star reviews plastered all over the web for all three of these films, their particular brand of humour is not for everyone, but as usual, anything sarcastic, crass and full of assholey-charm is right up my alley. When placed side by side, I noticed that Rogen’s characters are somewhat similar in each film, the contrast of which is quite a different yet loveable-dumbass Franco in each. And to be honest, I can’t even pick a favourite between the three characters. I love them all! 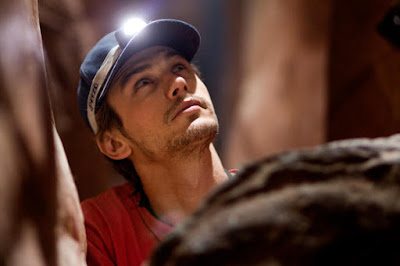 BAM. 127 Hours. I really REALLY like this movie, like a lot a lot. The first time I watched it. though, Buried was what played through my mind (similar but completely opposite) and I had a hard time separating the two. Weird right? Am I the only one? On this viewing, though, Buried was wonderfully absent and I was able to enjoy the movie on a whole new level. It is a beautiful film, and James Franco, our man at the centre, gives the most incredible performance of a man who feels all of the feelings, continues to hope in the most hopeless of situations and defies all the odds and comes out on top. Franco -1 Nature -0.

Now, I really love Franco the actor, but I needed one film he directed to be included in here. And as in real life, I opt for crazy every time, hence Child of God, the gothic tale of madness and perversion, was my pick. Call me crazy, psycho, or whatever, but I really, REALLY liked this movie. Based on Cormac McCarthy’s novel of the same name, Franco’s film is beautifully haunting, and full of a consuming tragic desperation. Through the incredible Scott Haze, Franco has woven his own dark humour and poetry and created an incredibly dark image of an outcast that left me haunted and in shock over my actual sorrow for the despicable man. 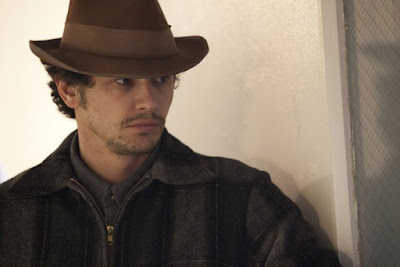 As in real life, we all have our hits and misses, I could have just as easily listed a few of my least favourite Francos, but that would be defeating the purpose of Movie Love For Movie Lovers, now wouldn't it?

Just because I started with it, doesn't mean I can't come full circle and end with it as well. And I will, 'cause I'm in charge ‘round the confines of this here page.

Spring Break Forever Bitches.
Posted by Patrick Bromley at 5:00 AM

Email ThisBlogThis!Share to TwitterShare to FacebookShare to Pinterest
Labels: 127 hours, child of god, james franco, seth rogen, spring breakers, this is the end