Off the Shelf: Kill Me Again (Blu-ray) 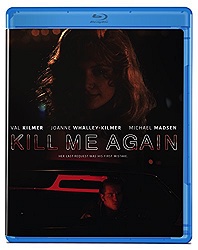 Her last request was his first mistake.

No filmmaker can claim more credit for the early '90s revival of the neo noir than John Dahl. Between Red Rock West and The Last Seduction, Dahl practically ushered in a subgenre unto himself -- the John Dahl movie. Though his noirish tendencies would find their way into his later, more high-profile work like Unforgettable, Rounders and Joyride (his first three features were barely released, discovering their audiences on cable), it was really his first three movies that created the template for the John Dahl movie. And it all started with 1989's Kill Me Again.

Dahl's debut feature marks the second and final onscreen pairing of Val Kilmer and Joanne Whalley (at the time Joanne Whalley Kilmer, having married her co-star after falling in love on the set of Willow). She plays Fay, a standard issue femme fatale who pulls off a robbery with her crazy, abusive boyfriend (a young Michael Madsen) and then double crosses him and steals the money. To ensure that he won't come looking for her, she hires Jack (Val Kiler), a private investigator indebted to the mob, to stage her death. This being a film noir, we know that no one is getting off that easy. 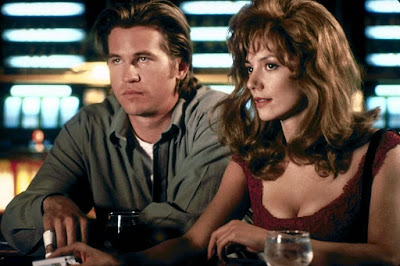 Kill Me Again is a perfectly serviceable neo noir: it hits the beats it needs to hit, it's relatively stylish and at just over 90 minutes long goes down easy. The movie's big stumble is that it's not enough of any of the things it needs to be. It's stylish, but not stylish enough. It's sexy, but not sexy enough. Kilmer plays a traditional noir hero, but not enough of a traditional noir hero. He's not the easily manipulated fool in the tradition of Fred McMurray in Double Indemnity (or even William Hurt in Body Heat), nor is he of the hard boiled Ralph Meeker variety. Kilmer tries to create a character whose jaded and knows he's being worked, but there's very little in his performance that suggests that he's that cynical or playing an angle. He just comes off as dull and a little grouchy. Truth be told, he seems miscast.

If nothing else, Kill Me Again helps make the case that Joanne Whalley should have had a bigger career. She's worked a ton and been in a lot of stuff -- maybe she's had the exact career that she wanted -- but aside from this movie and Scandal she rarely got a role this substantial. For the first half of Kill Me Again, Whalley really works it; in the grand tradition of femme fatales, she transforms herself into whatever she suspects men want her to be in order to get what she needs from them -- sometimes the doe and sometimes the snake. She's let down by the movie's second half, which shoves her aside to focus more on Kilmer's point of view; unsurprisingly, this is also when the movie gets less interesting. While Whalley isn't on the level of Linda Fiorentino in Dahl's The Last Seduction (and to be fair, hardly anyone is; that woman is a force of nature in that film), she gets off to good start before diminished screen time and convoluted plot twists get in her way. There's a reason the movie is called Kill Me Again. 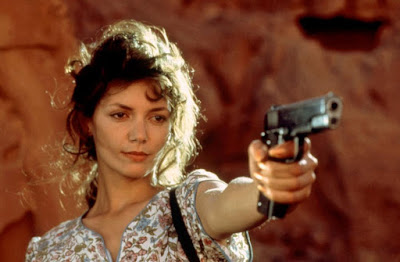 Kill Me Again is like a lot of first films: it sets a tone, it establishes a voice but plays in many ways like a rough draft of what would come later. It's fun to see Michael Madsen doing an early version of the psycho criminal he would play throughout the '90s and Whalley does some nice work, but there are too many other good neo-noirs of the period -- several of them directed by John Dahl -- to give this one too strong a recommendation. Fans of the actors or of the subgenre may be interested, but everyone else can catch it on cable.