Off the Shelf: Making the Grade (Blu-ray) 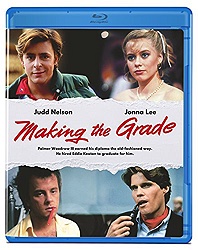 Palmer Woodrow III earned his diploma the old-fashioned way. He hired Eddie Keaton to graduate for him.

One of the things I love best about Cannon Films is the way in which they were always trying to break through into the mainstream by working in tried and tested genres but could never quite get the formula right. They would make big epic sci-fi spectacles but they'd come out as Lifeforce. They would launch an action franchise but it would culminate in Death Wish 3. And while they made a handful of teen movies, Cannon could never come close to touching what was being done by John Hughes. Even when they tried to make Porky's it came out as The Last American Virgin. Making the Grade is no different: it sets itself up as a teen comedy about false identity and then forgets to do much with the false identity. And the comedy.

Rich kid Palmer Woodrow (Dana Olsen) is on his last private school. He's gotten into too much trouble and been expelled to many times for his parents to continue supporting him, so he's got one last chance to prove himself before being cut off for good. Palmer does what anyone would do in his situation: he hires Eddie Keaton, a con artist from Jersey (Judd Nelson), to impersonate him and graduate, for which Eddie will earn $10,000 and a new car and be able to pay back a bookie named Dice (Andrew Dice Clay). When Eddie invades the uppity private school, all hell's gonna break loose! Or not. Mostly not. Things pretty much proceed as normal. 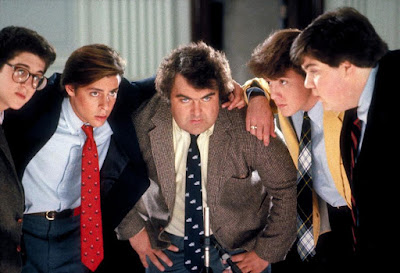 I can't say why for sure, but so many '80s teen comedies focused on characters posing as someone else in order to cheat a system and get what they wanted: Soul Man, Can't Buy Me Love, Just One of the Guys, Nobody's Perfect, etc. Add Making the Grade to that list. The "hook" of the movie might be the most interesting thing about it (unless you're a Dice completist like me and appreciate the opportunity to see that character on screen for the first time), except that it's not developed at all beyond its premise. We see Eddie as a flashy, fast talking hustler wearing an all red suit. Then he gets hired by Palmer and pretty much becomes just like every other student at the prep school. There are a few diversions, like a scene in which Eddie breakdances (correction: Judd Nelson's dance double breakdances), but for the most part he just romances a pretty blonde student (Joanna Lee) and keeps up with the ruse. The comedy beats are assigned to the supporting cast, whether it's the cutaways to Dana Olsen or the other students played by the likes of Dan Schneider, Walter Olkewicz and John Dye.

Such was Cannon's confidence in Making the Grade that they tease a sequel in the closing credits, boasting: "Parker and Eddie will return in Touristas." This is one of the strangest sequel teases ever in film, seeing as Parker and Eddie share all of about three scenes together (by design; they're not supposed to be in the same place at the same time) and generate no real comic chemistry. Dana Olsen is a big part of the problem; not only does he seem far too old to be a convincing private school student, but he comes off as a wet blanket pretending to be the life of the party, Bill Murray-style. There's a reason he spent most of his career as a screenwriter. He wrote The 'Burbs! 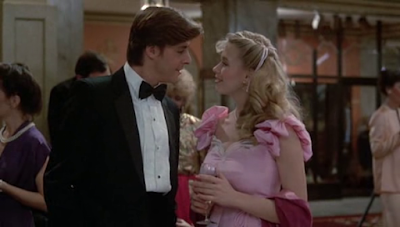 As Cannon movies go, Making the Grade lacks the weird personality that marks the majority of their output. It tries so hard to be mainstream that it strips away everything that makes Cannon so singular, and it finds Judd Nelson far more in St. Elmo's Fire yuppie gear than in wild, nostril-flaring Breakfast Club mode. It's weird that so many comedies -- including those that date long before the 1980s -- use false identity as their main conceit, but Making the Grade never manages to capitalize on even that tried and true formula.