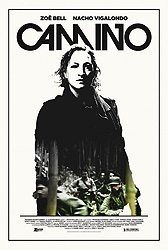 My Girlfriend Zoë Bell gets to rumble in the jungle.

Going into Camino, the new film from director Josh Waller and the latest starring vehicle for My Girlfriend Zoë Bell, I was really hoping this was going to be the movie that gets it right -- the movie she deserves after a career of stunt work, supporting roles in genre movies (Game of Death, Oblivion, Gamer) and the occasional lead (Angel of Death, Mercenaries). Camino reunites Bell with Waller, who previously directed her in the 2014 fight-to-the-death movie Raze. The two movies have a lot in common, and as someone who wasn't all that crazy about Raze that comes as a disappointment.

MGFZB plays award-winning war photographer Avery Taggert (!) who is sent to 1985 Columbia (the movie is set in 1985; she is not a time traveler) to follow a group of missionaries led by Guillermo (played by Nacho Vigalondo, director of Timecrimes and Open Windows). Before you can say "things aren't what they seem," Avery discovers that things aren't what they seem and that these missionaries are actually bad dudes who proceed to spend the rest of the movie hunting her through the jungle and trying to kill her for what she and her camera have seen. 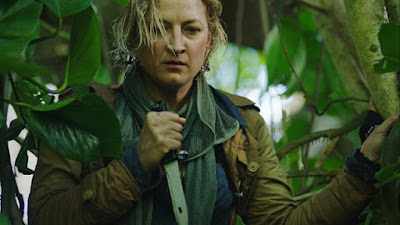 Less an action movie than a survival story, Camino is yet another film in which everyone beats the shit out of MGFZB. In a world in which hugging exists, I do not understand this. The structure is similar to Raze, only instead of fighting in some sort of weird underground room the characters are fighting one after another in the jungle (which is very nicely photographed by Noah Greenberg). At this, Bell is very convincing. She's knows how to fight on screen; even better, she knows how to fight in character on screen. That means that while it's the tiniest bit puzzling how a photographer has such scrapping skills, Bell fights more like someone who is desperate to survive than someone coming out on the offensive. She always authentic, always believable.

Also very entertaining is director-turned-actor Vigalondo, clearly having a great time as bad guy Guillermo. While the role only demands that he be a fairly generic South American soldier bad guy, Vigalondo finds small ways to make him funny and give him human quirks -- just the way he repeats "relax and squeeze" is very amusing. I'm probably grading on a curve somewhat because I'm so tickled at the novelty of the filmmaker playing the film's villain, but he's maybe the only thing that gives the movie any levity at all. Otherwise, it's a pretty grim affair. I guess when your inciting incident is child murder there aren't going to be a lot of laughs to be had. 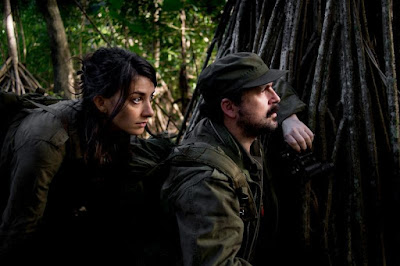 I keep waiting for another filmmaker to really know how to best use Bell. What Quentin Tarantino seems to understand -- both in her starring role in Death Proof and even what was essentially a supporting cameo in The Hateful Eight -- is that Bell is a goddamn luminous presence. She has endless charm and a sweet positivity that cannot be faked. Yes, those things can coexist alongside her kick-your-ass fierceness. But it feels like so many directors and casting agents just see the scowl and her ability to take a punch, overlooking just how much fun she is on screen. Josh Waller doesn't seem to be interested in making those kinds of movies, and while I appreciate that he's giving starring roles to MGFZB I wish it wasn't only in these really serious, gritty action movies. Seeing as she's an executive producer on the movie, she's party to it as well. Maybe these are the kinds of films she's most interested in making. But watching her being forced to suffer and suffer in movies that are totally joyless is like someone throwing a tarp over the sun. Gotta let that thing shine. 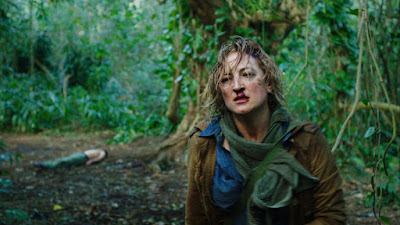 Camino is a fine example of exactly what it wants to be: a straight-faced survival action film set against the Columbian jungle. It is well shot, well directed and the performances are all good. The story is a thin, sure, but even that's not an accident. My reactions to it have everything to do with the movie I want it to be instead of the movie it is. My Girlfriend Zoë Bell has proven in movie after movie that she's got the goods. I'm just waiting for the right film to come along to do right by her and be every bit as good as she is. For now I'll keep waiting.