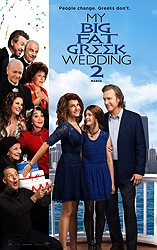 Goodbye credibility. It was nice knowing you.

My Big Fat Greek Wedding 2 is a pleasant, energetic and sweet movie. It’s not nearly as good as the original, but I can’t deny that I enjoyed being in the company of the film’s characters once again. The sequel is basically fan fiction for admirers of the first movie, so if you like the first Greek Wedding you’ll probably be predisposed to thinking this new entry is decent. If you didn’t care for the first one, there’s very little reason for you to watch the second. I saw the movie with my mom and when I looked over at her a couple times while it played she had a grin on her face. As simple as this deduction is, I think I like the movie if for no other reason than that.

The plot in brief: The Portokalos family is back and zanier than ever. But when Toula’s (Nia Vardalos) parents (Michael Constantine and Lainie Kazan) find out they were never officially married, another wedding goes into the works. 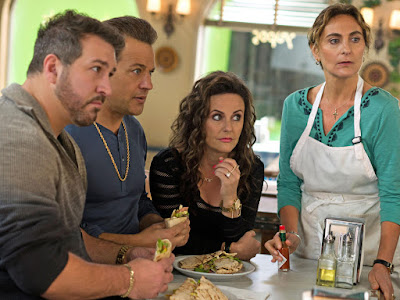 To its credit, My Big Fat Greek Wedding 2 is also better than many comedy sequels (faint praise for sure). It doesn’t feel like the cynical cash-grab it was on paper once you see the actual movie. This is a movie that loves its characters despite still putting them through sitcom scenarios and predicaments. The most clear-cut example of this is that one of the characters is revealed to be gay and at no point does the movie even come close to making jokes about that. It’s a movie that just wants to see happiness for this character and for all its characters. I also liked that one of the film’s couples is revealed to be having some strain on their marriage and the movie takes that situation seriously, usually exemplified by simple (not over-written) dialogue. Its little moments like these within scenes that make me like this sequel even if the set pieces don’t click like they did in the first movie.

But the movie has some problems to be sure. Too much time is spent on cracking jokes at the expense of the family’s great grandmother, who sort of becomes this series’ version of Lurch in The Addams Family movies. The subplot about the second wedding is dumb. It would have made more sense to have the wedding be for the character who is gay or for Toula and Ian’s (John Corbett) daughter – who in this movie is 17 years old despite the original movie coming out 14 years ago. The gags don’t flow as easy as they did the first time out either mainly because the element of surprise is gone. For example, none of the Windex jokes land this time despite the fact that I laughed at almost all of them in the first movie and a subplot about Michael Constantine’s character maybe being related to Alexander the Great doesn’t reap any dividends. I wish the movie was shot in Chicago too, since it takes place there (this one was shot in Toronto). And lastly, the John Stamos cameo makes no sense and adds nothing. It’s as if he just wanted to be in the movie and he’s Greek so the filmmakers shoe-horned him in there. 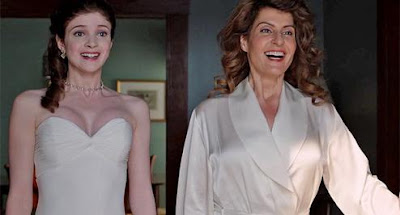 And yet despite those issues I find myself thinking back fondly on the movie a couple of days later. I think there are a couple of reasons for this: 1) I’ve been in a bad mood recently and this was just an amiable time waster that allowed me to forget my troubles for 90 minutes. Sometimes movies are valuable for fulfilling this purpose even if they’re not all-timers and 2) after watching such a dour Batman v. Superman: Dawn of Justice that’s not for fans at all, I’m glad to see a franchise care about its audience and attempt to deliver for them in an earnest way. One other thing I’d like to mention is that I really like the score for the first My Big Fat Greek Wedding and for its sequel. One of my pet peeves usually is the scores used in film comedies, but the ones here (maybe just because they are Greek sounding and atypical to what we usually hear) are pretty appealing. All in all, I give this movie a mild recommendation for fans of the original. It’s entertaining, large-hearted and kind, as well as better than I expected it to be based on its underwhelming trailer.
Posted by Patrick Bromley at 12:00 PM