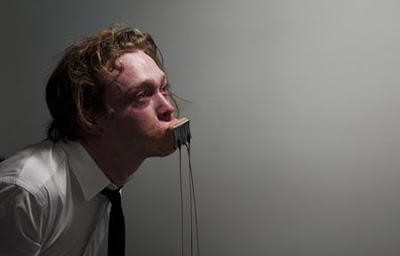 I began this week with a mission. That mission? To watch at least one David Cronenberg movie every day. As to why, I have no f'ing clue...but here I am, finishing a blissful seven-day bender of blood, boobs, flesh, and flesh. And flesh. On this journey, I discovered (definitely late to the game on this one) that Antiviral—a movie I really enjoyed when I saw it a couple of years ago—is directed and written by none other than Papa Cronenberg's son, Brandon Cronenberg. I loved this movie when I saw it. It was weird, beautifully art directed, and simply put: a good time.

After my spiritual awakening this week and a second viewing of mini-Cronenberg's debut film, I have some new feelings. It still holds up as a "good movie" for me in that I wouldn’t cry if I had to rewatch it and I’ll probably continue to recommend it. The latter of which says nothing as I just recommended Dreamcatcher in 100% seriousness.

But...I feel like I’ve just seen the man behind the curtain instead of the Wizard of Oz or something. Like, Brandon builds a really cool universe, influenced largely by his father’s themes and interests, but at the last minute it’s like he gets too excited and wants to show us every single part in hi-def. Ultimately this dilutes the story line (which is so well acted and styled) so much that it kinda ends up being a big “So...What?”

My blood binge has made it impossible to un-see Antiviral as a younger version of Elder Cronenberg’s movies. Like. It’s all David. Granted, the movie is packaged differently: sleeker, more brooding (no humor), and up-to-date (ish) with the collective pop culture mindset. And WOW Caleb Landry Jones. But I don’t know if that’s enough for me. I’ll preface this bit with getting it out of the way that I KNOW it’s unfair to compare the two Cronies but I can’t help it. And I’m going to keep doing it. 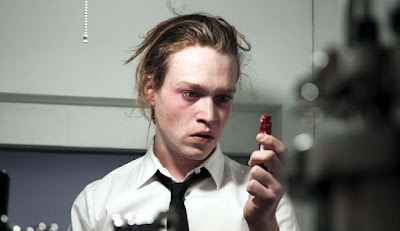 We’re dealing with a lot of the same motifs Papa Cronenberg is known for: penetration, the weird place where pleasure and pain meet, the mechanics of being a human, and Flesh as a driving force of obsession. For the first half of the movie I’m totally on board, and if I work hard enough on choosing what parts of the movie to focus on, I can stay on board. But there comes a point as you’re watching where it’s just like, enough is enough, man. It seems like despite having chosen a minimalist aesthetic as a framework for Antiviral, Brandon ended up oversaturating his film with too many threads and ultimately didn’t know how to sew the whole thing closed.

But, again, perhaps I’m being unfair.

Brandon Cronenberg’s in the movie is obsessed with celebrity. Kind of like us, but more so. What a star’s genitalia must look like, their ailments, their body’s mechanics. The public literally consumes celebrity on a meal by meal, day by day basis. We meet Syd March, an employee at a bougie virus shop, the Lucas Clinic, where patrons can buy microbes that have lived inside the bodies of their favorite celebs and infect themselves. For example, you think Angelina Jolie’s a major babe? Well shoot some of her personal strain of herpes in your mouth and feel like you’ve shared a weekend tryst with the megastar. Yum!

(disclaimer: I have no idea if she does or doesn’t have any illness of any kind.) 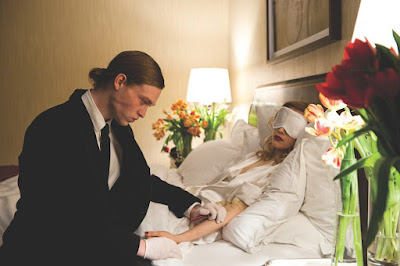 On the side, Syd infects himself with the viruses, collects the infections and breaks their copyright protections to then sell them on the black market. One of the 5,000 themes of the film illustrated in the code-breaking scene is how their scientists have chosen to identify the viruses. Instead of numbers or things that we understand to be mechanical in our world, Cronenberg chose to use faces to identify each strain of disease. Although it’s simple, this is my favorite aspect of the entire film. And I think it’s also why I refuse to kick this movie out of my good graces. Yet. The viruses become identities, able to manipulate the infected and extend from physically altering to psychologically. It’s this one idea of viruses as physical entities that I LOVE and wanted dialed up to 11.

We’re lead to believe that Syd can see through the veil of celebrity-obsessed mania. He doesn’t eat the celebrity-meat, he has a very rehearsed selling pitch for his clients, and he seems to do things based on his own agenda, unaffected by the craze that surrounds him. But as he falls deeper down the rabbit hole of black market virus hocking, we begin to see him change both physically and mentally. Cronenberg doesn’t really explain why any of this is happening at all, which I don’t know if we’re supposed to care about, but I find it unlikely that unless Syd had some serious side issue he needed to take care of he would participate in both legal and illegal virus distribution. Anyway. He ends up infecting himself with some Serious Shit and we are subjected to lecture after lecture of some major plotsplaining by various characters. Syd becomes obsessed with the celebrity whose viruses he’s been carrying and selling. And this is where the movie FELL APART for me this second viewing. Again, Brandon Cronenberg got too hung up on explaining every detail of a movie that he obviously loved, grew, and nurtured that he loses us entirely. It’s like 80% there. So. Close. 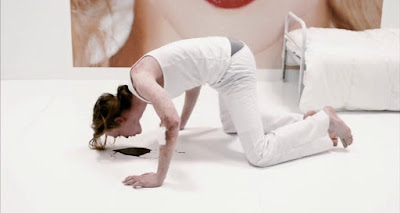 I still recommend watching the movie, because it’s got a lot of really cool ideas, just like…way too many of them. And again. Caleb Landry Jones. I’m still fanning myself, you guys.

It’s just funny how you can think you love a movie, but after a rewatch and a really long look in the mirror, you can admit that maybe it’s not that great. So that’s the moral of the story. If you love something let it go, or wait til it catches a disease and inject yourself with it. Then you just might fall in love with the director’s father.