Off the Shelf: Fatal Beauty (Blu-ray) 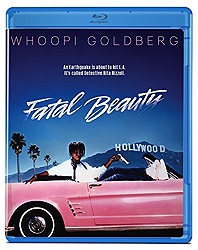 An earthquake is about to hit L.A. It's called Detective Rita Rizzoli.

I wrote a #HeavyAction piece about the 1987 cop movie Fatal Beauty last August after seeing the movie for the first time in years, wherein I found it to be an uneven film that's split between being a straightforward action effort and a Whoopi Goldberg comedy. It's much better at being the first than it is at the second, to the point that I would encourage any fans of '80s action and/or cop movies (I am a fan of both) seek it out. This one's underrated.

A review of the plot: Goldberg plays Detective Rita Rizzoli, a Los Angeles narcotics cop fighting a war against a new street drug called "Fatal Beauty," a highly potent form of cocaine that's killing the people who use it. While she tracks down the criminals who stole the supply of the drug (led by an unhinged Brad Dourif), she befriends Mike Marshak (Sam Elliott), the bodyguard of a potential drug lord who doesn't seem to realize exactly what it is he's involved with. Eventually, the two of them team up to bring down Fatal Beauty and anyone selling it. And by "bring down" I mean "shoot and kill." 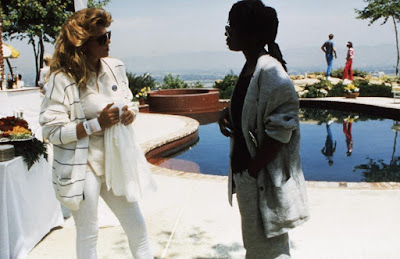 The movie was directed by the great Tom Holland between Fright Night and Child's Play as a way of showcasing his ability to make something with mainstream commercial appeal outside of the horror genre. But because Holland still leans towards his genre movie sensibilities, Fatal Beauty is an action movie with the energy, the nastiness and the bloody violence of a horror film, making it all the more jarring when it pauses for a comic beat or to function as a vehicle for Whoopi Goldberg to play dress up. While I could do without the latter, the former stuff really works in the way that I like my '80s action, with Holland proving to be adept at staging the set pieces. While it lacks much of the humanity he talks a lot about infusing into his work (including on our very own podcast!), Holland does see to it that some strong character beats make it into the movie, including a terrific monologue from Goldberg about her past as a drug user. If you're concerned about taking Whoopi Goldberg seriously as an action star, these are the moments that ought to convince you otherwise.

But then there's the unnecessary stuff, like the forced comic beats or the pointless inclusion of Sam Elliott's character. That's why I can't recommend Fatal Beauty without any qualifications; while I like a lot of it, there's a certain amount of material in the movie I have to overlook. It also makes this a movie for no one back in 1987; Whoopi Goldberg fans looking for a starring vehicle had to be turned off by the seriousness of a lot of the movie and the nasty violence, while action movie fans wrote it off as a Whoopi Goldberg comedy and never gave it a chance. Time has been good to it. Free of its cultural context, the movie can now be seen as that time Tom Holland made an action film and Whoopi Goldberg got to shoot a bunch of people on screen. 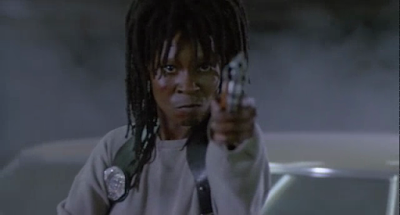 Fans of the movie such as myself should be happy about it getting a Blu-ray release from Olive Films. It means I'll be able to retire my DVD copy, which came as part of a double feature with the great Running Scared (which I already have on Blu-ray and don't need a second copy of) in a non-anamorphic transfer that's completely outdated. I'm glad to finally be able to watch it in its proper format. This is a movie that I think is worthy of rediscovery -- not an action classic, but a better and harder-edged cop movie than it's credited with being. Pick up the Blu-ray and tell me I'm wrong.