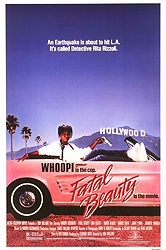 The director of Fright Night tries something different and Whoopi Goldberg kills a lot of people.

At this point, it is the stuff of Hollywood legend: the original screenplay for Beverly Hills Cop was written as a starring vehicle for Sylvester Stallone. It's hard to fathom that now, as both the film and its eventual star Eddie Murphy have become so iconic in our popular culture, but we were two weeks away from the Stallone version of Cop. He walked just before filming, though, and the producers decided to push it back towards comedy by hiring Murphy to take his place -- a choice that proved so successful that Cop wound up the top-grossing movie of 1984 (it even beat out Ghostbusters, for crying out loud). Stallone took his ideas for a more action-oriented version of the film and turned them into Cobra one year later, meaning we now live in a world with both the funny version of Cop and the trashier, more violent alternate reality version made by Stallone.

But there is a third movie that exists precisely at the intersection of the two films: 1987's Fatal Beauty. It takes the basic gimmick of Beverly Hills Cop -- drop a fast-talking comedian into a police procedural -- and adds the gratuitous bloodshed and mean-spiritedness of Cobra for a combination that's not quite action-comedy, but also not quite comedy. It's more of a straight action movie in which Whoopi Goldberg just happens to dress up in funny costumes at times. 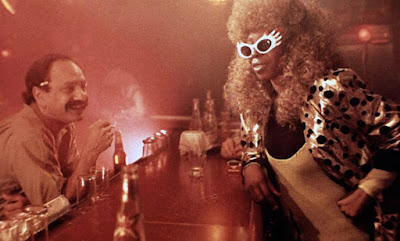 Goldberg plays Detective Rita Rizzoli, a Los Angeles narcotics cop fighting a war against a new street drug called "Fatal Beauty," a highly potent form of cocaine that's killing the people who use it. While she tracks down the criminals who stole the supply of the drug (led by an unhinged Brad Dourif), she befriends Mike Marshak (Sam Elliott), the bodyguard of a potential drug lord who doesn't seem to realize exactly what it is he's involved with. Eventually, the two of them team up to bring down Fatal Beauty and anyone selling it. And by "bring down" I mean "shoot and kill."

Yes, Fatal Beauty is incredibly violent and bloody. A lot of people get shot. Interestingly enough, director Tom Holland's background was in horror films  -- he wrote The Beast Within and Psycho II and directed both Fright Night and Child's Play -- but his horror movies were never all that violent. His action movie is three times bloodier than anything with which he was previously involved. It's very much a part of the squib-heavy '80s, when action movies were rated R and violence was wet and messy, not the bloodless, consequence-free stuff of today's PG-13 world. Fatal Beauty is my kind of slick, violent trash. That may sound like a pejorative, but the combination of any two of those qualities makes a movie a must-see for me.

The trashiness is embraced from the opening scenes, when some generic criminal scumbag types scream hateful insults at Rita regarding both her gender and her race. '80s gotta '80s. What's great about Whoopi Goldberg -- particularly the Whoopi Goldberg of this period, when she still felt streetwise and unpredictable -- is that she's tough enough to punch back. One might think she's ill-suited to headline her own action movie, but she's got the goods. She's got the right kind of fuck-you attitude to play an '80s cop, and when she reveals that she's got a history with drugs (in a dark and heartbreaking monologue that Goldberg really sells), it informs so much about Rita's attitude towards the people she's busting. But because the producers are clearly chasing that Beverly Hills Cop model (down to hiring Harold Faltermeyer to write the score, which fails to register), Rita's also got a chip on her shoulder about the bourgeoisie, too; in one of the film's most iconic moments (the one that was used to see it back in '87), she knocks a shit-talking, rich white woman through a glass door. She hates the upper class just as much as she hates the criminals. You might say she plays by her own rules. 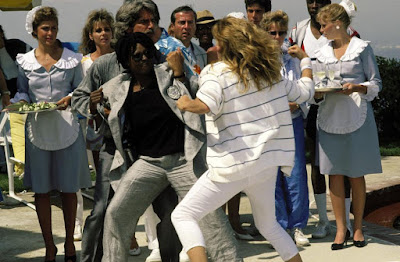 But the casting of Whoopi Goldberg -- who, I repeat, is terrific in the movie -- gives the film something of a personality disorder. The story goes that Fatal Beauty was originally conceived as a vehicle for Cher, but went with Goldberg when Plan A didn't work out. Now, I haven't read the script and can't say how much changed (if any) from the time before Goldberg came on to after she was cast, but it does seem like aspects of the film were reshaped once the comedian got on board. There's a recurring gag in which Rita is shown wearing a series of disguises and adopting different personas, which does nothing for the film except highlight Goldberg's ability to play different characters -- a defining aspect of her stand-up and one-woman shows in the '80s. It feels like the film twists itself into knots to be a vehicle for Whoopi Goldberg, trying its best to serve her comic persona instead of letting her bring her talents to serve the material. Fatal Beauty is at its best when it does the latter.

There's very little about Fatal Beauty that cries out to be a comedy, and what comedy exists is not all that funny. It becomes a movie at war with itself -- one which satisfies neither audience. Anyone checking the movie out because they're fans of Goldberg's comedy will be horrified by the mean-spirited violence, while those who might be interested in it as an action movie might not give it a chance because they think it's another Jumpin' Jack Flash or Burglar or Sister Act 2: Back in the Habit or Theodore Rex. That's why columns like this exist: to tell you to watch Whoopi Goldberg movies you might not otherwise watch. 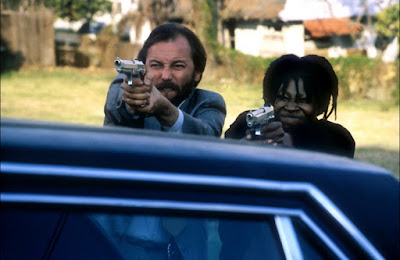 The Sam Elliott stuff makes very little sense: not his character, nor his participation in the movie. Mike Marshak seems forced into the movie because someone got cold feet that Whoopi Goldberg could carry it on her own and needed a man to help out. It's wrongheaded and it's bullshit. While I might usually be in favor of the way Fatal Beauty inverts traditional archetypes and Elliott and his mustache the show up/stand around role typically reserved for women in these kinds of movies, he's given more weight and competence than is ever afforded to his female sidekick counterparts. The only other explanation is that he's on hand to act as the love interest, but he and Goldberg generate so little romantic chemistry that an attempt to suggest a relationship between them is an enormous miscalculation at best. 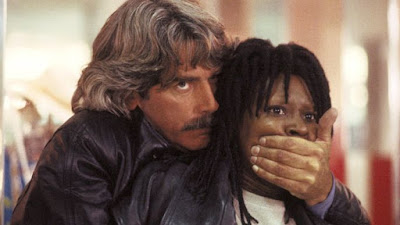 Director Tom Holland reportedly took on Fatal Beauty as a way of demonstrating he could branch out from the horror genre, though the experiment was largely unsuccessful. The film grossed just $12 million and received mostly negative reviews from critics. Worse, though, is that it didn't allow Holland to do what he does best: character. Holland's previous genre movies were great at offering wonderfully realized characters and exploring their humanity, but that may be because he wrote (or, in some cases, re-wrote) the scripts. The screenplay for Fatal Beauty is credited to Hilary Henkin (Road House) and Dean Reisner, a writer on many of Clint Eastwood's '70s efforts including the original Dirty Harry. So at least the movie comes by its violent nastiness honestly. As a for-hire director, Holland stages surprisingly effective action; the script is a muddled mess of motivations and machinations, but it works in the moment because Holland keeps it moving. The action is orchestrated with the flash and confidence of a Renny Harlin -- a comparison that, in this instance, is intended as favorable.

Unfortunately, the only DVD that exists of the underrated Fatal Beauty is the original non-anamorphic release from MGM. My copy is actually included as part of a double feature with 1986's Running Scared. I understand the thinking, as that, too, is a cop movie starring a comedian playing against type (Billy Crystal). But Running Scared is much more successful as an action comedy because it finds the right balance between both. Fatal Beauty works as an action movie, but not as well as a comedy...no matter how many wigs Whoopi Goldberg wears. Between Kino Lorber's "Studio Classics" line and Shout! Factory -- both companies that have been raiding MGM's back catalogue and putting titles out on Blu-ray -- maybe we'll get a Blu-ray release of Fatal Beauty before physical media takes its last gasps. An HD version is currently available on iTunes. Check it out if you've never seen it. The movie doesn't get mentioned much in discussions of '80s cop movies, but it ought to be. If only they'd have ditched the silly wigs and allowed it to be a straight action film.