So much has been written about this film… what more is there to say? 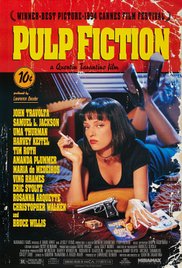 Pulp Fiction took the movie world by storm when it was first released in 1994. Part and parcel of the film’s fame and growing cult was the myth of Quentin Tarantino, the video store clerk who became his generation’s greatest voice and filmmaker. Reservoir Dogs had been an impressive debut and a big indie success, but no one was prepared for the cultural juggernaut that was Pulp Fiction.

One of the many things Pulp Fiction should take credit for is its use of achronology. I still remember the massive audience confusion that ensued (MASSIVE SPOILER FOR PULP FICTION AHEAD—but seriously, if you haven’t already seen it, the Pope of Film assigns you five “Hail Marties” and a reading from Ezekiel 25 as penance) when the John Travolta character is shot dead and then reappears a few scenes later. Audiences were not used to that sort of thing in 1994. Dare I say, audiences are not used to that sort of thing even now. Roger Avery has said that Danny DeVito’s Jersey Films optioned the script and actually got it green lit at Columbia Tri-Star, but the film was eventually put in turnaround. TriStar's objections included the script’s violence and unconventional structure. According to Avery, the studio said, “This is the worst thing ever written. It makes no sense. Someone's dead and then they're alive. It's too long, violent, and un-filmable…”

I love films that dare to shake the bounds of chronology and tell their stories the ways the filmmakers best see fit. I wish more Hollywood films would do this. No, flashbacks do not count. 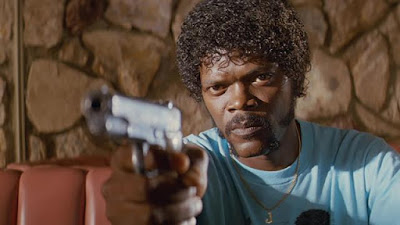 The Plot in Brief: Two young lovers (Amanda Plummer and Tim Roth) rob a diner. Two enforcers for a local mob figure (John Travolta and Samuel L. Jackson) retrieve a briefcase. One of the enforcers escorts the mob boss’s wife (Uma Thurman) to a local restaurant. A boxer (Bruce Willis) primed to throw a prizefight decides to win the fight instead. The boxer needs to retrieve his wristwatch. The two enforcers enlist the aid of some friends (Quentin Tarantino and Harvey Keitel) to help them clean a car. All hell breaks loose.

One thing I have never read before regarding Pulp Fiction is the debt it may owe to Bollywood cinema. Think about it. Tarantino is famous for the “film school education” he gave himself by watching all kinds of films while working in a video store. Bollywood films are famous for providing their audiences with “a whole evening’s entertainment,” often being a mix of style and genres within the same picture. Pulp Fiction provides its audience with a heist film (the “Pumpkin and Honey Bunny” sequences), a boxing picture (the “Butch” section), a gangster film (the “Winston Wolf” vignette), a romantic comedy (“Vincent and Mia”), a horror film (the famous syringe sequence), and even a musical (the now-iconic scene in which John Travolta and Uma Thurman DANCE!). The Pope thinks he is on to something here. Of course, it could just be Uber-buff wunderkind Tarantino placing all available film genres into a blender and hitting the button labeled “frappe.” I invite your thoughts.

I remember when Tarantino and co-writer Roger Avery took to the stage at the Academy Awards to accept their Oscar for Best Screenplay. Avery went up to the microphone and said, “I need to pee.” The audience that night thought he was being immature; he was actually quoting Best Picture Winner (bleccccccch) Forrest Gump. We have spoken endlessly on this website of the Academy’s numerous, howling mistakes. With the possible exception of Driving Miss Daisy winning the Oscar in 1989 over the not-even-nominated Do The Right Thing, could there be a more perfect example of the Academy’s short sightedness than Gump winning the 1994 Oscar over Pulp Fiction? You know, Pulp Fiction, the film that changed filmmaking?

One quibble: Am I the only one NOT in love with Christopher Walken’s wristwatch monologue? I think it is the only stumble in the film. While the monologue is well written and well acted—and very Walken-esque—I think the whole sequence is a little up its own ass. (Pun intended! BOOM!) The watch in question functions as a Hitchcockian “Macguffin,” providing the character Butch with the motivation to venture from his safe haven. Once we discover that the watch belonged to his late father, does that not provide us with reason enough to justify Butch’s subsequent decisions? The sequence is dead weight and stops the picture cold.

The film also inspired lesser, wanna-be independent films cut from the same cloth: Destiny Turns on the Radio, Things To Do In Denver When You’re Dead, 2 Days in the Valley, and 8 Heads in a Duffel Bag are just four of the films that obviously owe their provenance to Tarantino’s singular talent. 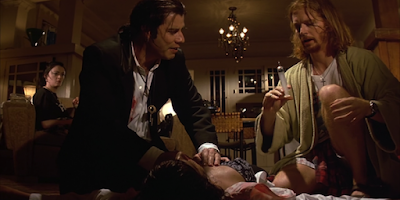 At this point, dear readers may be asking themselves, “Why, oh wise and holy Pope, if Pulp Fiction is so goddamned great, is it only #44 on the Cinema Bestius list? Pardon our temerity for asking, Your Sprocket Holiness, but why?”

…Because, pilgrims, in the weeks ahead, I intend to discuss 43 films that are even greater than Pulp Fiction. Stay tuned.