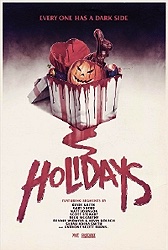 Maybe you should celebrate without me.

The new horror anthology Holidays is, in the long history of horror anthologies, very uneven. Consisting of eight separate shorts each revolving around a different holiday and written and directed by established and up-and-coming voices in indie horror (and Kevin Smith, whose participation gives the movie its marquee value), the movie boasts many of the same strengths and weaknesses faced by the majority of anthologies that precede it: the quality control is all over the place and there's nothing that really hangs the shorts together save for the overriding gimmick, but hardly any of the segments overstay their welcome. Even those that don't work all that well are pretty short and then it's on to the next segment and a blank slate. 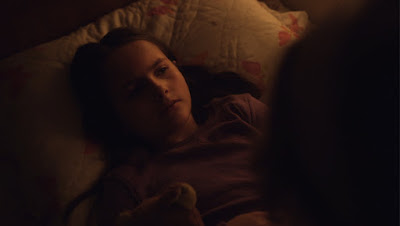 Beginning with "Valentine's Day," a tale of unrequited teenage love from the Starry Eyes writing/directing team of Kevin Kölsch and Dennis Widmyer and wrapping up with "New Year's Eve," in which The Green Inferno's Lorenza Izzo goes on a blind date for Some Kind of Hate director Adam Egypt Mortimer (with contributions from Gary Shore [Dracula Untold], Sarah Adina Smith [The Midnight Swim] and Nicholas McCarthy [At the Devil's Door], among others in between), Holidays in an anthology almost in the ABCs of Death tradition. The segments are shorter and there are fewer of them, but they're connected only by the hook and each end with a title card announcing which filmmaker was responsible -- though if you're as familiar with current indie horror as I am, you can pretty much tell who made what even before the credit comes up on screen. I don't hold the lack of a wraparound segment against the movie -- Tales of Halloween didn't have one last year and I enjoyed that movie a lot -- but the absence of some sort of connective tissue really does make you realize just how much you miss it when it's not there. Like with ToH, the final short ends and the movie cuts to credits, going out with more of a whimper than a bang.

There are a few segments that more or less work. I like "New Year's Eve," the piece that ends of the film. Smith's "Mother's Day" is unnerving and actually says something, while Anthony Scott Burns' "Father's Day" (in which a young woman played by Jocelin Donahue follows a recording of her dad's voice, trying to find him after many years) is filled with dread and actually manages to create an incredibly sympathetic character in a short amount of time. If there is a drawback to all three contributions, it's in the O. Henry twist punchline that provides a button not just for these two shorts but practically all of them. I don't mind the idea of a clear tag -- it sometimes helps in short-form storytelling like this -- but in almost every case, the punchline is either easily telegraphed or completely airless. If you're going to go for the big finish, you really can't whiff it. 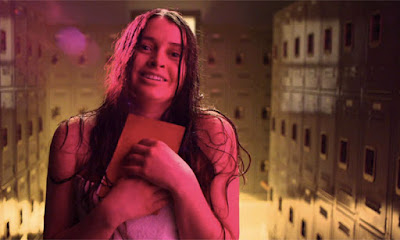 There's only one segment in the movie that I think really doesn't work; not surprisingly, it's from the filmmaker not necessarily known for doing horror (though he was once known for his witty dialogue, which doesn't explain why the dialogue in "Halloween" is easily the worst in the film). Every other contribution has at least a moment, an image or an idea in it that justifies its presence in the anthology. In the case of "Easter," it's a monster design. In "Valentine's Day," it's in the beauty of the photography and one masterful character moment in which someone who has previously been nothing but awful reverts to being nice when her bluff is called; it's one of the most honest and realistic portrayals of teenage interaction I've seen in a movie in a long time. In "St. Patrick's Day," it's writer/director Gary Shore's total willingness to go crazy and make a short that is 100% its own thing, for better and for worse. There's nothing else like it in the movie. Possibly any movie. 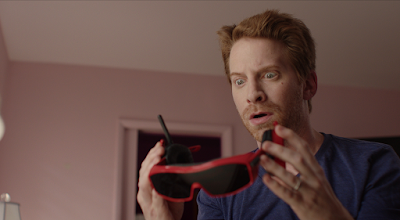 Sadly, it never adds up to much. Holidays is entertaining enough in the moment, but too spotty to cohere into a horror anthology that can stand alongside the best examples of the subgenre. Again, the format is such and there's so much talent involved that it all goes down easy, even while it lacks the ambition and consistency of quality of something like Southbound from earlier this year. At its best, it's a lot of fun and tries really hard to entertain. At its worst, it feels phoned in. The truth of the matter is the the majority of the film lies somewhere in the middle. It can be enjoyable, but also incredibly frustrating. Just like real-life holidays, I guess.

Holidays is currently available for rent and purchase on VOD and iTunes.