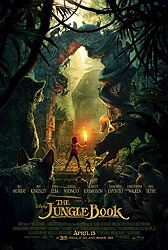 As the live-action adaptations of classic Disney animated films go, Jon Favreau's The Jungle Book is pretty good -- miles ahead of junk like Alice in Wonderland and Maleficent and maybe about as good as Kenneth Branagh's Cinderella. The filmmakers really accomplished translating an animated movie into live action. So...now what?

This is the question going through my mind as I think back on The Jungle Book. It's a completely competent movie and a technical marvel; the computer created animal characters and environments are amazingly photorealistic. Where once it might have seemed impossible to bring the Jungle Book cartoon movie into the "real" world of live action, modern technology has come far enough for that to happen. I'm just not sure why I ever need to revisit this take when the animated version still exists. I'm not trying to throw shade at Favreau's movie, necessarily, except to say that I can admire its technique while still being almost totally unmoved by any of it. The adventure never thrilled me, the emotional stakes never impactful enough for me to care. I'm stuck for much to say beyond "Yep, that's The Jungle Book." 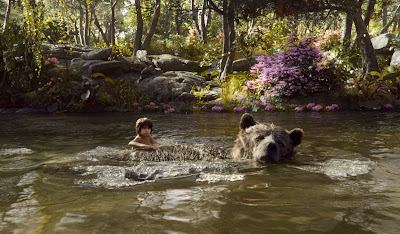 You probably know the story by now. Based on Rudyard Kipling's writing, The Jungle Book stars child actor Neel Sethi as Mowgli, a young boy who is orphaned in the jungle, discovered by the panther Bagheera (Ben Kingsley) and given to the wolves Akela (Giancarlo Esposito) and Raksha (Lupita Nyong'o) to be raised. When the vicious tiger Shere Khan (Idris Elba) threatens to break the jungle truce and begin killing animals if Mowgli is not handed over, the boy strikes out on his own and befriends a lazy bear named Baloo (Bill Murray).

There are other sequences from the 1967 animated feature (about which Heath Holland just wrote a great piece) you probably remember as being part of The Jungle Book. Fear not. Most of them are represented as well. The giant snake Kaa (Scarlett Johansson) makes an appearance, hypnotizing Mowgli and providing all the necessary backstory for Mowgli via flashback. The snake's song, "Trust in Me," has been cut out; you'll hear Johansson sing it over the closing credits. The giant orangutan King Louie (Christopher Walken) shows up to sing "I Wanna Be Like You" and act very Walken-esque; if the actor didn't provide a motion capture performance for the digital artists, they certainly did their best to capture his essence in monkey form. I'd accuse Favreau's take on The Jungle Book of being too episodic, but he's following a very clear template. Characters show up and events take place because that's what happened in the animated version. 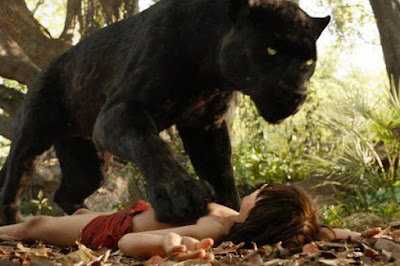 The great irony here is that I'm referring to this Jungle Book as being the "live action" version, but that really only applies to Neel Sethi's performance as Mowgli. Everything else in the movie is just as animated as the '67 film; the difference here is that Favreau and company want to give the illusion that it's all real and the original movie was open about being a cartoon. As incredible as the effects are (and you can shit on Avatar all you like, but you have James Cameron to thank for this), very often it's obvious that Sethi is not interacting with a real environment. There's a halo of light around him that gives it away just as it does any time a performer is acting on a soundstage or green screen; natural light interacts with the human form differently and hasn't really been captured yet on a computer. My understanding is that this is a choice Favreau made for the purposes of shooting in 3D, and I have heard the 3D experience of the movie is very, very good. Having seen it in 2D, I cannot comment except to say that maybe I would have enjoyed the movie more in a different format.

Favreau also walks a strange line between trying to make this the "real life" version of The Jungle Book -- except for, you know, the talking animals -- and just redoing the previous Disney take. This inability to fully commit one way or the other leads to only two of the original musical numbers appearing, "Bare Necessities" and "I Wanna Be Like You." The effect is somewhat jarring, as it's not a world in which characters really break into song and yet two of them do (Baloo's song, "Bare Necessities," is explained better of the two). It's the kind of thing where there needed to be either more songs or fewer. The most significant change from the 1967 film to the live action update is in the ending. I won't spoil what that is, but suffice it to say that the new movie is left more open ended in the interest of future sequels, no doubt. And with a $100+ domestic opening weekend, expect to be hearing about a sequel sooner rather than later. 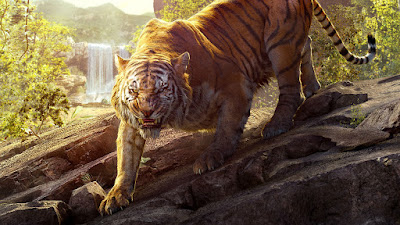 Obviously I don't want to poop on anyone's enjoyment of The Jungle Book, because it's crowd pleasing and at least on a technical level represents true movie magic. It's just not a film with which I ever connected on an emotional level. Favreau's heart is in the right place and the computer effects are genuinely awe-inspiring, but if Disney is going to continue to remake their beloved animated films into live action efforts, my hope is that they aren't such one-to-one copies. I don't want another off-the-reservation bastardization like Alice in Wonderland, but I also know that Favreau has the talent and the resources to have made a movie that stood as its own thing more than this one does.
Posted by Patrick Bromley at 5:00 AM