The real quest for the Holy Grail is finding a great King Arthur movie.

The legend of King Arthur goes back even further than Robin Hood and has been around for 1500 years. It makes total sense that there have been a ton of movies about his heroic deeds and the triumphs and failures of his knights of the round table. On the literature side of things, we have a handful of stories and books about the savior of the Britons that are accepted as being definitive. Unfortunately, there is no definitive King Arthur movie. Here’s my take on some of the more memorable versions of the story.

Monty Python and the Holy Grail

I almost feel like I’m cheating by including this on my list, but it IS a story about King Arthur, regardless of whether or not the Arthur of legend rode around on coconuts banged together by Patsy. Because the Monty Python troupe consists of a bunch of highly-educated geniuses, they understand the story of King Arthur well enough to lampoon it in their trademark style, meaning they take both the high and the low road. We get jokes about poop, a killer rabbit, and the knights who say “ni,” but we also get the social commentary of Dennis the Constitutional Peasant and the violence inherent in the system. Monty Python and the Holy Grail is such a silly movie, but silly in the way that can only be achieved by a group of really smart people. It some ways, it’s the most loving and affectionate of all the adaptations of the story because it embraces the fun of it all. 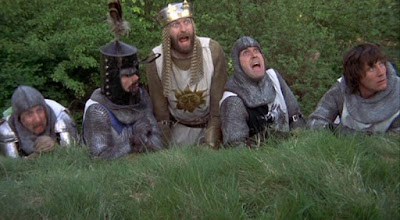 The Sword in the Stone

Based on the first of T.H. White’s stories which comprise his sprawling literary work The Once and Future King, Disney’s approach to the legend is a real mixed bag. It’s cute, sweet, and funny, Merlin is awesome, and the animation is lavish. It’s great to see knights, jousts, and medieval derring-do in cartoon form, but I’ve always been bummed that the story stops just when things are getting good. It doesn’t even cover a third of the material from White’s classic book, leaving so much of the story on the table. And while it’s classic Disney and therefore awesome (to me, anyway), it’s hard not to think that this could have and should have been so much more.

The first movie on this list to really approach some of the complicated themes of the King Arthur legend is also the first one to really throw a lot of the legend out the window in favor of Hollywood romance. Richard Gere is Lancelot, Arthur’s most prized knight, and Julia Ormond is Guinevere, Arthur’s wife. Sean Connery plays Arthur like a boss, bringing the mix of gravitas and spectacle that audiences expect from him. The romance is torrid and steamy, the action satisfying. Unfortunately, they completely rewrite the story, eschewing almost all of the elements that have made the stories so interesting for the past millennia and a half. Gone is all the magic that surrounds the story, including the mystical sword and Merlin; gone is the multi-generational familial drama that seems to haunt Arthur. The ending seems grossly twisted to allow for a happy ending that the story doesn’t merit and that is in total contrast to the moral of the story. In an effort to be taken seriously, First Knight almost veers completely into sentimental melodrama with none of the consequence. The movie has problems that I can’t even begin to identify. I just know that every time I watch it, I go in wanting to love it. I never do. 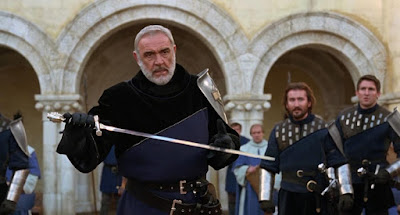 I have a huge weak spot for this version of the story. Just like Ridley Scott’s Robin Hood, Antoine Fuqua’s film boasts that it’s based on newly-discovered historical information about the “real” King Arthur, and just like Ridley Scott’s movie, it’s really not. There is no new historical evidence, but there is the suggestion that the hero may date back to the rule of the Roman Empire. That’s a new setting for this mythical tale, and allows us to approach this story with completely new eyes. Part of what I think really works about the movie is the casting: Clive Owen is Arthur, Ioan Gruffudd is Lancelot, and Keira Knightley is Guinevere. Though this movie also rewrites the legend, I cut it a ton of slack because most of it works.

Like First Knight, this film also attempts to be as realistic as possible, but it just seems to work better here. The battle scenes are grand in scale and the violence is a gritty as hacking at people with swords should be. There is a longer, unrated director’s cut that significantly ups the violence and adult themes. I’ve written about how I’m changing my opinion on violence just for the sake of violence, but the fact is that the longer, more graphic cut makes for a much better movie and totally changes the meaning of certain scenes. Also, Kiera Knightley’s Guinevere is practically a superhero in this movie, holding her own in combat and going after what she wants. She’s a strong female character, rather than a shrinking violet that boys must fight for. That’s progress for a hack ‘n slash movie like this. Even though this version strays pretty far from the traditional legend, I like what it offers. 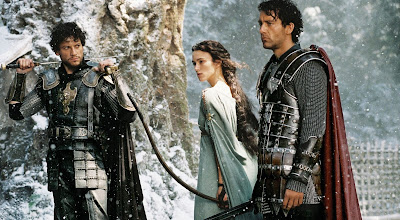 This is the gold standard by which I judge all adaptations of the Camelot legend. John Boorman’s sweeping story starts before Arthur is even conceived and ends after he has departed this world, sparing us very little in between. Boorman was EXTREMELY faithful to the legend, drawing on both T H. White’s book as well as Sir Thomas Malory’s Le Morte d’Arthur as the blueprint for the screenplay that he co-wrote. My criticism of Excalibur it’s that it’s an exhausting film, and one that is far too crammed with plot for one movie. Of course, that quality is also the main thing that this version has going for it. It’s one of those real gems from the early 1980s, but it’s too inaccessible for a mainstream audience to ever be a major hit. This is a near-literal transition of the story to screen, filled with battles, quests, trickery, failures, and redemption. Nigel Terry is a good fit as Arthur, and we get pre-fame performances from Liam Neeson and Patrick Stewart. Nicol Williamson is a great Merlin, and Helen Mirren is fantastically menacing as Morgana Le Fay, Merlin’s pupil-turned-nemesis. Another thing that I dig about Excalibur is that all the magic is ambiguous. Some of it seems like parlor tricks, but some if it seems like it could be legit. The movie doesn’t let you in on any secrets, and let’s you decide for yourself if Merlin and Le Fay are really sorcerers or if they’re just masters at sleight-of-hand.

Undeniably the most awkward scene in the movie comes near the beginning when we see Arthur’s conception as his father knocks boots with a duke’s smokin’ hot wife. It’s a full-on sex fest complete with nudity and simulated thrusting. The weird part comes when you find out that the woman in the scene in John Boorman’s daughter. I used to think this must have been a really uncomfortable day of shooting for daddy and daughter, but now I just feel bad for the guy caught in the middle of this Greek tragedy. “Put my hand where? Do I have to?” 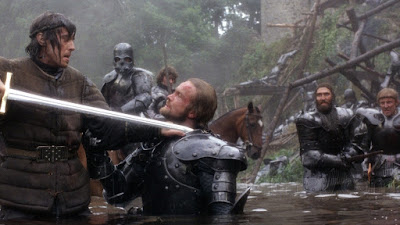 I can’t mention Excalibur without discussing how well it uses classical music and the opera of composer Richard Wagner. Excalibur wants to be epic. By using Wagner’s “O Fortuna,” it totally is. This music has ended up in everything from video games to commercials for chocolate, but it just fits so well when paired with one of our oldest and most beloved legends. It’s impossible to separate the music from the movie. There’s so much good stuff in Excalibur, I should probably dedicate a whole column to it one day. So much of it is so good, but it’s also work to watch it. Plus, I don’t like that the cinematography is diffused, like there is vaseline on the lens, obscuring the clarity of the picture. It definitely has some problems, but most of them come from the pacing and lack of time to fit everything in. Maybe the movie needed another hour to let all this stuff breathe. It probably needed to be a trilogy.

So there you have it, five completely different takes on the Arthurian myth. None of them are a complete success, but they all have merit. Any one of these is worth your time, but none of them quite managed to capture all of the ethereal, mystic qualities that have made the story so entertaining for hundreds of years. Each comes close in their own way, though, with Excalibur coming the closest. I’d like to think that a story as enduring and flexible as that of Arthur lends itself to varied cinematic interpretations and that one day someone will make the absolute be-all, end-all adaptation of the legend not just for our generation, but for the ones after. Just as Arthur has been foretold to someday return when we need him the most, maybe the great King Arthur film is just beyond the horizon. Maybe it’s next year’s Guy Ritchie version. Maybe YOU are the one who will direct a great Arthur movie. Until such a day, I’ll keep my eyes cast in hope upon the misty shores of Avalon.
Posted by Patrick Bromley at 5:00 AM