This film speaks clearly and well about places we only go when we are all alone. 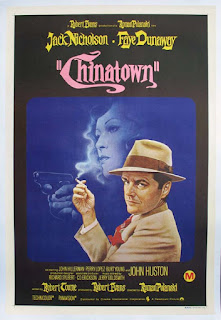 Chinatown may be one of those perfect films. The stars align and we are given the perfect script (twisty, twisty), the perfect director (risky, risky), the perfect cinematographer (picky, picky), and the perfect actors (sexy, sexy). It’s a filmic equation that isn’t successfully completed nearly often enough.

Two years ago, the Pope wrote an extended piece about Chinatown for a previous column, “Drunk on Foolish Pleasures.” Not that the Pope would ever ask for forgiveness, but be aware that the Pope is now going to quote his favorite authority—himself: 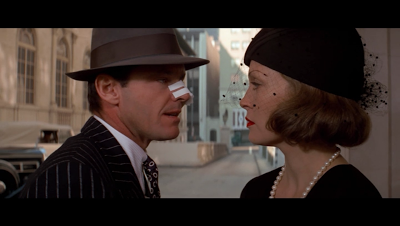 “For decades, Hollywood has considered Robert Towne’s original screenplay for Chinatown one of the best screenplays ever written. It’s been held up as a shining example of the craft; it is still taught in screenwriting classes from sea to shining sea. These accolades are certainly earned; Chinatown’s screenplay is one of the reasons the film is a masterpiece.

“In Chinatown, Robert Towne spins a yarn so potent that one of my most vivid childhood memories involves (this) film I wasn’t allowed to see. One afternoon, my teenaged cousin Joanne stopped by my house and quickly started an animated conversation with my mom. Joanne had just seen Chinatown and loved it SO MUCH that, over the course of the next hour, she summarized the whole plot for my mother, spoilers and all. I was in another room, but heard their entire (one-sided) conversation. Even though I would not actually see Chinatown for another ten years or more, it had been effectively SPOILED for me when I was only 12.

“NOTE: Joanne’s plot summary turned out to be very, very accurate.”
For a briefer plot summary than Joanne’s, plus a bunch of other clearly stated arguments about why this is a terrific movie, go back and read that whole previous column. That should be enough to convince you Chinatown deserves a spot on the Pope’s Top 50 list.

(Somewhere far away, a dog barks.)

Aaaaaaand we’re back. In retrospect, one of the more potent reasons that Chinatown belongs on our list of the Fifty Greatest Films is that, in the forty-two years since its release, it has never been bested. Many filmmakers have tried, but there is simply no film noir released since Chinatown that is a better film noir.

Some thought when Chinatown was originally released that Roman Polanski was setting himself an impossible task: remaking that most 1940s of genres for, if anything, an even more cynical 1970s audience. He succeeded twenty years after the original noir cycle had been played out, and his achievement still stands today.

Chinatown’s Three Miracles: Jack Nicholson’s career-best, magnetic performance in the lead; one of the best original screenplays in Hollywood history, courtesy of Robert Towne; and the acknowledgement that unspeakable evil often comes wrapped in banality and sunshine, a fact that I am sure Roman Polanski knows all too well.