Only Martin Scorsese could have made this film, this way. 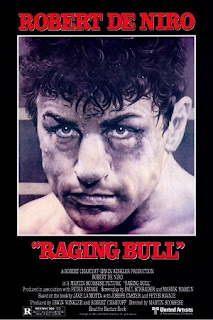 More than Taxi Driver, more than Casino, more than even Goodfellas, Raging Bull is the film that cements Martin Scorsese’s filmmaking style into the public consciousness. The material here feels more personal to Scorsese than the Paul Schrader-scripted Taxi Driver or even the Nicholas Pileggi/Scorsese collaborations Goodfellas and Casino. Five different writers would labor on Raging Bull’s script (including Schrader), but Scorsese here is not only recreating the neighborhood and milieu he grew up in, he’s commenting on his own life at the time he made the film. For more casual filmgoers, it may not be the first movie they think of when they hear Scorsese’s name; but it may be the Scorses-iest.

I see strong parallels between Jake LaMotta’s story of sin, forgiveness, and transcendence and the Martin Scorsese finally emerging from his late-1970s drug abuse hell. Robert De Niro has commented that he was originally attracted to the material because he wanted to perform a stage version of Raging Bull on Broadway at night and shoot the film version during the day with Scorsese directing both. De Niro felt that such intense work was what Scorsese needed to rouse him from his self-imposed stupor. 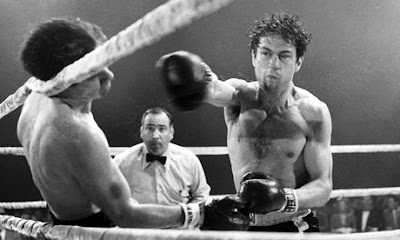 It is hard to convey just how different Raging Bull seemed from every other film released in the summer of 1980. The film was in black and white. The characters were intensely unlikable. The boxing sequences were a world away from those in films like Rocky; for starters, they were more brutal, almost expressionistic. On the whole, it was a much more intense experience than American moviegoers were accustomed to.

The language alone was mind-blowing to the then 18-year-old Pope. If I remember correctly, Raging Bull featured the F-word more times (128) than any motion picture released before it. (Oh, 1980 was a more innocent time!) According to one source, that “record” has since been eclipsed by more than fifty other films, four of which are subsequent Scorsese films: The Departed (237), Goodfellas (246), Casino (422), and current narrative film F-word record holder The Wolf of Wall Street (569). Seeing Raging Bull in the summer of 1980, I had never heard the “king of swearwords” that many times in a movie. My friends and I drove home from the theater almost giddy with it, peppering our conversation with “fuck” as a noun, verb, adjective, and interjection. We even used it incorrectly as a preposition! 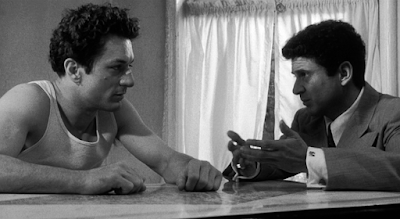 The Plot In Brief: Jake La Motta (Robert De Niro) is a promising middleweight boxer in 1941. His manager and sparring partner is his brother Joey (Joe Pesci). Though he is already married, Jake pursues a relationship with a 15-year-old neighborhood girl, Vickie (Cathy Moriarty) and eventually marries her.

As a boxer, Jake’s key talent is being able to withstand more punishment than his opponents; better at taking a punch than defending himself, he wins by eventually exhausting his opponents in the ring. Jake faces Sugar Ray Robinson in two famous bouts and eventually earns a shot at the title. His fortunes turn, as fortunes will, and he eventually alienates both his brother and his wife, who divorces him. His boxing days over, Jake puts on weight, drinks to excess, and ends up in prison; after his release, he struggles to redeem himself. At the end of the film, we see him backstage at “An Evening With Jake La Motta” rehearsing Marlon Brando’s famous “I coulda been a contender” monologue from On The Waterfront.

In short, Raging Bull is about an awful human being who does mostly awful things. His job is beating people up. His relationships are marked by anger, suspicion, and violence. De Niro’s Jake La Motta is an alcoholic, a rage-aholic, and at the end of the film suffers from morbid obesity. Yet Scorsese is such a gifted filmmaker he turns this frankly repulsive story into a cautionary tale for the late twentieth century. If Jake La Motta can be “resurrected,” maybe there is a chance at redemption for the rest of us.

After all, we’re not so bad. We love Scorsese movies.

Much has been made of Raging Bull’s evocative black-and-white cinematography. At the time, Scorsese was mourning the loss of thousands of color film prints—it had been discovered that Eastman Kodak had manufactured faulty safety stock during the 1960s and ’70s. (The print of The Birds that we routinely screened in my college film classes was a victim of this tragedy, and I remember being blown away when I finally saw the film’s real colors in a restored print that ran on TCM.) Scorsese wanted to film Raging Bull in black-and-white partially to protest the Kodak revelation, but also to solve a problem of perception: Scorsese would be recreating prizefights from the 1950s, and moviegoers’ only memories of prizefights from that era (era) were of black-and-white telecasts and newsreels. 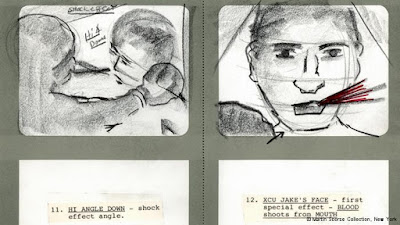 The late, lamented, and out-of-print Criterion Collection laserdisc of Raging Bull (which I still proudly own because I secretly believe laserdisc will one day stage a huge comeback—right after Blu-ray 4K) featured a gallery of Scorsese’s hand-drawn storyboard panels. I used to pore over these and be reminded that Scorsese wanted every fight sequence to look different and have a different evocative tone, mirroring that particular stage in LaMotta’s life and career. That Scorsese succeeded is unquestionable; the fight sequences are among the film’s most iconic and best-remembered.

Raging Bull’s Three Miracles: the colorful, intense, method acting of De Niro, Pesci, and Moriarty; Michael Chapman’s beautiful and evocative cinematography; and the making of the film itself, which sees Scorsese end his two-year addiction/career slump and use the restorative power of art to exorcise some personal demons. It is not for nothing that the film ends with the following Bible verse (John IX, 24–26):

So, for the second time, [the Pharisees]
summoned the man who had been blind and said:
"Speak the truth before God.
We know this fellow is a sinner."
"Whether or not he is a sinner, I do not know,"
the man replied.
"All I know is this:
Once I was blind and now I can see."