“From the author of Jurassic Park and the director of Die Hard.”

Despite an interesting history, The 13th Warrior has never had a very good reputation. The 1999 film stars Antonio Banderas as a Middle Eastern poet in tenth-century Baghdad who unexpectedly finds himself on a mission with Vikings from the north to defeat an invading tribe of savages. Sounds kind of awesome, doesn’t it? Unfortunately, this movie suffered a name change during production, extensive reshoots, the firing of one composer and the hiring of another, a whole year of delays, poor reviews, and ultimate financial embarrassment.

Guess what? I really like The 13th Warrior. I find the often-maligned plot extremely interesting and full of historically-accurate information. The movie is adapted from a novel by author Michael Crichton, who saw just about every one of his books turned into a movie (The Andromeda Strain, Jurassic Park, Sphere, Timeline, Rising Sun, Congo, Disclosure, and the list goes on) and wrote very cinematic novels that lent themselves to big screen blockbusters. This particular adaptation is from his novel Eaters of the Dead, and in the afterward of this book Crichton explains the inspiration for the story. He had a friend who gave lectures about boring literature and named Beowulf as being one of the greatest bores. Crichton told him that he disagreed and could tell the story of Beowulf in a really engaging way. Eaters of the Dead was the result. 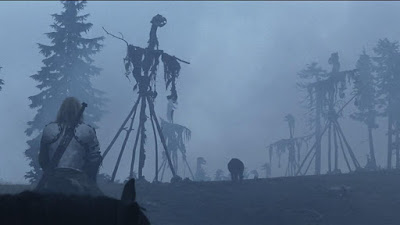 The novel and the movie share the exact same plot. Part of Crichton’s novel is based in fact and recounts the real-life travels of Ahmad ibn Fadlan, the actual ambassador to Baghdad who wrote extensive journals of his experiences throughout various parts of the world and is a Middle Eastern hero. The other part of the novel reworks all the stuff from Beowulf, changing the monster Grendel to a tribe of cannibalistic “mist monsters” that come at night and ransack all that they encounter. In the place of Beowulf is Buliwyf, a Norse warrior played by Vladimir Kulich (Smokin’ Aces, The Equalizer) accompanied by 11 of his kinsmen. When one of the Norse high priestesses tells Buliwyf that they will need a warrior party numbering 13 in order to defeat the cannibals, they conscript Banderas’ Ahmad ibn Fadlan to be their lucky 13th warrior.

John McTiernan was hired to direct the film version of this story and seems more than qualified to bring it to the screen. However, the film tested poorly (the rumor is that it was unwatchable) and Michael Crichton himself was allowed to direct reshoots, presumably to keep more in line with his original vision. Because of this, I can’t critique McTiernan’s work here against Crichton’s reshoots because I simply don’t know who did what, and the original cut of the film is long gone. The title was also changed from Eaters of the Dead to The 13th Warrior because I guess Eaters of the Dead doesn’t exactly scream “adventure” and probably would have scared casual moviegoers away. Despite not knowing who directed what scene or what exactly was added to the film, I can say that I think the story of the final product works, that I think the action is engaging, and that the performances are solid. The plot is grounded and realistic, and handles things in ways that I really appreciate as a movie fan. For instance, rather than have us read subtitles for the whole movie because we’re dealing with characters from multiple regions, the film has a scene that shows Antonio Banderas’ character learning the language of his Norse traveling companions, working out the recurring words and syllables in a montage that is very effective and saves us from having to suspend our disbelief that Vikings and Middle Eastern poets speak English all the time. 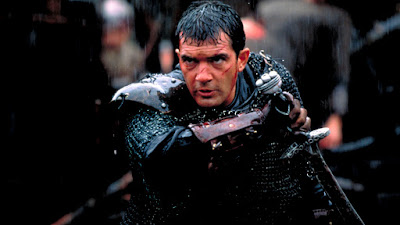 The film also allows Banderas’s character to be a heroic Muslim and an action star, which was rare in popular media in 1999 but is now even more so. Throughout the entire film, the character stays true to his beliefs and acts with honor and nobility, though he also stands beside his fellow men (with whom he has zero religious common ground) and fights against a common enemy. Of course, they could have--should have--given the role to an actual Middle Eastern actor, but Banderas is from Spain and the Moors ruled Spain for 700 years, so I can make allowances because it’s actually not as much of a stretch as it initially seems. It’s not like they cast Channing Tatum as a Middle Eastern character.

But let’s be honest about what’s cool in The 13th Warror: Viking action, and lots of it. We want to see big blonde and red-headed dudes in fur swinging swords at bad guys and chopping off body parts. The movie knows this and the movie delivers. And by giving our Viking heroes such disgusting, savage foes, they ensure that we can fully get behind the carnage with absolutely no sympathy for the mist monsters. They literally exist, like Grendel in the original story, to be beaten by our heroes in an epic fashion. It’s like a tenth-century Avengers! Buliwyf smash puny cannibal!

As I stated earlier, this movie has a really bad reputation. Critics were not kind to it at all (Roger Ebert…not a fan) and critics score on Rotten Tomatoes is a mere 33%, which I find staggeringly low for people who, in theory, have eyeballs. Omar Sharif, who appears in the movie, was so disillusioned with the final film that he retired from acting for a while, essentially saying that he didn’t want to make bad movies just for the paycheck. I don’t understand any of this. I remember seeing this movie for the first time when it opened in 1999. My friend didn’t want to go with me because word around the film was that it wasn’t very good, so went by myself and sat in a mostly-empty theater. I was completely caught up in the story. Granted, I like medieval history more than most, but I think the movie simply works. 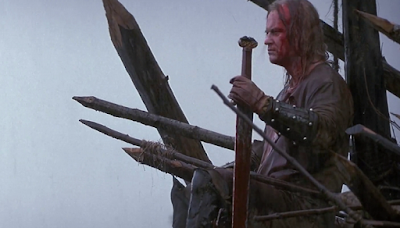 Whatever different iterations the screenplay had been through before it made it to the screen are of no consequence to me because I’m pretty satisfied with the finished product. This is all water under the bridge, anyway, and we must judge the film on the final product, not production history. I think this is smart, accurate in detail, and requires you to pay attention in order to reap any reward. While it’s full of action, I don’t think it has action for action’s sake, and everything is motivated by the story. It’s a solid medieval action movie with unlikely heroes, a ton of historical context, and situations drawn from real life. Deep, nuanced characterization in unexpected places pushes this into the realm of rarity, ultimately forming a unique action adventure that is unlike anything else.