I'll Watch Anything!: The Monster of Piedras Blancas 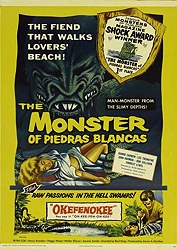 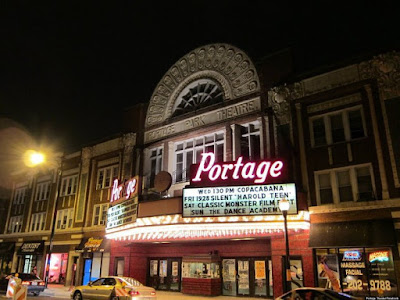 I saw the movie for the first time during one of those magical Saturday afternoons I spent every month from 2010 to 2013 at the Portage Theater in Chicago where they would program four, sometimes five, monster movies in one afternoon. JB and I were lamenting just recently how these monster fests no longer exist. On August 27, 2011 the Portage Theater presented the “Invasion Saturday Film Festival” featuring the films War of the Monsters, King Kong Escapes, The Monster of Piedras Blancas and the 1980 version of Flash (aaaaaaaaahhhhhaa) Gordon. I forever fell in love with The Monster of Piedras Blancas on that day. It was a movie I had never heard of and it took me completely by surprise. Before we go any further, let’s dispense with a plot summary and some backstory on the film.

The setting is the sleepy lighthouse town of Piedras Blancas. Sturges (John Harmon, who gives a sort of excellent but not excellent performance) is the lighthouse keeper of the town and is very superstitious and concerned for the safety of his young teenage daughter, Lucy (Jeanne Carmen). He leaves food for a sea monster who lives in a nearby cave. The locals disregard him at first, but they begin to take notice when the bodies of people murdered by the monster are found on the beach. A local scientist identifies a scale as being from a prehistoric humanoid presumed long extinct.

The film was independently made, written and directed by Irvin Berwick and heavily influenced by The Creature from the Black Lagoon. The Monster of Piedras Blancas was produced by Jack Kevan, who had supervised the manufacture of the Creature suit at Universal-International, and created the Piedras Blancas monster costume (which admittedly kind of sucks and looks like a warthog mixed with Gill-man). Both men were toiling in obscurity as contract employees at Universal-International. The Monster of Piedras Blancas also employed several of Kevan’s former Universal associates on the movie, including its soundman Joe Lapis and prop master Eddie Keys. The film was budgeted at $29,000 as Universal gave the filmmakers great deals on production vehicles and equipment due to the company being in a period of budget problems. Helping The Monster of Piedras Blancas production was seen as a way of helping many of the studio’s laid-off technicians who found work on the independent film. 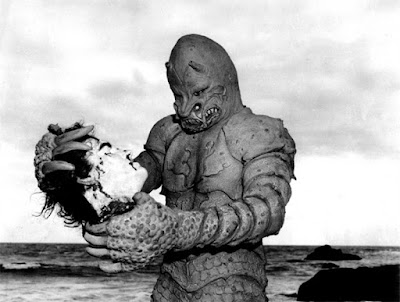 Getting back to why I love the film, there are two reasons: a) it’s a seaside horror movie just like Jaws and Carnival of Souls and b) it showed me things in a 1950s monster movie I had never seen before, including a shocking scene of onscreen gore when the monster makes its entrance carrying a bloody human head and later a shot of the same head with a crab crawling on its face. This is shit you never ever ever see in a 1950s monster movie. It was during this first gore scene I realized that I loved The Monster of Piedras Blancas. I was suspecting I was digging it leading up to that moment, but then I completely fell head over heels with the movie. The only other time gore made me love something was maybe the opening sequence of Wishmaster. 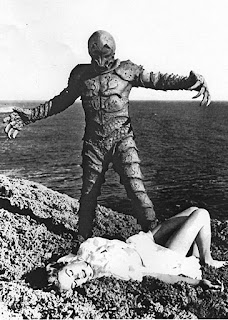 After the screening I searched for months for a copy of the movie on DVD to no avail. I was heartbroken. I eventually found it as a bootleg at a convention and I’ve revisited the movie many times since. Why would I bring up (and recommend) a movie you can’t find to you? Because it’s on YouTube right now! It’s perfect for Junesploitation! If you decide to check it out, leave a comment below and let me know what you think. I want to find more Blanc-heads. It’s a movie that’s a lot of fun if you watch it in the right spirit and most importantly, for me anyways, it takes me back to those great Saturday afternoons at the Portage.
Posted by Patrick Bromley at 5:00 AM