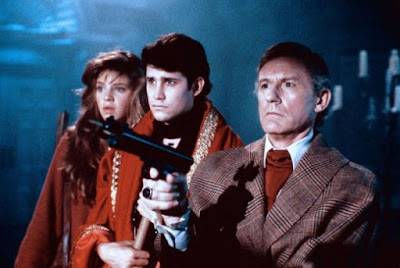 With those four words, the 1989 horror sequel Fright Night Part 2 lays out its entire reason for being. That isn’t just a line of dialogue. It’s the movie’s mission statement.

A great number of horror sequels of the 1980s followed a very specific formula: introduce a new group of victims to be taken out by the slasher or the monster from the first film and repeat all of the same beats that had worked before. It’s true of the Friday the 13th and Nightmare on Elm Street and Halloween and Hellraiser films and so on and so on — basically, any franchise that found success during the decade did so by resetting with each film and repeating the formula as many times as the box office receipts would allow. The structures of these movies lend themselves to this kind of repetition, as they’re more about executing a scenario (killer in the woods, killer in your dreams, etc.) than about telling a story or advancing a character arc. 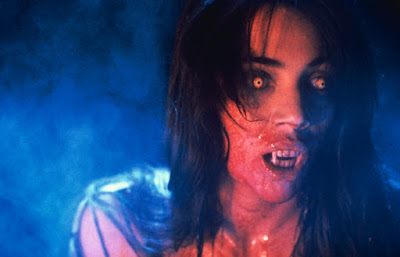 When a horror movie did put the focus on character and story over concept, it was much trickier to sequelize. As evidence, look no further than Fright Night Part 2, the sequel to writer/director Tom Holland’s surprise success from 1985. After grossing roughly three times its $9M budget, it was a forgone conclusion that Fright Night — which still stands as a modern classic and one of the best horror films of the ‘80s — would get the sequel treatment. Though a number of the original participants, including Holland and stars Amanda Bearse, Stephen Geoffreys and Chris Sarandon (reportedly deemed to expensive to bring back), had moved on to other projects, the producers went ahead with a sequel anyway, with stars William Ragsdale and Roddy McDowell the only cast members returning. Taking over directing duties was Tommy Lee Wallace, who was no stranger to horror sequels, having taken over the Halloween franchise with Halloween III: Season of the Witch several years earlier.

But Fright Night wasn’t designed for a sequel. Holland told a complete story with a beginning, middle and end. The characters all underwent major changes — the very essence of drama — and came out the other side of the story different people. The only way to sequelize the movie, then, was to reset them back to zero. And that’s exactly what Fright Night Part 2 does; though Charley Brewster had already fought and killed a real vampire in the previous film, Part 2 finds him undergoing therapy and convincing himself that vampires aren’t real. There’s the germ of an interesting idea there, as it means that he and TV host Peter Vincent (McDowell) — who now believes in vampires as a result of his experiences — have essentially swapped places. That idea is dropped fairly quickly, though, as the screenplay (by Wallace, Tim Metcalfe and Miguel Tejada-Flores) requires Charley and Peter to change their reactions to what is happening on a scene by scene basis.

So while Part 2 fails to really invert the Charley/Peter dynamic, it does succeed at making Charley less the hero and more the damsel in distress this time around. His previous girlfriend Amy is no longer in the picture (some dialogue explaining her absence was apparently cut out of the film), replaced by bookish new girlfriend Alex, played the lovely and appealing Traci Lin (sometimes credited as Traci Lind, sometimes credited as Traci Bromley). She is essentially playing the hero this time around, as she and Peter Vincent come to Charley’s rescue as he slowly succumbs to vampirism. Even the relationship conflict between her and Charley is very much the same as in the first film: he wants to have sex, she prefers to put on the brakes. The only difference between this and his relationship with Amy in Fright Night is that it seemed like by the end of that movie they were ready to sleep together. Giving him a new girlfriend resets this dynamic, too. 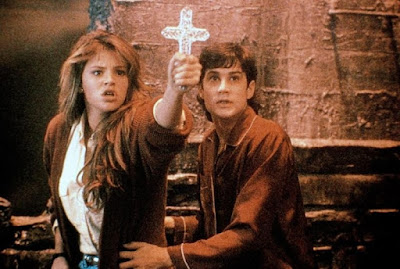 The other major change for Fright Night Part 2 is in gender of the lead vampire, as Chris Sarandon’s Jerry Dandridge has been replaced by Julie Carmen’s Regine, revealed to be Jerry Dandridge’s sister who has tracked down Charley and Peter to take revenge on them for killing her brother. Despite the swap in gender and the fact that she is established as being some sort of performance artist, there is very little to differentiate Regine from her brother. We see her seduce Charley on the dance floor just as Jerry once seduced Amy. She gets to mutter the immortal line “Welcome to Fright Night,” just as Sarandon did — though here it’s without the benefit of his punchline “…for real.” She even gets to turn into the same giant bat creature we recognize from Fright Night in the movie’s climax. The filmmakers seem determined not to fix what ain’t broke.

Like he did with Season of the Witch, director Tommy Lee Wallace at least ups the weirdness factor with his Fright Night sequel — though not too much, as Wallace was gun shy about straying too far from the original after the drubbing he unfairly took for Halloween. There are more vampires this time around; in addition to Julie Carmen’s sexy queen vamp, there’s a bug-eating henchman played by Cobra’s Brian Thompson, a super androgynous rollerskating vampire (choreographer Russell Clark) and Jon Gries’ jokey, pseudo-hippie vampire, regularly seen in some sort of hairy, partially transformed wolf/bat state. Wallace is just as much interested in the monsters as he is in the heroes, giving them a great deal of screen time and clearly enjoying the chemistry among the group. A scene in which they go bowling, scored to Wilson Pickett’s “In the Midnight Hour,” is one of the sequel’s biggest and best departures from the first film; we get to hang out with the vampires independently of what the heroes are seeing or doing. If only Wallace had been able to indulge these types of digressions more, Fright Night Part 2 might feel less like a rehash and more like its own thing. 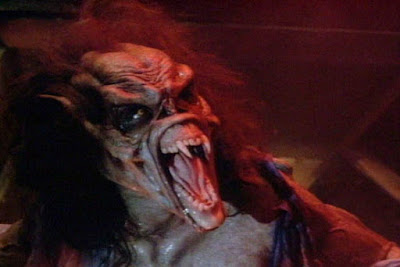 More than 25 years after its release, Fright Night Part 2 remains a fun little horror film but suffers from the same problems as so many sequels like it — it fails to really justify its existence beyond the usual crass commercial reasons. Though it originally had a troubled release — slated to come out in 1988, TriStar finally dumped the movie in a small handful of theaters in 1989 to weak box office and largely negative reviews — it has since developed a strong cult following. It’s not an easy movie to come by, having been released once on DVD in a lousy full frame transfer that went out of print years ago and now goes for way too much money from secondhand sellers. It's one of those titles that's always being requested for a Scream Factory Blu-ray release, but the rights remain in limbo and that's unlikely to happen.

The original Fright Night remains a truly special movie, one that feels both modern (for 1985 at least) and classical, which offers smart writing and great characters and which respects the rules of movie monsters. Most of the choices made in creating the sequel can be boiled down to “because that’s what they did in the first movie.” It’s a movie with a lot of personality. Just not its own personality.
Posted by Patrick Bromley at 12:00 PM