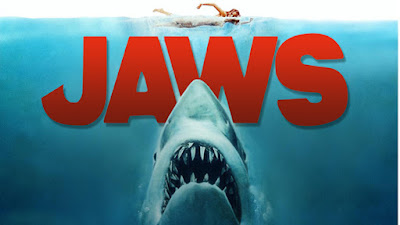 “I can do anything. I’m the chief of police.”

1975’s Jaws will be remembered as many things: inventor of the Summer Blockbuster, Steven Spielberg’s first hit, prequel to Jaws: The Revenge, and so on. We’ll remember its landmark special effects and John Williams’ iconic score. But while the film’s action/thriller bonafides are undeniable, a more interesting reading of Jaws might see it as the story of a quiet man fighting an interior battle with himself. Looking beyond the shark means seeing it for what it really rep-resents: fear. The people in Jaws fear all sorts of things, but only one of them handles that fear with poise, grace, and rationality. More than anything else, Jaws is about an Everyman becoming a hero by listening to his gut and keeping his head.

Police Chief Martin Brody (Roy Scheider) knows that a killer shark is stalking the shoreline off of Amity Island; he’s got the mangled remains of teenagers and fishermen to prove it. But Amity is a tourist town in need of summer dollars, and Smarmy Mayor Larry Vaughn (Murray Hamilton) believes that closing the beaches on the Fourth of July would doom them all to a slow death by starvation. He fudges the reports and assures Brody that he’s just a paranoid city cop who needs to adjust to his new surroundings. It’s his first summer, after all, and he’s probably just overreacting. But Brody knows better. Oceanographer Matt Hooper (Richard Dreyfuss) knows better. They beg Vaughn to listen to reason, but it’s not until after another attack on the beach, this time in broad daylight and in front of hundreds of tourists, that he finally agrees to hire Great White Hunter Quint (Robert Shaw) to kill the shark and rescue Amity from financial ruin. With Hooper and Quint in tow, Brody sets out to save his community, redeem his reputation, and confront his lifelong fear of the water.

Jaws’ first act firmly establishes Brody and his family as uneasy outsiders in an exclusive community; they weren’t born in Amity and will never have the chance to be true Islanders. It seems like an irrelevant detail at first, but it builds on Brody’s unshakable allergies to the island lifestyle and paints him as an amateur in the eyes of the public when he tries to explain why giant chunks of their neighbors keep washing up on the beach. After all, what does a city cop who’s afraid of the water know about their problems? It’s here we see that Brody’s major antagonist is himself: maybe he is just overreacting. Maybe he doesn’t actually know for sure. Maybe he should just get drunk and fool around with Ellen (Lorraine Gary). It all comes to a head in the moments before Alex Kintner’s death, when Brody loses himself staring into the ocean. The film wipes back and forth between the man and the water for a while and lulls us into a sense of security with a few false alarms. Then, in one moment (and with the second most famous dolly zoom in film history), Brody’s suspicions are confirmed and Amity goes into Full Holy Shit Lockdown Mode.

But Brody isn’t one to say “I told you so.” In fact, Kintner’s death only intensifies the stakes and reminds the chief of his personal investment in the town and its people. Though he could easily defer blame to Mayor Vaughn and let him deal with all the face slapping, Brody instead looks inward and realizes how far he’s going to have to push himself before this is over. Consider the scene at the dinner table: his son mimics his movements and comforts him even after he’s alienated everyone else. This draws a parallel with Alex Kintner and brings him back from his lowest point. Hooper isn’t exaggerating when he says that Brody is about to be the only rational man left; while Vaughn and the fishermen chase money and Mrs. Kintner chases revenge, Brody is chasing his conscience. He’s carrying all the weight along a slow path of logic and consequence while the others bicker and argue about their own personal gain. But in the long run, this patience is going to give him the strength to go toe to toe with the mayor and put up with Quint and Hooper’s cockfighting on the Orca. Plus, you know, deal with the man-eating shark.

Which brings us to the film’s last act: aboard the Orca, Brody discovers that the only thing more difficult than hunting a Great White is doing it with a white-collar shark fetishist and the ghost of Captain Ahab. Again, the chief finds himself the reasonable, steadfast man in a battle of egos; he must serve as a balance between Quint and Hooper and keep them from killing each other before the shark even gets a chance. At first, Brody seems hopeless: chum lines, knots, proper air tank care, it’s all beyond him. And worse, he’s in the middle of the ocean, the last place he’d ever want to be. This is great because it’s a significant threshold-crossing sequence and it extends the emasculation he’s dealt with the entire film. Quint and Hooper chide him for his inexperience and take turns bossing him around. He’s clumsy, scared, and decidedly lacking any badass scars. But while it’s true that he doesn’t have the experience of these two sailors, he’s got plenty of in-sight: he’s the first to see the shark up-close, the first to call for help, and the first to realize that They’re Going to Need a Bigger Boat.

That insight pays off in the finale, in which our rational man dispenses with physics and reason by blowing up a three-ton leviathan with a compressed air canister. But hell, he’s earned it. He’s consistently proven to be the only one trying to solve the problem in a coherent, level-headed way. Hooper tried to fight the shark with intellect. Quint tried to fight it with rage. Only Brody had the fortitude to simply outlast it. The timid and clumsy Everyman becomes a hero by trusting his gut and following through. It’s in the final moments of Jaws that we realize it’s essentially a film about a man getting over his fear of the water by going for a swim. No one else could kill the shark because it’s always been a stand-in for his insecurities; this has always been his battle. His survival doesn’t just result in the physical safety of his community, but also freedom from the outsider status that has been plaguing him since his arrival. He swims home stronger, wiser, and maybe, just maybe, willing to get in the water again.