Glutton for Punishment: Guyana: Cult of the Damned (aka Guyana: Crime of the Century)

Have you ever been so bored you feel like throwing up just to relieve the tedium?

We are all interested in bad movies, inexcusable cinema, and suicide cults, for that is the stuff we use to fill the empty spaces in our lives. You are interested in the unknown, the mysterious, the cyanide-laced—that is why you are here. And now, for the first time, we are bringing to you the full story of some of the worst movies ever made. We are bringing you all the evidence, based only on the secret testimony of the miserable soul who pulled up his roots, moved to a commune in Guyana, hoped for a better life, worked twelve hours a day six days a week harvesting grain, put all his faith in a Messianic leader, and ended up getting royally screwed. I am that miserable soul. The absurdly low budgets, the plots ripped from today’s headlines, the inane dialogue, the risible overacting—my friend, we cannot keep these a secret any longer. Let us punish the guilty. Let us reward the innocent. Remember, my friends: terrible movies such as these will affect you in the future! 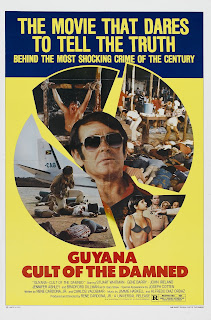 I was “lucky” enough to catch a theatrical screening of Guyana: Cult of the Damned when it was first released in 1979. The late, lamented Barrington Square Six Theater, our local second-run “dollar show,” offered it for all of a week. I can still remember both being repulsed and falling asleep—what a strange mix of emotions for a film to elicit! The film is so sleazy in its attempt to exploit a very real horrific tragedy, I am afraid that if audience members are shocked, sickened, and saddened by this awful little film, the filmmakers will somehow conclude that they have succeeded. They have not.

The Plot In Brief: The film was inspired by the very real Jonestown tragedy. In the film, Reverend James Johnson (Stuart Whitman) convinces his followers in San Francisco to follow him to Guyana in order to establish a new society and earthly paradise. Hundreds follow him but upon arriving at the commune discover that it’s actually a forced labor camp they are prohibited from ever leaving. California Congressman Lee O’Brian (Gene Barry) receives complaints from family members and vows to check out the situation himself. He brings several members of the press with him on his discovery mission. Needless to say, it does not end well.

You can watch the crazy trailer here:

Guyana: Cult of the Damned chooses to play what I have dubbed “The Name Game.” This is a laughable trope of many based-on-facts entertainments where, perhaps to avoid litigation, producers change all the names only slightly – it’s almost as if the writers are winking at us all and poking us in the ribs. (One of my favorite examples is 1978’s The Greek Tycoon. See if you can recognize the real-life story: The widow of an assassinated president takes up with a world-famous shipping billionaire. Sound familiar? Well in the film, the name of the 35th president is James CASSIDY, his widow is LIZZIE Cassidy, and the rich Greek who steals her heart is Theo TOMASIS. Hilarious. See, it’s not what you were thinking at all!)

In Guyana: Cult of the Damned the famous Reverend Jim Jones becomes Reverend James Johnson and the infamous “Jonestown” becomes “Johnsontown,” which is quite a mouthful, considering how many times it is said in the film. The continuity person here must have fallen asleep because at various points, James is referred to as both “Jeff” and “William.” Maybe they were testing out a range of pseudonyms to see which one played best. Cult member Sharon Amos becomes the movie’s “Susan Ames.” Congressman Leo Ryan, who made the ill-fated trip to Guyana, is here called Congressman Lee O’Brian. It’s as if the screenwriter was taking dictation from an actual witness but was hard of hearing or not paying attention. One thing I will say about this misbegotten film is that Stuart Whitman in the lead role of Jeff Johnson ACTS THE SHIT OUT OF THIS. Who can blame him? Approach any actor with a role that involves several roiling sermon/monologues filmed in close-up AND a drawn-out death scene? I dare them to not take the part. The role of James Johnson—or Jeff Johnson or William Johnson or Jeff Jimson, as my wife started calling him—is the acting equivalent of a banana split. Only instead of the pineapple it’s poison, and everyone dies.

I am guessing that not many people in film’s original audience were buying their tickets in hopes of seeing a bravura display of acting or even to have the phenomenon of religious cults discussed in depth. The selling points here are real human tragedy and a twenty-minute final act in which 900 human beings are fed cyanide and slowly, painfully die. Because the film is so artless, so nakedly craven about its own motives, and so uninterested in exploring any of the issues it raises only to exploit, our reaction to the “climax” of the film is not actually a reaction to the events depicted onscreen but a reaction against the small, sad, ugly spectacle the filmmakers have created. Perhaps we are also reacting to our own shame at having come to see it. 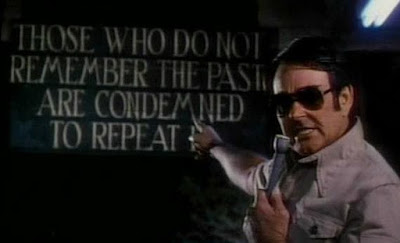 I find myself missing Roger Ebert more and more. I grew up reading his movie reviews in the Chicago Sun-Times. When I see something lately that is either very good or very bad, I wonder, “What would Roger have said about this?” Roger Ebert wrote the following about Guyana: Cult of the Damned: “[It] has crawled out from under a rock and into local theaters, and will do nicely as this week's example of the depths to which people will plunge in search of a dollar. The movie is […] so badly written and directed it illustrates a simple rule of movie exhibition: If a film is nauseating and reprehensible enough in the first place, it doesn't matter how badly it's made—people will go anyway… Why did a reputable studio (Universal) pick up this vile garbage for national release, and why is it showing in such theaters as the Plitt flagship, the Chicago? Because there is money to be made from it, I suppose… It is a geek show. Universal and its exhibitors should be ashamed.”

My friend, you have now read this column, based on my own sworn testimony. Can you prove that this film doesn’t exist? Perhaps on your way home, someone will pass you in the dark, and you will never know it, but he or she may be a surviving member of the original Jonestown cult! Many scientists believe that bad movies are being filmed at this very moment. We once laughed at fire, the wheel, gravity, churches, the electric light, and airfield shootouts. So much laughter! And now some of us laugh at very bad movies. God help us in the future.