These people have figured out how to make every day a Disney vacation.

A few months ago, a new documentary about Disney quietly debuted. Helmed by filmmaker Anthony Cortese, The Dream Finders takes a look at a side of Disney that hasn’t previously been highlighted: the professional fan. The film focuses on a handful of internet personalities who love the Disney parks so much that they’ve moved to Orlando and pursue Disney as a lifestyle. These aren’t just any fans, either; they’re entrepreneurs, authors, podcasters, and YouTube channel hosts who have carved out a niche market within a niche market that allows them not only to pursue their Disney fandom full time, but to make a living doing so. As a massive Disney nut, a documentary like this couldn’t appeal to me more. 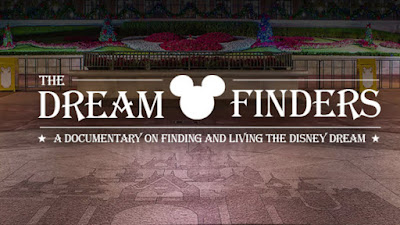 The entrepreneurs that the film follows include a handful of podcasting and blogging pioneers who have been covering all things Disney for years, some for more than a decade, including Ricky Brigante (Inside the Magic), Lou Mongello, (WDW Radio), JeniLynn Knopp (The Disney Driven Life) and John Saccheri, (Big Fat Panda). The film also features Ron Schneider, the actor who brought life to a walkaround EPCOT character called “Dreamfinder,” a living embodiment of the power of imagination and dreams. Schneider, though very much a human being, has a Santa Claus quality in his demeanor and appearance. It’s no wonder he’s impacted literally millions of people through their visits to EPCOT over the years. He’s a legend in Disney circles, and his presence here is icing on the cake.

The director Tony Cortese made this film because he himself was captivated by the Disney way of life. In a recent interview with Stamford Advocate, he explains that, at 50 years old, his passion has grown over the years and that as his daughter’s interest waned as she grew older, his only intensified. He was aware of people across the world who had left successful businesses and taken the plunge by moving to Celebration, FL—literally the town that Disney built—and who took their love of the brand beyond the realm of hobby and into full-time job where they flourished and thrived. His documentary is a character study in the entrepreneurial spirit, but with added mouse ears. 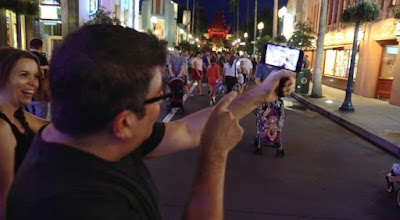 Part tribute and part tutorial, the conceit of the film is that Disney Magic is real for these people and that by allowing that magic to lead their life, they’ve managed to find both happiness and success. At times it feels a bit like a motivational film, not entirely dissimilar from the stuff of late night infomercials. However, we get to spend significant time with each person and discover how they’ve incorporated Disney into the center of their daily lives in ways that are infectious and legitimate. Luckily, this documentary isn’t selling anything; it’s merely offering a glimpse at how a few people have chosen to live and the happiness that pursuing their goals has brought them. One of the strengths of the film is that it showcases how all these people are completely different, but yet also very similar. While varied in temperament, personality, and background, all of the subjects are incredibly driven and hard-working, and all of them decided to leave their homes across the country (or the world, in one case) move to Florida, and pursue their passion for Disney as a sustainable career.

While this documentary is very much geared to a Disney audience, I think it holds general appeal outside of the hardcore Disney crowd by depicting subjects who have doggedly pursued their passions and refused to quit. The advice given is bound to produce eye-rolls in some, especially in a post-internet landscape where dreams are best guarded and kept to one’s self. Still, one of the things that I love about Disney that I hope comes through in my writing about their films here on the site is that they frequently say “you can” where others say “you can’t.” This is an entire documentary of people who not only believed they could, but did. 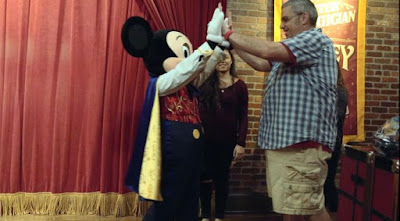 I really champion documentaries like this one. There’s a thin line between genuinely paying tribute to an ideal and patronizing sentimentality. I feel like the film is sincere and uplifting, but your mileage may vary. I’m an easy target for this sort of thing because I’m a huge Disney fan (particularly the parks) and because the idea of pulling up stakes and moving to Florida is something I’ve thought about myself.

While it was the product of a successful Kickstarter campaign, there’s very little information about this documentary on the usual mainstream entertainment websites, but lots of word-of-mouth coverage on Disney blogs and among the Disney fan community. Also, I’m also unclear what the actual title of the film is because it has been promoted as both The Disney Dreamfinders and The Dream Finders. I’m going with the latter because that’s what is on the screen. There are no DVDs or Blu-rays. In fact, the only way you can see the movie at the time of this writing is by visiting a screening in person (it will be showing at the Central Florida Film Festival in Orlando the first weekend of September) or by purchasing a digital copy of the film on an independent digital platform called VHX. The link to the documentary’s webpage is http://dreamfinders.vhx.tv/.

I love The Dream Finders. Going beyond the fact that it covers a subject that I care about deeply, it’s also inspiring and sincere, heartwarming and uplifting. Disney’s cartoons and movies can be criticized for a variety of things and broken down into their components, most of which are well-worn tropes. They are, after all, fictional stories. This story, however, is the tale of real people who took a chance and were able to make a successful career out of their passion. They should be celebrated, and so should this documentary.
Posted by Patrick Bromley at 12:00 PM