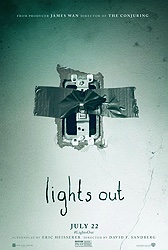 Could it be possible that in the span of one movie I’m worn out on the James Wan brand? While Wan only produces Lights Out (David F. Sandberg directed the feature, based on his excellent short film), this was the movie that made me feel like the Wan approach to the paranormal is played out. This was a sneaking suspicion for me during The Conjuring 2, but now my worry is more substantiated. I say this as a fan of both Wan and Lights Out. This movie put me in a weird spot. I feel like a hater trying to knock someone down from a career-high pedestal on one hand (plus, Blumhouse aside, the man is practically saving theatrical horror’s financial viability), but on the other I used to enjoy how wildly varied James Wan productions were within the horror genre and lately they’re all very similar. Enough about that, though. Let’s talk about Lights Out. 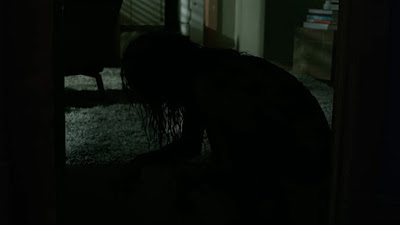 It tells the story of a young boy named Martin (Gabriel Bateman) having trouble at home with his mother (Maria Bello). When it’s revealed that Martin is being haunted by the same entity that drove his stepsister Rebecca (Teresa Palmer) away, Rebecca returns, coming to Martin and her mother’s aide. As an expansion of a three minute short film into an 81 minute feature, David F. Sandberg really shows an assured hand behind the camera. While his producer James Wan is all about moving the camera, Sandberg shines with the film’s sound design, and Lights Out is partially as suspenseful and effective as it is on the shoulders of its sound crew. The squeaks of doors, the scraping of a floor, the thud of lights running out of power or flickering to come back to life, etc., all add invaluably to the scare sequences in Lights Out. It’s a technical triumph.

The performances are pretty strong, too, particularly by Palmer and Bello. I’ve always thought that Teresa Palmer was a breath of fresh air in any movie she was in (she’s another one of the great Australian beauties in film…do I need to move there?) but here she’s really given a nice character to play and she proves to be a solid anchor and not just a valuable ensemble player. She’s great at playing a mixture of warm but distant, guarded but vulnerable, and her American accent is on point; it's just gravelly and weary enough to make the audience believe that she’s kind of tired of the shit she’s currently going through, having been through it before. Bello’s part is trickier, as she has to play someone with mental health issues and not be manic. There’s a certain unpredictability of what she’s going to bring to each scene and that’s a lot of fun. You never know if her character is going to be a nurturing and protective mother or someone with a loss of grip on reality. Also very good is a well-written boyfriend character (to Rebecca) played by Alexander DePersia. I say well-written because he’s just nice and supportive and doesn’t have character baggage that gets in the way of the movie’s A plot. Come to think of it, this movie doesn’t really even have a B plot. That’s what a lean, muscular 81 minute runtime does. This film is edited down to its essentials. 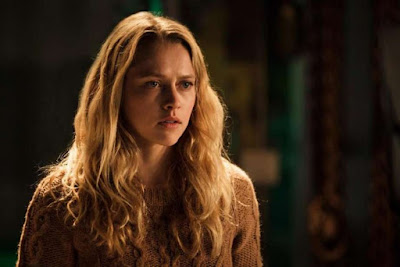 If read at the surface level, I think that Lights Out is good. It’s not a horror all-timer, but it’s an enjoyable night out at the movies and one you’ll remember a few years from now when you turn to your spouse and say “Hey, remember when we saw Lights Out? That’s was fun.” Where I think it has some problems is if you read the movie as making a statement on mental illness. It has some resonance in that it shows how relationships can suffer when a spouse is trying to help their partner through a mental illness or how it can be passed down from one generation to the next, but the way Lights Out resolves this plot (if the movie is positing it has an answer or opinion on mental health to begin with) is deeply problematic in terms of its “advice” on how to conquer it. That’s the film’s biggest flaw I think. I might be reading more into Lights Out than intended, but I don’t think I am. A lot of this is presented as text and not subtext in the narrative. I also was taken aback a bit by how similar the “mystery” of the creature was to a lousy ghost movie from 10 years ago. You know which ones I’m talking about – the ones from Dark Castle or a J-Horror remake where everyone was once the victim of a mental asylum and had a grudge. 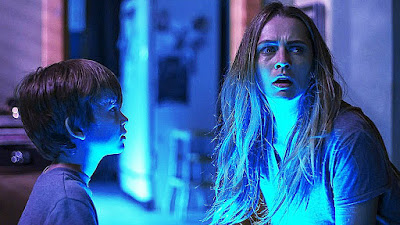 Boasting some neat monster effects (the entity looks like a leftover creature from Demon Knight), Lights Out has enough power that I look forward to seeing what David F. Sandberg will do next. He’s tapped to direct the Annabelle sequel, which is kind of exciting. I’m hoping he’ll bring legitimacy to the underrated original with a kickass sequel, similar to what I’m hoping will happen with Mike Flanagan’s new Ouija movie due in October. The only thing I ask is that Sandberg pushes the envelope a little further. If Wan has become a brand, Sandberg is not the quite there so I’m hoping he makes something a little more fucked up than the PG-13 teenager-friendly Lights Out. Mainstream horror is becoming, in a weird way, a safe and predictable place and the paranormal films are part and parcel to that. Are they suspenseful? Sure. But suspense releases itself. I’d rather see something creepy that festers and gets under my skin after I watch it. Independents are where it’s at for this type of horror. Mainstream has become a surface level-haunted house-roller coaster game. I just want a studio to have the balls to make a movie as big as Lights Out that causes the audience to pass out. Maybe that’s too much to ask? But it would be fun!
Posted by Patrick Bromley at 12:00 PM