A Harsh Mistress: Starting Over in Moon 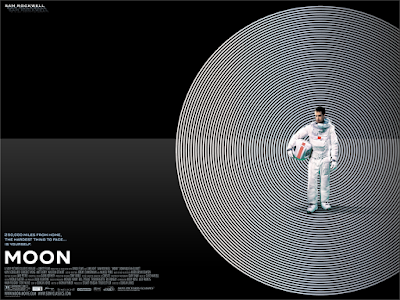 “You’ve been up here too long, man. You’ve lost your marbles.”

Everyone needs some time to themselves every once in a while. A really good stretch of alone time recharges the batteries and gives us perspective. It cools off angry tempers and makes devoted hearts grow fonder. But what are we taking refuge from? What kind of pressures are stacking up? What exactly do we learn about ourselves when we’re alone? Duncan Jones’ 2009 film Moon takes these questions to their logical extreme, one that lies roughly three hundred thousand miles from Earth. It’s about a lonely man in a lonely place who’s had more than enough time to reflect and is eager to reconnect with the world. But it isn’t that simple. Like all great science fiction films, Moon uses the trappings and idiosyncrasies of the genre to tell an essential human story. This one is a war of the psyche, a battle between a man and himself. While being stranded at the ass end of space doesn’t sound like the most opportune time for personal growth, the metaphysics at play in Moon allow our hero to explore sides of himself he’d long left behind and discover things he hasn’t yet imagined.

Sam Bell (Sam Rockwell) is going a little stir crazy. He’s finishing up a three-year contract for Lunar Industries, the company that has revolutionized alternative energy by mining fuel from sources on the far side of the moon. Sam’s job is essentially to maintain the equipment, report and repair any errors, and send filled fuel canisters home to Earth. His only companion is GERTY (Kevin Spacey), the base’s artificially-intelligent supercomputer who also acts as his personal assistant. Sam’s done well enough keeping busy all this time, but he’s counting down two more weeks of service before heading back to the wife and child (Dominique McElligott and Rosie Shaw) he left behind. But now things are getting weird: he’s seeing visions, feeling strange aches and pains, and ends up crashing his rover and passing out. He wakes up in the infirmary and realizes something is off. Though GERTY assures him he’ll make a full recovery if he just sits tight, he returns to the crash site and finds an exact, unconscious clone of himself. From there, things get weird.

On its surface, Moon is a quiet science fiction story about an employee rising up against the evil corporation that has oppressed and enslaved him. If it were nothing else, that would be enough. But what’s really interesting about the film is wisely kept in subtext: Consider Sam One, whom we meet at the beginning. Sam One is eccentric and a little disheveled, like the weird uncle you avoid at family gatherings. He builds miniature towns and takes tender care of his plants. He’s soft-spoken and misses his family something fierce. Now consider Sam Two, who wakes up in the infirmary: he’s anxious and aggressive. He punches things. He’s incredulous and a little obnoxious; fresh off the boat, as it were. It’s after a little digging that we learn they’re both built from the memories and personality of the original Sam (Sam Prime), and that the messages from his family are years-old and not for them at all. There’s only one conclusion here: Sam Two is who Sam Prime was when he left Earth, and Sam One is who Sam Prime became after a three-year stint at the worst all-inclusive ever. We’re not only looking at different physical versions of the same man, but also at that one man during different phases in his life.

The Rosetta Stone to all of this is Tess (McElligott), Sam’s wife. She shows us that there were major problems in their relationship before Sam even left and that this three-year mission acted as a period of sorely-needed emotional separation. Consider her messages: in the first, she begs Sam to come home soon and reaffirms her love. In the second, she asks Sam for time to think and leaves things a bit more nebulous. But these messages are actually presented to us out of order: Sam One is seeing Tess’ final message, the one that comes after years of reflection and renewal. Sam Two is seeing her first tense, uneasy message, the one she recorded when she didn’t know how this was all going to shake out. This deepens the meaning of Sam’s hallucinations and, more importantly, shows that the film is using its location as a metaphor: Sam is on the far side of the moon both literally and emotionally. He’s separated from his family in every way possible.

Now we can start to pick apart the ways the Sams influence each other. Think about how irritated and violent Sam Two is at first. He’s cold and condescending; he refuses to shake Sam One’s hand or even acknowledge him as a person. It’s only after trashing the Fairfield model that he admits he needs to work on his anger issues. “Yes, you do,” Sam One replies knowingly. “I see what Tess was talking about,” he tells GERTY. Sam One is calm and conciliatory because he’s had three years to work through those exact issues; he’s even a little horrified by who he used to be. This puts them worlds apart for a while, but as they work together to escape the base and expose Lunar Industries’ flagrant disregard of clone-related workplace laws, they begin to rub off on each other. Sam Two’s mind is sharper, fresher. He figures out Lunar’s plot right away and starts taking care of his double. Sam One becomes more hostile and belligerent as he decays. It’s notable that the very last conversation they have is about the day they met Tess. They’ve finally met in the middle and solidified their common ground.

It’s hard to see the end of Moon in a hopeful light: Sam Two escapes, sure, but he’s still completely alone in the world, with no real right to see his daughter and only three years to live. He’ll never actually be the person he thought he was or live the life he expected. But the genius here is that he got to learn from a version of himself who is three years wiser and stronger than he is now. He’s seen how he can overcome his anger with the right incentive. Consider a symbolic reading of the “decay” that Sam One succumbs to: is it necessarily built into the clones, or does it result from three years in isolation? Maybe emotional clarity and a good friend or two can stave off the painful end that consumed all the other Sams. Maybe he can get in touch with Sam Prime or file a legal injunction against the Moon Base Clone Carousel of Death. At the very least, he’ll get to spend his three years a lot better off than any Sam has before.