Everyone, it seems, has a favorite classic Walt Disney cartoon.
This is my favorite. 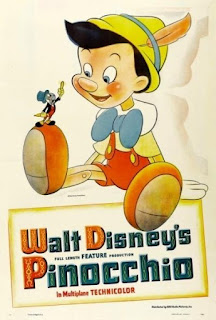 Pinocchio, produced in 1940, is the pinnacle of Disney feature animation. Factors that would soon make it impossible to create this level of animation were already looming on the horizon during Pinocchio’s production: unionization of the scores of workers it took to ink and paint tens of thousands of animation cells by hand; the bombing of Pearl Harbor, signaling the start of World War II, which would block Disney’s films from some foreign markets; and the financial and critical albatross that was to be Disney’s next film, Fantasia.

The Plot In Brief: Geppetto is a lonely wood carver who craves company. He creates a puppet, Pinocchio, out of wood and prays for a real son. The Blue Fairy almost grants his wish by making Pinocchio a living puppet, not yet a real boy—Pinocchio will need to earn that. To help him on his way, the Blue Fairy appoints lively Jiminy Cricket to be Pinocchio’s conscience. 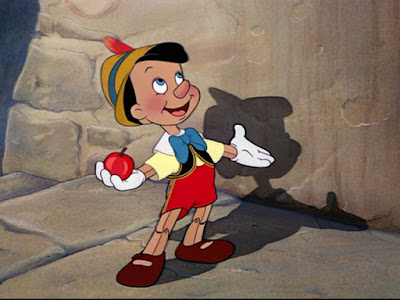 Pinocchio sets off to school but is waylaid by bad companions who convince him to become an actor; really, they sell him to a puppet master who exploits his “living puppet” status and imprisons him in a cage when he’s not performing. Escaping from that situation, Pinocchio is waylaid by bad companions and ends up on Pleasure Island, where little boys are allowed to do anything they want (seldom a good idea.) After some great unpleasantness on Pleasure Island involving donkeys, Pinocchio returns home, only to discover that Geppetto has gone looking for him. Pinocchio finds Geppetto in the belly of a whale and that leads to a (hee-hee) whale of a climax.

For fans of classic cell animation, Pinocchio is a tour-de-force; Disney was never able to top the technical expertise on display here. The film opens with Jiminy Cricket’s entrance in a spotlight; gradually he begins to sing. Casual viewers might take that spotlight for granted until they realize that they are looking at a drawn character on a painted background being illuminated by drawn light. It is astounding that the artists, technical staff, and camera operators were able to accomplish these sophisticated visual delights. 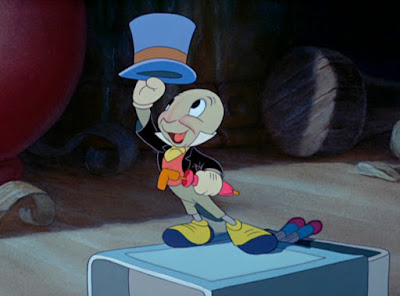 Like light, water is famously difficult to animate, a truth these animators seemed to take as a personal challenge. In Pinocchio, the audience is treated to multiple instances of driving rain, a splashing fishbowl, characters getting doused (and shaking off glistening water droplets), and a climactic chase through the ocean between a great whale and a tiny boat, Geppetto and Pinocchio fighting against enormous discrepancies in scale.

It is only natural that children’s films contain messages and morals, and believe me, The Pope can go on and on about the messages some modern children’s films impart—some heartwarming, some pretty shitty. Ratatouille is about not allowing others to define you; The Secret Life of Pets is about… ninety minutes of my life I will never get back.

The messages in Pinocchio are not subtle, but they are the heartwarming kind: Listen to your folks, go to school, do not be waylaid by bad companions, always let your conscience be your guide, and most importantly, when we talk of home we do not mean a place but rather the people in it. When Pinocchio finally arrives back at the “home” he’s been pining for throughout his bad-boy odyssey, he immediately leaves again: it is not home, because Geppetto no longer waits there. Pinocchio must go find him. 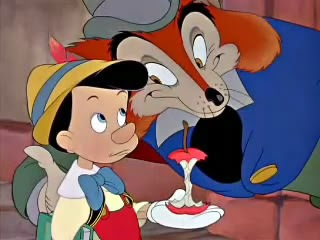 Disney learned early on that hit songs and hit movies go hand-in-hand; a song could promote the movie on the radio and the movie screenings would spur sales and airplay of the songs. “Some Day My Prince Will Come” and “Hi Ho Hi Ho—It’s Off to Work We Go” from Snow White and the Seven Dwarfs had cemented that lesson at the Disney entertainment factory. Pinocchio contains the song that was not only a massive hit and Oscar winner, but also became emblematic of the Disney Company and all it would achieve for the rest of time: “When You Wish Upon a Star.” With a beautiful melody and sweetly-longing lyrics, the song gives hope to the hopeless (which, in the waning days of the Great Depression, was almost everyone in America at the time this film was released.) For some unfathomable reason, this is one of the few emotion-laden things about which I am not hopelessly cynical, another reason for my love for this film.

When you wish upon a star
Makes no difference who you are
Anything your heart desires
Will come to you.

If your heart is in your dreams
No request is too extreme
When you wish upon a star
As dreamers do. 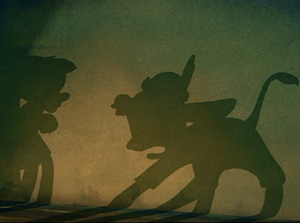 Pinocchio’s Three Miracles: Astounding and ground-breaking animation; one of the greatest and scariest man-to-animal transformations in a non-horror film; and the film’s strong humanist message that, even while confronting some truly awful human beings, Pinocchio never wavers in his wish to become a real boy.