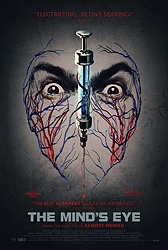 Prepare to have your head exploded!

The Mind's Eye, writer/director Joe Begos' follow-up to his debut feature Almost Human, plays like a cross between Scanners and The Fury shot by Luciano Tovoli and scored by John Carpenter. At this description, you're likely to find yourself either Googling some of those names and titles or you've stopped reading so you can purchase the movie on iTunes immediately.

Graham Skipper reunites with his Almost Human director to play Zack, a born telekinetic who has been held prisoner for years by the evil Dr. Michael Slovak (John Speredakos) to undergo experiments with the promise that he will one day be reunited with telekinetic/love interest Rachel (Lauren Ashley Carter), who is being held separately at the institute. When the pair escapes, Slovak sends his henchmen after them while also receiving injections so that he might become the most powerful telekinetic in the world. 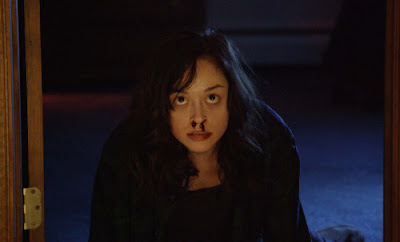 The plot of The Mind's Eye is incredibly simple. So's the movie, really. Begos isn't interested in pushing the genre forward or shattering the template from which he draws his inspiration. Like in his debut effort, Begos once again demonstrates that he's less a formal storyteller than he is a fan of certain kinds of movies, so his work exists to pay tribute to what it is that makes those movies awesome. This isn't one of those cutesy pastiches of genre movies past; he's not doing a bunch of visual references (though there are a few) or winking homages to specific films. It's more the spirit of the thing that Begos is chasing.

The spirit he gets right. While Begos has shown growth in both scope and technique since Almost Human, The Mind's Eye still has the same feeling of a home movie made with a bunch of friends -- which it more or less is. But what a group of friends! Any fan of indie horror from the last five years will undoubtedly get a charge out of seeing not just Skipper and Carter (arguably the truest new Scream Queen we've had in years), but also Noah Segan from Starry Eyes and Jeremy Gardner from The Battery and Matt Mercer from Contracted and Larry Fessenden from everything, here getting his very own Dennis Hopper-in-True Romance moment. The only bummer of a performance comes from Speredakos as Revok Slovak, who cranks up the villainy way past 11 and ends up creating a character that feels out of step with the rest of the film. Sure, The Mind's Eye can be big and operatic, but it's rarely broad. The same cannot be said for Speredakos. 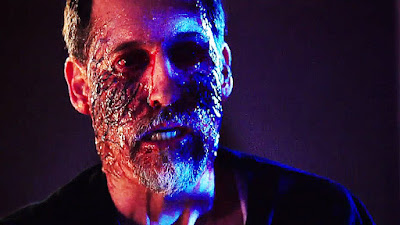 More than anything, this is a movie made of moments -- those high points that carry us through the slow patches, much the same way that many of the '80s sci-fi horror films we grew up loving were constructed. There's a kind of perverse pleasure Begos seems to derive in delaying the gratification of an exploding head. Yes, we know this whole thing is a tribute to Scanners, and, yes, Cronenberg put an exploding head into Scanners' opening scene, but that's because no one knew it was coming. We expect it in The Mind's Eye, so Begos keeps drawing it out: we get the buildup, we get the possible victim shaking violently, we think we're going to get the money shot and then something interrupts the moment and gives us exploding head blue balls. The movie does it enough times that I started laughing every time a person almost explodes and then doesn't. The good news is that when Begos finally delivers the moment, he really delivers the moment.

Another scene, in which an overly dramatized, slow-motion love scene is intercut with Dr. Slovak getting a needle inserted into his neck, is the movie's real litmus test. If you can laugh at the orgiastic way that Begos depicts both kinds of penetration, all bathed in the bold reds and blues of Inferno-era (era) Argento, this is a movie for you. It's a parody of this kind of sex scene, calling attention to certain stylistic tropes and goofing on them simply by turning them up and juxtaposing them with those same tropes applied to a medical procedure, but it's also a scene about characters on both sides of the divide finally getting what they want most. The visual irony is washed away by the sincerity. It's the movie in a nutshell. There are plenty of people who might laugh off a film about dueling mind powers and exploding heads, but Begos means this shit. 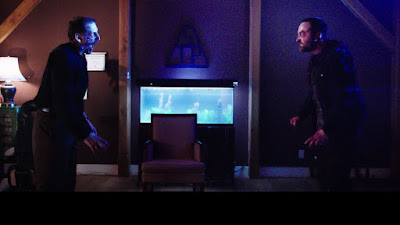 The meaning it makes all the difference. Begos isn't just cashing in on our nostalgia or loading the movie with a bunch of cheap signifiers to remind us movies we love; he's made a movie that reminds us why we love the movies we love. Whether it's the colorful cinematography (by Begos himself), the synth score by Steve Moore or the very cool, very bloody, very practical makeup and gore effects, The Mind's Eye is the kind of genre throwback that puts the fun first. It has no illusions of being the next great horror masterpiece. It just wants to be a cool little movie that reminds us of our favorite stuff from Scanners and The Fury and rip some bodies up with mind power. And it does all that.
Posted by Patrick Bromley at 12:00 PM