I really miss this guy.

Movie history will probably remember Tom Hanks as a modern Cary Grant or Jimmy Stewart, an actor so versatile and capable that he could work in any genre and bring just about any part to life. You’d be hard pressed to find someone who doesn’t like Tom Hanks and who doesn’t think that he’s an American treasure; he’s a multiple-award-winning actor with a resume that’s long and varied, and who commands the respect of just about everyone that he has worked with. He’s instantly likable, and his passion for various causes and subjects is a big part of the success of shows like Band of Brothers and From the Earth to the Moon. For more than thirty years, he’s been at the forefront of great entertainment. 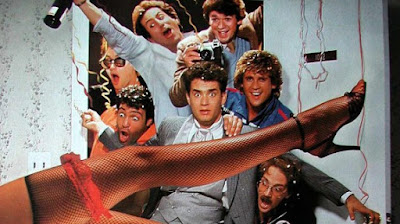 The Tom Hanks I love is laugh-out-loud funny. He makes crazy faces and yells a lot when he gets exasperated. He made a name for himself dressing in drag on Bosom Buddies and was Alex Keaton’s hero Uncle Ned on several “very special” episodes of Family Ties. His natural comedic timing and ability lent themselves to the funny everyman role in movies filled with wit and whimsy, which is what he dominated for the entire decade. He was The Man with One Red Shoe, a guy who has a crazy night in Bachelor Party, finds and falls in love with a mermaid in Splash, joins the Peace Corp to get out of trouble in Volunteers, and buys a house that requires a whole lot more maintenance than he bargained for in The Money Pit.

When I was a kid, the movie that I loved the most that starred Tom Hanks was Big. Looking back, it’s obvious why: it’s about a twelve-year-old boy who makes a wish on a Zoltar fortune telling machine and gets to be a grown up. I loved it then because it allowed me to fantasize about what it would be like to have all the benefits of being grown up but with the sense of fun and adventure that comes with being a kid. Now I love it in a kind of sad nostalgic way as someone who has bills and a mortgage looks back on the endless days of childhood, but I also love it because Tom Hanks is amazing in the movie. He conveys the excitement of being a kid in an adult’s body, but there’s also a lot of stuff going on under the surface like fear, sadness, and amazement. It was an early indication of Hanks’ wide range, and is still one of my favorite performances from the actor. The story is nothing new or special; this is the kind of movie that has been made over and over again, but I think there’s something different about Big, and I think it’s the heart that Hanks brings to the screen. 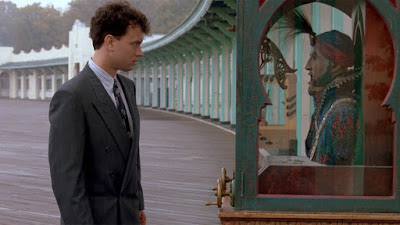 1989 brought two Hanks movies in Joe Dante’s The ‘Burbs and the canine cop buddy comedy Turner and Hooch. Back then, I preferred Turner and Hooch because it had a dog doing funny things. Looking at them now, I think Tom Hanks as a cop was a bit of a stretch at the time (so was his role as a detective in Dragnet), but I loved the Odd Couple aspect to the story about a neat guy and a messy dog having to cohabitate. Revisiting The ‘Burbs as an adult suburbanite, though, reveals that both Dante’s direction and Hanks’ performance are absolutely genius. Though both probably go a little too far and could have been reigned in, The ‘Burbs is a wacky, ridiculous movie that isn’t afraid to be very dark. It’s Hanks’ The Cable Guy in that it goes so dark that it might have turned off some of his fans, but I love it. It’s the best of all worlds for an eighties Hanks fan because he gets to be that everyman who slowly devolves into hysteria, but the movie also allows him to display his slapstick comedy skills. Dante uses every frame to accentuate the goofy nature of the movie, and as far as I can tell, it’s the last time Hanks went completely big and over the top with a performance in a movie.

We see flashes of the wacky eighties Hanks in a few nineties movies like Joe Versus the Volcano, Bonfire of the Vanities, and A League of Their Own (“Are you crying? There’s no crying in baseball!”) and especially in his role as Woody in the Toy Story films and television specials, but the kind of Tom Hanks performance that I love and that defined his work in the 1980s seems to have ended with the closing of the decade. In 1993 he played a much more subdued romantic lead in Sleepless in Seattle and a man with AIDS in Philadelphia later that same year. His work on screen was incredible. He won an Oscar for his performance, which no doubt led to the following year’s dramatic hit Forrest Gump, which--despite how many times cable TV tells me is funnier than I remember--I have no desire to revisit. Another Oscar win in 1995 and the goofy Hanks I love was gone. In his place is a serious dramatic actor who makes movies like Bridge of Spies, Captain Phillips and Sully. 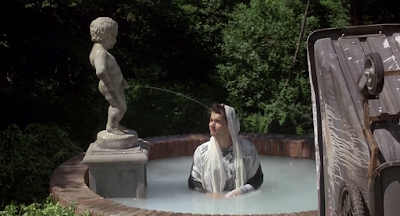 Don’t get me wrong. These movies are routinely great from a performance standpoint, and Hanks always elevates whatever he’s in. He makes the unwatchable watchable, and I have a HUGE amount of respect for the man and his work. Many of his films have a prominent and proud place on my shelf. I have near-religious reverence for Cast Away and Road to Perdition. His first directorial effort, That Thing You Do! comes closer to being one of my all-time favorite movies with each viewing. Sometimes I just really, REALLY miss the Hanks that I came to love back in the eighties. You can tell that the wacky guy is still inside him somewhere because it comes out in his Toy Story performances, and he still routinely makes me laugh when he stops by Saturday Night Live. If you haven’t seen “The Astronaut” sketch from Maya and Marty, go watch it now, because there are glimpses of the comedy master on display.

What is it that makes an actor who started his career with laughter stick mostly to drama for twenty years? Is it a fear that they won’t be taken seriously again if they go back to making people laugh and that they’ll damage the reputation that’s been built on Oscar-winning work? Just like how Bill Murray got started on Saturday Night Live and Caddyshack doing funny voices and now almost never does, there seems to be an opposition to the very thing that put them on the public radar in the first place.

At least we have those old eighties movies, though. I can pull them off my shelf and watch Hanks go nuts whenever I want to. For me, the eighties will always be my favorite decade for Tom Hanks. You can have your Forrest Gump and Apollo 13. I’ve got Uncle Ned and Big and The ‘Burbs.
Posted by Patrick Bromley at 12:00 PM

Email ThisBlogThis!Share to TwitterShare to FacebookShare to Pinterest
Labels: '80s comedies, bachelor party, big, forrest gump, heath holland on, that thing you do, the burbs, tom hanks, turner and hooch