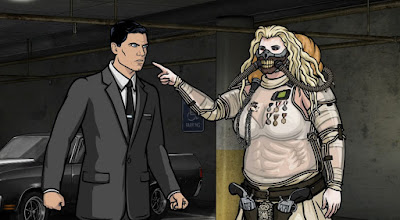 From Sci-F to Horror, Drama and back to Star Wars, season three of my favourite series Archer leaves no genre untouched. Except for the icky ones...

Continuing with my exploration into the film references that add the extra zing into a show that is nothing but entertaining whether it be your first or ten thousandth viewing, we jump face first into season three.

Episode 1 ("Heart of Archness, Part 1"):
Sound familiar? It should, as the first three episodes of season three touch on aspects of Joesph Conrad's novel Heart of Darkness, which was adapted for the big screen by Francis Ford Coppola as Apocalypse Now (1979).

Episode 2 ("Heart of Archness, Part 2"):
It was inevitable that my boyfriend The Rock, (....sorry, EX-boyfriend) would come up again in conversation. BAM. T'was the dawn of a film career and all through the theatre, not a creature was stirring, not even that scorpion. ...Enter the Scorpion King (2002) in Archer's line: "King, exactly and unless you want to spend the rest of the afternoon with a bunch of Scorpions..."

Episode 3 ("Heart of Archness, Part 3"):
Enter our favourite pirate mutineer, Bucky, as he begins a very famous monologue quite similar to the "How many times did I fire my gun?" speech from Dirty Harry (1971).

Another Full Metal Jacket (1987) reference as Lana repeatedly yells "Get Some" while firing an M60 machine gun out of the helicopter as they fly away. 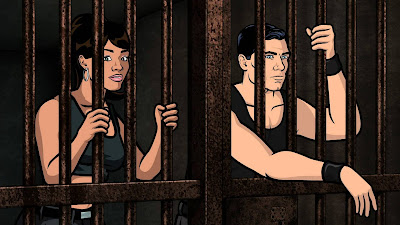 Episode 5 ("El Contador"):
You know what is better than hunting caged tigers? Just, you know, the ultimate in game hunting of course: man. Archer and Lana piss off the wrong psycho, and he takes a page from Richard Connell's book, The Most Dangerous Game (adapted to the screen in 1932 by Merian C. Cooper and Ernest B. Schoedsack). I haven't yet been able to track down the film to watch, but it has most definitely been added to my list!

Episode 6 ("The Limited"):
Does anyone come to mind when you think of cheering after smashing or blowing up a train? Think: The Addams Family (1991) and Lana nails it when Archer blows up part of the train with a grenade: "Well thanks, Gomez".

Episode 7 ("Drift Problem"):
Fake drowning, or being fake paralyzed, either way, only one man gets the glory: "Ferris Bueller, you're my hero." Sometimes the simplest references stick the best. (Ferris Bueller's Day Off, 1986)

We're also back into our Lord of the Rings film references when Archer freaks out over his missing car and attacks Woodhouse, who says he's "going all Bilbo-ey" (referring to the film version of The Fellowship of the Ring (2001) when Bilbo saw the Ring around Frodo's neck and momentarily becomes enraged and violent).

With the title of the episode being "Drift Problem, "let's get a Fast and Furious: Tokyo Drift (2006) reference in here for good measure. Pam apologizes to the Yakuza boss "...and again, just really sorry about your nephew," to which he replies, "He knew the risk." A very similar scene plays out at the ending of the film. 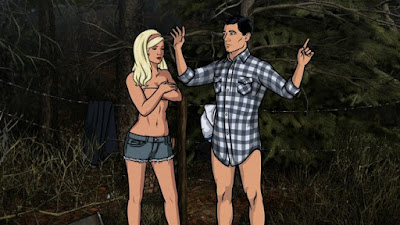 Episode 9 ("Bloody Ferlin"):
Archer, who's idol is Burt Reynolds, mentions that Ray's story is quite similar to the plot of White Lightning (1973).

At one point Cheryl is instructed that if anyone is shot, she is to take a red hot poker and "Slap iron to it," which is a direct quote from Clint Eastwood's character in The Outlaw Josey Wales (1976). Additionally, the closing shoot-out bears striking resemblance to that of the films' final gunfight scene. But to the best of my recollections, many gunfight scenes play out like this in Westerns. (Or maybe I need to watch more of them?)

At the close of the episode, Barry and Katya are riding off on a bus in reference to the end of The Graduate (1967). "Hello darkness my old friend."

Episode 12 ("Space Race, Part 1 and 2"):
Let's start things off by the most obvious. The two part episode is a parody and borrows many elements of the eleventh installment in the James Bond franchise, Moonraker (1979).

We are now entering the Star Wars franchise, and Aliens hour on Archer.

Star Wars: When Cyril crashes during the training simulation Archer yells "Happy, Cyril? You just destroyed Alderaan!" Because the Death Star is a destructive dick.

According to Archer, the bar aboard the Horizon could also be called a Cantina, another name for seedy bar in which Luke and Obi-Wan meet Han Solo.

Archer says he left his lightsaber in his other pants.

Pam's remark that it "was a boring conversation anyway," and is followed by her smashing of the radio, echoes Han Solo's radio conversation in the cell block of the Death Star. 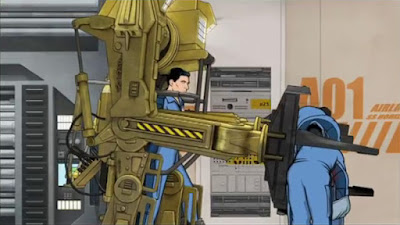 Aliens: It's the ultimate dream, to fight your mortal enemy using a robotic exoskeleton. The Barry vs Archer galaxy match, right? Definitely referring to the awesomeness of the final fight scene in Aliens.

Archer's armor even features a skull and crossbones design on the chest, which is mostly identical to that on the armor worn by Private Hudson.

When Archer is locked in the cargo hold and he is repeatedly ricocheting a baseball off the floor and wall, it is Steve McQueen in The Great Escape (1963) through and through.

And finally, to end this season:

Episode 1 ("Fugue and Riffs"):
The opening scene of this episode is quite similar to a scene in A History of Violence (2005) in that a seemingly normal man kicks a bunch of serious ass in a brutal disarming of his would-be attackers. Best part: face to grill.

Episode 2 ("The Wind Cries Mary"):
Using her knife to cut off his shirt, Lana tells Cyril to "Get naked. Panties too," in reference to that horrifying rape scene in Deliverance (1972).

Episode 3 ("Legs"):
This episode is full of cyborg, robot and sci-fi awesomeness.

Who's making a "Gay Terminator?" Why Krieger is, of course, and Archer is having none of it. Poor Ray.

One Terminator reference is never enough, so after the explosion destroys the room, Cheryl being ranting about smashing the defines grid to Skynet.

After Archer falls from the air ducts, (having been trapped there all weekend), he is naked, demanding and all Terminator-y: “Your clothes, give them to me.”

Another great observation made by Cheryl this episode. While discussing the intelligence of cyborgs, she mentions that would need to be "pretty smart to fool the ol' Voight-Kampff machine." The machine being referenced is used to determine if someone is a genetically engineered organic robot (aka a Replicant) in Blade Runner (1982). 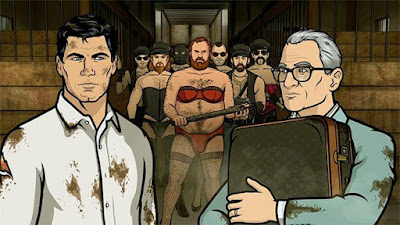 Episode 4 ("Midnight Ron"):
Clearly a play on Midnight Run (1988), and the main characters run through a similar set of transportation getaways... Although they are being chased by the mafia and not by truckers in super sexy heels.

An episode about hopping various means of transportation wouldn't be complete without a visual hint of Planes, Trains and Automobiles (1987), which we get when Archer and Ron find themselves in the back of a milk truck.

We all know about Archer's fixation with his mother, and Ron calls him on it: “Paging Dr. Bates, Dr. Norman Bates.” Because we all want to keep our mothers to ourselves... Do we not? (Psycho 1960).

Episode 6 ("Once Bitten"): This episode bounces everywhere, from Lana and her clomping around being reminiscent of an AT-AT (Star Wars: The Empire Strikes Back), to Archer's “the lambs are screaming!” comment while having violent poops (referring to The Silence of the Lambs).

Not to mention during a hallucination brought on by being bitten in the scrotum by a snake, Archer sees gators all over the road and both Ray and Cyril turn into alligator people, which instantly brought back Fear and Loathing in Las Vegas (1998) for me.

As most of this episode is comprised of hallucination induced flashbacks in a very dream-like manner, there is plenty of room for references from all across the board. After witnessing a gut-shot scene he complains, “What fricken movie is this?! What's next, Mr Gower slaps me deaf?!” referring to one of my favourite movies, It's a Wonderful Life (1946), and the scene in which George is slapped in the ear.

That same gut-shot scene is quite similar to that of Robert Redford's in The Natural (1984), with the injury result in the end of both of their sports careers.

When you think of a needle being stabbed into someone's chest to save their life, does that iconic moment in Pulp Fiction (1994) immediately come to mind? It does for me! How else would you give someone anti-venom for a snake bite?

After the ambassador is murdered, Cheryl comments, “I'll have what he's having.” (When Harry Met Sally, 1989) 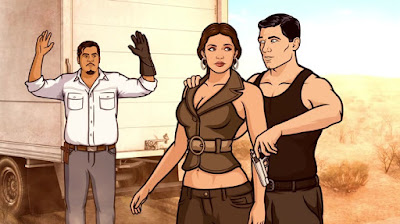 Episode 8 ("Coyote Lovely"): After Archer handcuffs Cyril and Lana together he comments, “Just like the Defiant Ones.” This is a reference to the film The Defiant Ones (1958), in which two prisoners (Sidney Poitier and Tony Curtis) escape from prison while being shackled together.

Episode 10 ("Un Chien Tangerine"):
One giant, gastrointestinally disturbed dog, one giant mess. Being the problem solver that he is, Archer suggests that they feed Kazak (the dog) to Cujo, the titular character in Stephen King's story about a giant murderous rabid dog (1983).

While standing on the roof of the moving truck, Archer stomps an AK-47 into his hands visually reminiscent of Schwarzenegger in True Lies (1994).

Episode 11 ("The Papal Chase"):
During this episode, Lana asks Woodhouse if he has enough heroin to get him through his withdrawal, without making him all “Trainspotty.” Heh. Referring to the group of heroin addicts that we follow in Trainspotting (1996).

Wow. While seasons three and four of the series do not necessarily have my favourite episodes in them, they do boast some of the best movie references, in the humour and style that I love. Asshole-y and in your face.
Posted by Patrick Bromley at 5:00 AM