Off the Shelf: Session 9 (Blu-ray) 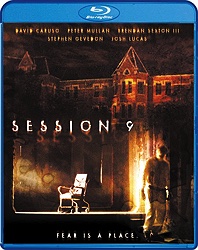 Scream Factory’s stamp of cinematic approval might not carry the weight of the Criterion Collection, but horror fans have come to trust them as a curator of scary movies famous, infamous, and obscure. Director Brad Anderson’s 2001 Session 9 falls into the latter category. The film certainly has its champions, but this will likely be some genre fans’ first experience with this forgotten gem.

The modern horror landscape is a place where low-budget indie movies roam wild and free while big studio fright flicks have largely gone the way of the dodo. In this world ruled by The Babadook and It Follows, Anderson’s creepy thriller might not seem like a big deal. Things were very different in 2001. That a small upstart like Session 9 hung on long enough to be ushered into the Scream Factory fold is kind of a big deal.

It’s important to have that context, because without it Session 9 can feel slight. This isn’t a big concept movie. It doesn’t have a memorable monster or big set piece moments. This story of an asbestos removal crew cleaning up a defunct mental hospital is more about characters and atmosphere than its big twist ending. That final reveal is still effective, but it’s a small part of what makes the movie work.

Session 9 bops back and forth between the crew at work and recordings of split-personality therapy sessions discovered by one of the men. While those tapes provide color and chills, fleshing out the history of the haunted hospital through the story of a notorious patient, they are secondary to the character drama. 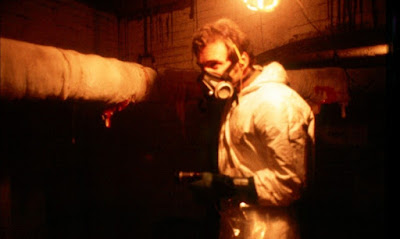 Strip out the creepy tapes and Anderson’s over-the-top visual style and Session 9 is a solid drama about blue collar workers with personal problems. This job is do or die for these guys. Hit the insane one-week deadline and they stay afloat. Miss it and the company is sunk. That’s hard enough, but to do it with a group poisoned by jealousy, rivalries, and ego is near-impossible. It’s a genius touch to have them “shucking fiber.” Asbestos isn’t just dangerous, it’s hidden and quiet and takes years to finish its deadly business. Just like the feelings of desperation that can grow in a man who is stressed on the job and at home, or who has to work alongside his ex-girlfriend’s new beau, or who can’t tell if he’s fooling himself thinking he could ever be something more.

Session 9's chilling story is carried by a handful of actors. David Caruso, Peter Mullan, Josh Lucas, Stephen Gevedon, and Brendan Sexton create believable characters, building a dramatic base for the scary stuff that follows. Although they don’t all get rich backstories, we learn enough in our brief time with them to unpack the baggage they bring to work each day. Some actors have more bloody scenery to chew than others but it would be a spoiler to say who so I'll leave it by saying everyone’s great.

The best character in the movie doesn't have any lines. Danvers State Hospital isn't a backlot set. Opened in 1878, Danvers was a working asylum until 1982, after which it fell into the glorious ruin we see on screen. Anderson and his team had hardly any work to do to dress the set. Everything they needed was in place when they arrived. All the institutional detritus, broken machinery, and haunted history -- just waiting for someone with a camera to pop by. Forget found footage. This is a found location movie and it joins a short list of films defined by where they were filmed, along with Peter Jackson’s Middle Earth New Zealand and Woody Allen’s New York. A very good version of Session 9 could have been made somewhere else, but it wouldn’t be as chillingly authentic as the one set in Danvers. 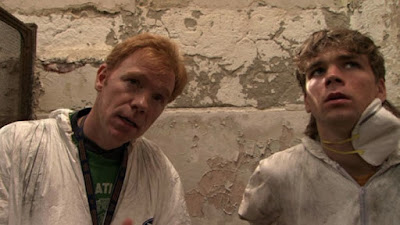 Session 9 was one of the earliest digital films shot at 24 frames per second -- part of what allows the best digital video to look like film. This 2.35:1 1080p Blu-ray transfer is a marvel of crisp detail and color. Fans who have only seen the film on DVD will have fun calling out background details they’ve never seen before. My only criticism of the transfer is that the combination of early digital source material and hi-def makes the movie look a little too clean. A little too much like video, especially in some smeary exterior shots. Even so, it’s a fair tradeoff for an image this sharp. The only audio option is a 2.0 DTS-HD mix. What it lacks in surround sound it makes up for with punch. The audio cues and effects are as important to the fear factor as Anderson's unsettling images, and the lossless mix gets it across loud and clear.

Scream Factory didn’t give Session 9 the Collector’s Edition treatment, but between the ported DVD bonus features and two brand new featurettes, this is a hefty package. First, the new extras:

“Return to Danvers: The Secrets of Session 9” (48:57): This new bonus feature is a lengthy making-of retrospective that explores the film’s production, history, and legacy. A must for fans.

“Horror’s Hallowed Grounds” (20:13): Also new is this episode of the Sean Clark-hosted series that visits famous horror movie locations. This entry is a bit of a cheat. In the 15 years since Session 9 was released, Danvers Hospital has been transformed from a crumbling insane asylum to a luxury apartment complex. Rather than trying to figure out which marble countertopped kitchen was once the site of movie murder, Clark instead shares personal home video from way back when he and a pal busted into Danvers to scope out locations from the film. 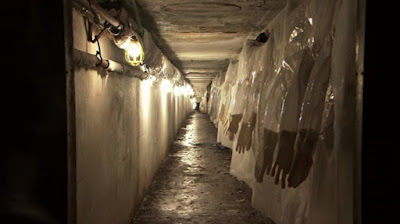 Audio Commentary with director Brad Anderson and actor/co-writer Stephen Gevedon: The first of the previously on DVD extras is a subdued conversation between co-writers about the story, setting, filmmaking, and production. It’s not in the bonus features section, but you can access it from the audio menu.

Deleted Scenes / Alternate Endings (9:40): Available with and without director’s commentary, this short collection of excised scenes are centered around a subplot that was dropped to help focus the story. Watch these without commentary first if you don’t want that subplot spoiled.

Story to Screen (10:01): A largely wordless split-screen video with behind-the-scenes footage on one side and scenes from the movie on the other.

“The Haunted Palace: The Ghosts of Danvers Hospital” (12:54): Danvers experts and cast members discuss their experiences with spirits at the allegedly haunted hospital.

Session 9 is ripe for, well, not reappraisal (fans have been singing its praises from day one) but a second chance now that the horror world has caught up to its indie approach. Sure, more recent scary movies have tackled similar material, but few have matched this alchemical combination of psychological drama and creepy real-world location. There are better-looking current horror flicks as well -- the beneficiaries of the digital video revolution Session 9 got in on at the ground floor -- but this razor sharp Blu-ray transfer makes the film look better than ever. Hats off to Scream Factory for plucking this worthy chiller out of the muck of streaming service also-rans and giving it the attention it deserves.