Review: Beyond the Gates 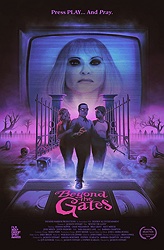 We have reached peak nostalgia as a culture. The '80s have been back in a big, bad way for the last few years, particularly in genre cinema, because we as a fan base are more susceptible to it than most. Your average movie fan doesn't give a shit about a synthesizer score, but horror nerds immediately remember watching John Carpenter movies as a kid and are suddenly more endeared to the nostalgia trafficking than they might otherwise be. I am aware of this at the same time that I am completely guilty of falling for it. Last year's Turbo Kid was one of my favorite movies of 2015, and that's a movie almost entirely rooted in remembering the kinds of movies on which so many of us were raised. Netflix's Stranger Things is all anyone can talk or write self-important thinkpieces about for the last month and a half, and it's not entirely because the show is a masterpiece of storytelling and character development. I mean, that stuff is in there -- and it's good! -- but what people keep coming back to again and again in their discussions of the show is that it "feels like Spielberg" and "feels like Stephen King" and has that "Amblin vibe" and that the opening credits are cool and the soundtrack kicks fucking ass. I am not disagreeing with any of that, nor am I wagging a finger at anyone who enjoys the show for those reasons. I enjoy those things too. But we also need to take a step back and ask ourselves if we've gotten to the point at which a bunch of signifiers pasted together are being given a pass because we like those signifiers, or if we should be demanding more from even our '80s throwbacks? 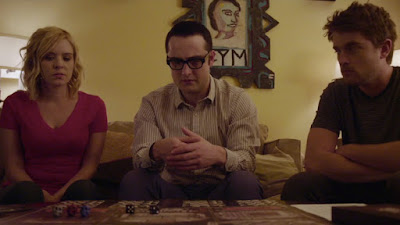 Along comes Beyond the Gates, the debut feature from director Jackson Stewart (written by Stewart and Stephen Scarlata), to answer that question. The movie isn't good because it has a cool synth score or because it deals heavily with VHS tapes or because it features '80s scream queen Barbara Crampton in a prominent role (this besides the fact that Barbara Crampton is associated with much more than just the '80s, because she has done much of her best work in recent years and because Barbara Crampton is and always will be timeless because Barbara Crampton). The movie is good because it is built on a foundation of character, of relationships, of genuine dramatic stakes, of resonant themes of loss and abuse and familial love. The '80s signifiers Stewart includes are just the dressing. So yes, we should be demanding more from our '80s throwbacks. Beyond the Gates proves it by giving us so much more than just an '80s throwback.

Graham Skipper and Chase Williamson play brothers Gordon and John, estranged for years but reunited to clean out the family video store after their father goes missing. Gordon is the more uptight of the two, having fled his hometown as soon as we was able and has spent a lifetime running from demons by attempting to find as much control and order as much as he possibly can, even starting a life with girlfriend Margo (Brea Grant, welcome in anything). John is the fuckup: no savings, no real job, not even a home to call his own, but he's also the one who stuck it out and looked after the family when Gordon took off. Having brothers is complicated.

While cleaning out the video store one day, the boys come across a VHS board game called Beyond the Gates locked away in their dad's private office. Curious as to why their father was hiding the game, they pop the tape in the VCR and press play. The face of a woman (Crampton, who also acts as producer on the film) appears and tells them that they must collect four keys and finish the game if they want to save their father. Unsure if this is some kind of joke or if the game really is sentient and/or haunted, Gordon and John continue to play. And that's when things start to get really weird. And bloody. 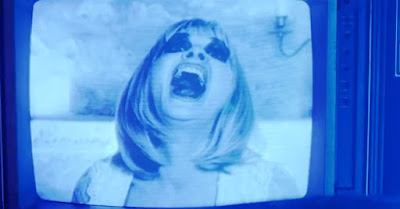 There are three moments of physical contact shared between the brothers in Beyond the Gates, and more than any gore gag or jump scare or special effect it is each of these that are key to the movie's success. As the story unfolds, more is revealed about the trauma in their past both shared and separately; it is trauma that has divided them for years and which is the basis of what they're working through in the course of the movie (like Joe Dante's The Hole from several years back, this is a story about surviving abuse disguised as a supernatural horror movie). Each high five/handshake/hug represents where Gordon and John are at in their lives and in their relationship -- the relationship that provides the emotional spine of the film and the thing in which we are most invested. By the time the story is resolved, it is done so in a way that is so honest and so well-earned that I was nearly moved to tears -- not bad for a goofy movie about a haunted videotape. But it is the seriousness with which Stewart treats the emotional arcs of the characters that gives Beyond the Gates its lasting power; the movie understands that our favorite horror films are those with characters with whom we want to spend time.

I like spending time with Gordon and John in no small part because of the performances of Skipper and Williamson, who both find different and unique ways to play traditional familial archetypes. Skipper gives a different kind of performance than he's delivered in recent genre films: he's harder to read, more internal. He's the uptight brother without just becoming a caricature of the uptight brother. Williamson finds a completely new way to play the fuckup -- he's sweet and utterly sincere, the heart to Gordon's head (and when you compare it to Williamson's leading man work in the upcoming Siren, it's hard to believe it's the same actor in both roles).  Rounding out the triptych is Brea Grant's Margot -- the soul of the trio -- and one of the many things I love about Stewart and Scarlata's screenplay is that it doesn't just relegate Margot to being the put-upon girlfriend in need of rescuing. It is Margot who snaps the family out of their years-long funk. It is Margot who makes the big moves to complete the game. It is Margot who acts as our audience conduit, finding her footing within a situation that dates back to years before she arrived into the mix. I love that she's a strong character, given agency, but who still has made mistakes and put up with things that the movie does not attempt to excuse or justify. These people are works in progress. They're trying to be better, and their greatest appeal is that we love them for their believable flaws, not in spite of them. 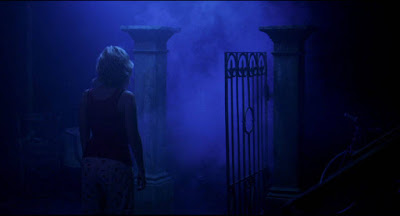 This probably all makes Beyond the Gates some heavy character study that's no fun, which couldn't be further from the truth. The major sense of fun in the movie is what makes it so enjoyable to hang out with these characters, just as it's the well-written characters who make it so that we can have fun. Just because the movie is not pure frosting doesn't mean it doesn't have a shit ton of frosting. Stewart understands that a big part of what endears us genre fans to the kinds of supernatural '80s adventure horror to which he's paying tribute is the characters, yes, but it's also a giddy willingness to go to crazy places. Beyond the Gates does that. The moments of outrageous bloodshed are all the more entertaining because the movie spends its time building up to them, lulling us into a false sense of security that "this isn't going to be one of those movies" before OH SHIT intestines. The dark magic elements are funny because no one -- not us, not the characters on screen -- seems to really have any idea how the haunted VHS game is played. Maybe most fun of all is Barbara Crampton, who, as the game's host, may not have much of a character to play but who scores big laughs with just an extended, dead-eyed stare. She's a patient host. I'll give her that.

I could keep talking about everything I find special about Beyond the Gates, a movie exploding with affection for the kinds of movies that inspired it, but I also know that the degree to which it does or does not connect with audiences ultimately comes down to taste. The film is objectively well written and acted, but some of the technical flourishes like Brian Sowell's photography, soaked as it is in thick blues and pinks, or Wojciech Golczewski's terrific score, help Beyond the Gates add up to a movie that feels like it was made just for me. There is a big difference between understanding that '80s horror is special and understanding why '80s horror is special. Jackson Stewart gets the latter. Most horror films we see these days pay off when the monster is killed. This one pays off with a hug. Given my own tremendous affection for the movie, that seems totally appropriate.

Beyond the Gates will receive a limited theatrical and VOD release from IFC Midnight beginning December 9th.
Posted by Patrick Bromley at 5:00 AM