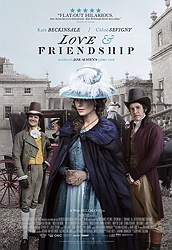 In box #1, there’s action Kate. All of the silly but fun black bodysuit nonsense from the Underworld movies (and by nonsense, I mean that I watched those a bunch of times), which led to less fun nonsense in the form of Van Helsing or Total Recall. In box #2, there’s sideshow Kate, the one who’s a negligible part in bigger movies, from good ones to bad ones (The Aviator, Click), but making minimal impression.

It’s easy to add the contents of what’s above and come to the conclusion that Kate Beckinsale is a cold performer, seemingly always playing a one-note character or one that is simply devoid of normal human emotion. It’s easy to forget the liveliness and energy she brought to her earlier roles in smaller movies; it makes you think that perhaps she just put that behind her.

So I was surprised to see her in the lead of director Whit Stillman’s Love & Friendship, because who could picture Kate Beckinsale in a Jane Austen movie? A comedy? But it works, really well. 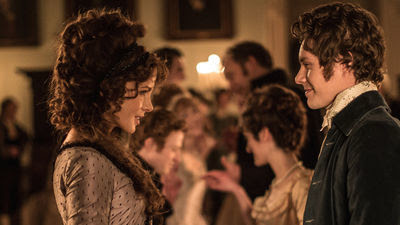 Director Whit Stillman’s movie is based on an unfinished epistolary novel that Austen never published. In the story, Beckinsale plays Lady Susan Vernon, lately widowed, devastatingly flirty, totally Machiavellian, and on the run to maintain a lifestyle in a culture that doesn’t allow women to have an income outside of marriage. After getting kicked out of one household for getting a little too close to the married lord of the manor, she lands with her brother-in-law Charles’s family for the time being. Charles’s wife and her brother are skeptical of Lady Susan’s presence, and the reputation that precedes her. Susan’s daughter gets kicked out of school. Suitors, both suitable and unsuitable, for Susan and for her daughter, come calling. Lies and heartfelt tears are carefully shaped. Lady Susan giggles about it all behind her immaculate lace gloves.

The acting is generally excellent, which isn’t always easy in a very “writerly” movie like this one where the dialogue has the rhythm and cadence of a bygone era, but still has to maintain the particular wit of Austen. I had to admit there were a few moments where I couldn’t quite catch what was said, but was able to catch up as the movie progressed. Beckinsale is at the center of all of it: witty, blunt, and ironic. It’s easy to see how Beckinsale’s aloof persona could be put to good use in a comedy centered on a character who cuts a wide, Machiavellian swath through polite society. She belittles, she lies, she delivers insults with a smile, and then she talks crap about you to her best friend (another Stillman alum, Chloe Sevigny). She’s energetic and really funny, and fun to watch. There is plenty of humor in Stillman’s penchant for “comedies of mannerliness”: the strange disconnect between the civility we present to the world to cover up meanness we have within. Lady Susan is perfectly content to make this dynamic, which so often weighs down the women within her society, completely work for her. She follows her cultural letters to the rule, and breaks away when it means the most to her. 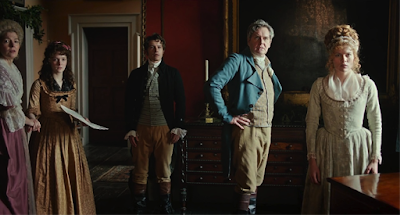 Is she a hypocrite? Of course, and no matter how downtrodden her plight, she’s hardly starving, and adultery is an actually destructive thing, but she’s doing what’s best for herself and her daughter. Is taking advantage of the many dull-witted men (and there are many in this movie) who consistently underestimate her worse than these same men assuming they are immediately her superior? The movie would say no.

Of particular note is Tom Bennett, who plays the kindhearted but dimwitted Lord James Martin; Bennett toes the line between making the character pitiable rather than pitiful. The humor is a broad, but he’s completely believable as a type of suitor that tests whether someone should marry for love or for stability. 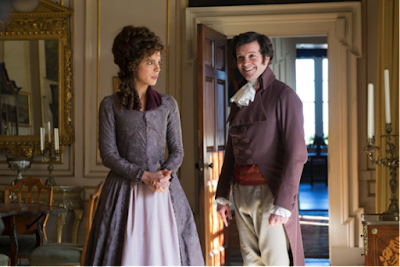 The movie does struggle at time with transitions between scenes; this most likely stems from the original source material being epistolary, so therefore necessarily episodic. It leads to some jarring moments where the audience has to reorient to events that have happened off camera, but I found that this phenomenon smoothed out further into the movie, maybe just because I was better at keeping the characters straight.

Looking back Kate Beckinsale’s filmography, I noticed that she hadn’t really headlined a critically successful film. She’s definitely in some intriguing ones, like Laurel Canyon, or her other collaboration with Whit Stillman, The Last Days of Disco, but never carried the weight of a movie all by herself. And even though there’s another Underworld movie on the way (don’t worry, I’ll definitely end up watching it), Beckinsale, with set design and the screenplay as co-stars, makes the best film of her career and one of my favorites so far for 2016.
Posted by Patrick Bromley at 5:00 AM